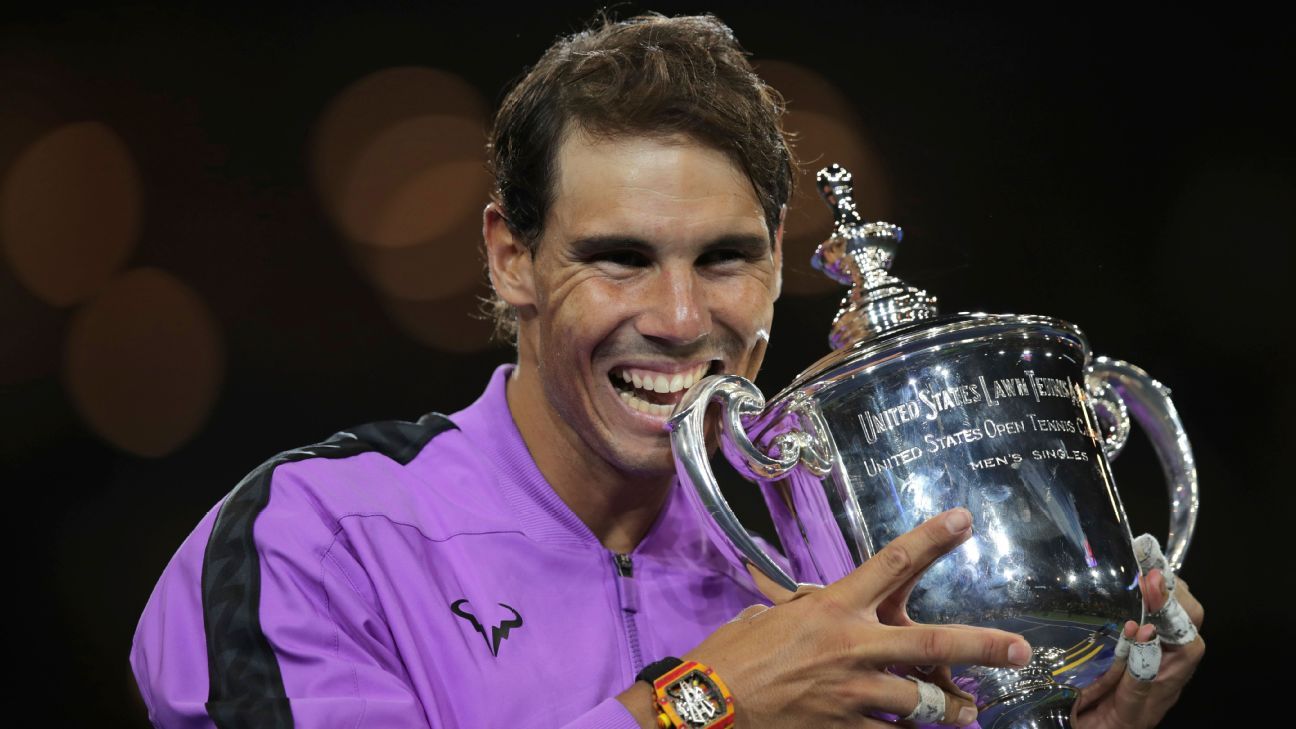 NEW YORK — After winning his US Open semifinal on Friday, Rafael Nadal was asked if he was eager to win the tournament in order to extend the remarkable streak of Grand Slam success by tennis’s Big Four.

Puzzled by the question, Nadal replied: “We don’t need to hold this era anymore. We have been here for 15 years almost. At some point, sooner [rather] than later, this era is going to end. It’s arriving to the end. I am 33 [years old]. Novak is 32. Roger is 38. Andy is 32, too.The clock is not stopping. That’s part of the cycle of life.”

Nadal’s prediction almost came true sooner that he probably imagined — and certainly than he hoped — two days later when he was stretched to his limits in the US Open final by 23-year old Daniil Medvedev. Nadal won his fourth US Open, and 19th Grand Slam title, in the longest match of his 16-year history at this tournament, and the second longest final of his career. The epic struggle lasted four-hours and 52 minutes. Nadal mounting a desperate, fifth-set charge, finally won it, 7-5, 6-3, 5-7, 4-6, 6-4.

Nadal now trails Roger Federer by just one in the Grand Slam singles title count. Given his record at the French Open (93-2, with 12 titles), he is almost sure to win at least one more title at Roland Garros if he remains healthy, while Novak Djokovic (16 titles) will present significant obstacles for everyone at the Australian Open. (Djokovic has won seven of his titles in Melbourne.)

Don’t ask Nadal about this white-hot race to rule the history books, though. He’s been asked if he’s bent on finishing his career as the all-time title champ as often as Tom Brady has been asked when he’s going to retire. Nadal provides the same answer by rote, as he did a few days earlier: “Of course, I would love [it]. But I still sleep very well without being the one who has more Grand Slams.”

It’s a good thing Nadal is not losing sleep over the issue; if he were, he might have a serial nightmare starring Daniil Medvedev, with other under-25 players like Nick Kyrgios, Stefanos Tsitsipas and Alexander Zverev playing supporting roles.

The Big Three find themselves in much the same position as the icon from across the gender divide, Serena Williams, who lost her own US Open final on Saturday to 19-year-old Bianca Andreescu. All are being vigorously tested by emboldened young players. All are learning that beyond a certain age those major titles become elusive, and cherished in direct proportion to how difficult it is to win them in a changing landscape.

This is a fascinating time of transition on both tours, with Williams and the Big Three besieged on all sides. They’re finding ways to get into winning positions but, as Williams and Federer can attest, it gets more and more difficult to close the deal. Williams has made four Grand Slam finals in the six majors she’s been able to play to completion since the start of 2018. Federer has absorbed painful losses in the majors since he last won one, the 2018 Australian Open.

Asked about the transition that appears to be picking up steam, Medvedev prefaced his remarks by saying such speculations are for the experts, not him, to advance. But he went on: “I can say that I’m sure all of us, we’re fighting our best to try to make this transition. It’s really tough because these guys, they are playing good tennis. I don’t know what else to say. They are just playing amazing tennis. We’re just doing our best job to try to make it happen sometimes.”

The transition may be moving slowly, but it isn’t idling. Medvedev has now beaten Djokovic twice this year, and eliminated Stan Wawrinka, another over-30 Grand Slam champ, at this US Open. Tsitsipas eliminated Roger Federer at the Australian Open, while Zverev and Federer share a series record of 3-3. But Medvedev’s performance in the final puts him right at the spear point of the uprising. He went into the final with a spectacular record on the hard courts of summer, 20-2 with four finals including a win at the Cincinnati Masters.

At the start of this tournament, Medvedev’s chances to shine seemed remote considering the heavy workload he had taken on in the preceding weeks. But he showed no signs of fatigue as he matched Nadal blast-for-blast in fast and furious baseline rallies all evening long. It was only at the very end that he seemed to flag, when it might have been mental as much as physical. Even then, his discipline and emotional self-control were striking.

“The year [Medvedev] is having is just very impressive,” Nadal said. “He has a great, great future in front [of him]. I really believe that. He will be able to win Grand Slams, a couple of them, no?”

Medvedev leaves New York looking like the player likely to break the continuing hold the Big Three have on the major tournaments. While Federer and Djokovic suffered signal defeats in New York (Djokovic withdrew with a left shoulder injury), Nadal extended the winning streak of the Big Three to 12 majors.

This may be the autumn of Nadal’s career, but it has all the earmarks of a season of revival. Nadal was the picture of confidence and energy at this tournament, his muscular legs fresh. He even went back to wearing sleeveless shirts at the start of the year, telling ESPN analyst John McEnroe, “It makes me feel younger again.” He won two of the four majors, equalling Djokovic. The Serbian star is still ranked No. 1, but Nadal is now in the running to replace him.

During the trophy presentation ceremony, the USTA played a video on the giant screens in Arthur Ashe Stadium. It was a slam-by-slam tribute and review of Nadal’s accomplishments. He watched with unabashed emotion, the end as well as the beginning of his career on his mind.

Nadal said the video reminded him of all that he had endured to reach this precise moment, and that “still being here” is a very special thing for him. He sounded a little like a person who knows his days are numbered, but has determined to make the best of them.

He certainly did that on Sunday evening in New York. When the finalists met for the post-match handshake, Medvedev said, Nadal told him that he’s an “amazing” player.

The difference is, one of those amazing players is on his way out, the other on his way in.