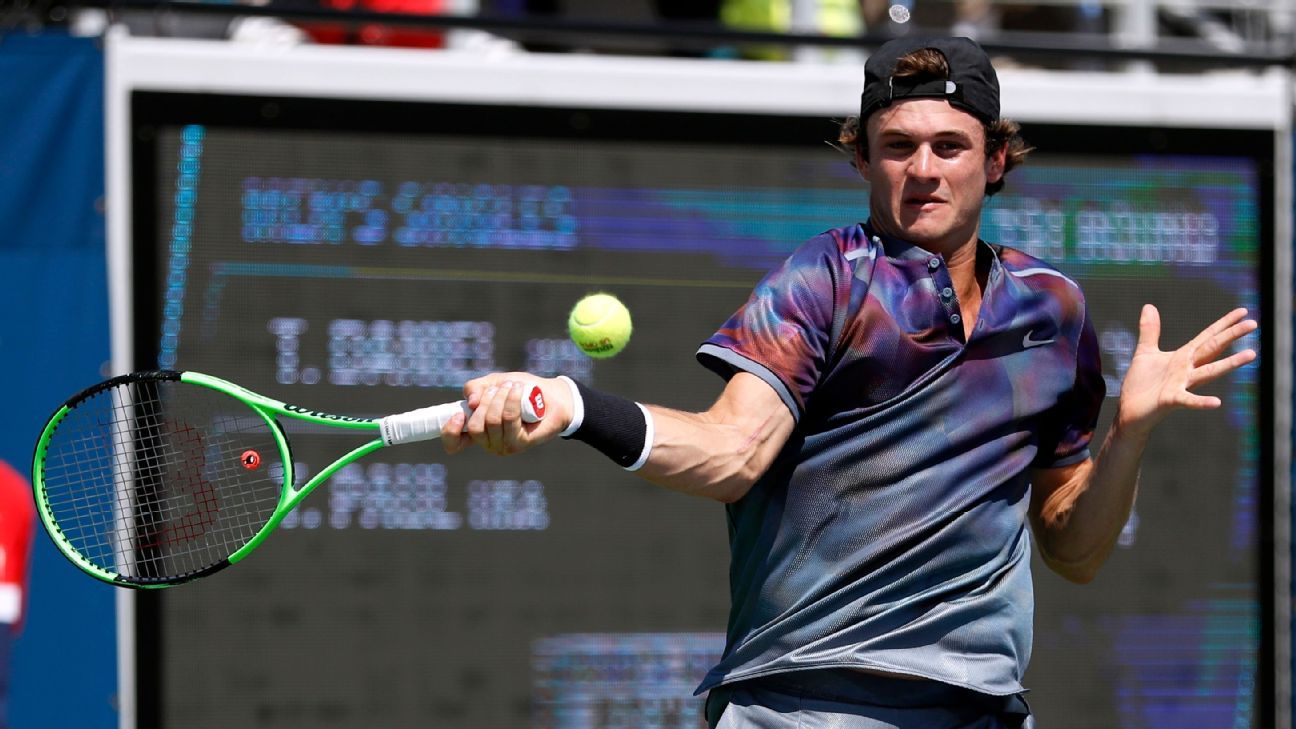 Tommy Paul didn’t do much sightseeing in 2015 during his first-ever trip to Paris. He was too busy becoming just the fifth American to win the junior French Open title.

The evening of that win, Paul and a few friends in the tight-knit group of U.S. juniors did manage to take a Seine River cruise around Paris. But Paul doesn’t remember much about that.

“We were all like really dead by then, we fell asleep on the boat,” Paul, who was also a runner-up in the junior doubles at that Grand Slam, recently told ESPN.com. “We didn’t get back to the dock until around 1 in the morning, so we didn’t see that much.”

No biggie, Paul thought. He would have plenty of time to do the tourist thing in later visits.

Paul has returned to Paris only once, however, as a fledgling pro hoping to qualify for the main draw the following year. That didn’t work out. Nor did his transition to the pros in general. It was a tougher road than Paul had anticipated. But now 22 years old and up to No. 136 in the rankings, Paul is finally back at Roland Garros this year after winning the USTA’s French Open wild-card challenge series.

Paul, 6-foot-1 and solidly built, has had significant if not career-threatening injuries. He also admits that he wasn’t emotionally ready for the requisite discipline.

“I have matured a ton,” he said. “I made some decisions in the past that, looking back, I would take back. I’m just kind of investing in my career a little more now, taking care of my body, stretching, cooldowns, all the professional stuff that needs to be done. I’m taking everything more seriously and trying to do all I can to make it to the top.”

The newfound clarity of Paul’s purpose was accelerated by the way others in his peer group — including Frances Tiafoe, Reilly Opelka and Taylor Fritz (Paul’s opponent in that all-American French Open junior final) — have made steady progress in the ATP rankings.

Diego Moyano, Paul’s longtime mentor and a USTA high-performance coach, said that for a long time it didn’t bother Paul that some of his peers had leapfrogged him, and were basking in Next Gen shine.

“He has a good heart,” Moyano said of Paul. “He likes for his friends to do well. But we got to the point now where he’s thinking, ‘Hey, I belong to that group. I have that level. Why am I not there?'”

It’s a good question. On the “maturity” front, Moyano likes to point to the career of Christian Garin, the now 22-year-old Chilean who defeated Alexander Zverev to win the 2013 French Open junior title. Garin, cut from the same physical cloth as Paul, went over the falls of the ATP rankings in a barrel when he ventured out on the big tour. But he has exploded back to the surface this year, winning two clay-court titles and ranking No. 37 in the world.

In like fashion, if on a smaller scale, Paul seems to be rising to another level. He earned the Roland Garros wild card with a few outstanding performances while still on the rebound from a quadriceps tendon injury that sidelined him for three months. Upon his return, he compiled a 14-2 record in three Challenger tournaments, his best result a win in the Sarasota final over Tennys Sandgren — a 2018 Australian Open quarterfinalist.

“I feel like I made jumps in certain places that aren’t even on the court,” Paul said. “Just, like, mentally. People don’t understand how much of it [doing well] is mental. I didn’t understand myself. I’ve taken more time to work on my mental game as well as my tennis game.”

Paul has had help from Larry Lauer, a USTA sports psychologist based at the organization’s main training facility in Orlando, Florida, where Paul lives and trains when he’s not at his family’s home in Greenville, North Carolina. The game puzzle is still being put together with the help of Moyano, who believes Paul has plenty of upside.

Moyano lauds Paul’s basic athleticism, his powerful forehand, his movement (the key to his proficiency on clay) and much-improved serve. Paul added about 12 mph to his average serve speed in the late winter of 2017, raising his average speed to roughly 120 mph. He tops out at around 135 mph. The improvement came at a cost, though. Paul developed a stress reaction in his right, serving-arm elbow and was sidelined for five months in 2018.

Moyano believes Paul can “clean up” his already excellent movement. He also sees a lot of room for improvement in Paul’s transition game and volleys, even his already refined serve. “The serve is not even close to the ceiling,” Moyano said. “He’s serving good, but [his first-serve conversion] percentage is under 60 percent. He could be at 65 percent because he has that excellent motion, everything that needs to be there.”

Paul, who was born in New Jersey but grew up in Greenville, describes himself as a “hard Eagles and Sixers fan.” He developed his game on the slippery green Har-Tru clay, which is a little faster than European red clay, because those were the only courts at his stepfather’s Courtside Athletic Club.

“There wasn’t much going on, tennis-wise,” Paul said. “It was just me and my sister [Jessie], and we kind of built it, along with my mom and stepdad.”

On one of his first visits to a USTA training center where clay courts were featured, one of the coaches examined Paul’s shoes and advised him to get some designed for play on clay. “I had grown up playing on clay,” he said, “And it was the first time I heard there was such a thing. I got some and it was like, ‘Wow, there’s so much more grip now.'”

Paul would go far in those shoes, or ones like them — all the way to the trophy presentation ceremony at Roland Garros. Now that he has matured, he seems ready to follow in his own footsteps.

Helwani on why verbal deals should be scrapped, sensible welterweight bouts, UFC 250
Gilbert Burns becomes a contender and other takeaways from UFC Fight Night
Stenhouse looks to Bristol to build momentum
Re-drafting the top picks in every MLB draft from 2010-2019
Throwing to buddies and living at home, Joe Burrow’s NFL journey starts with an audible