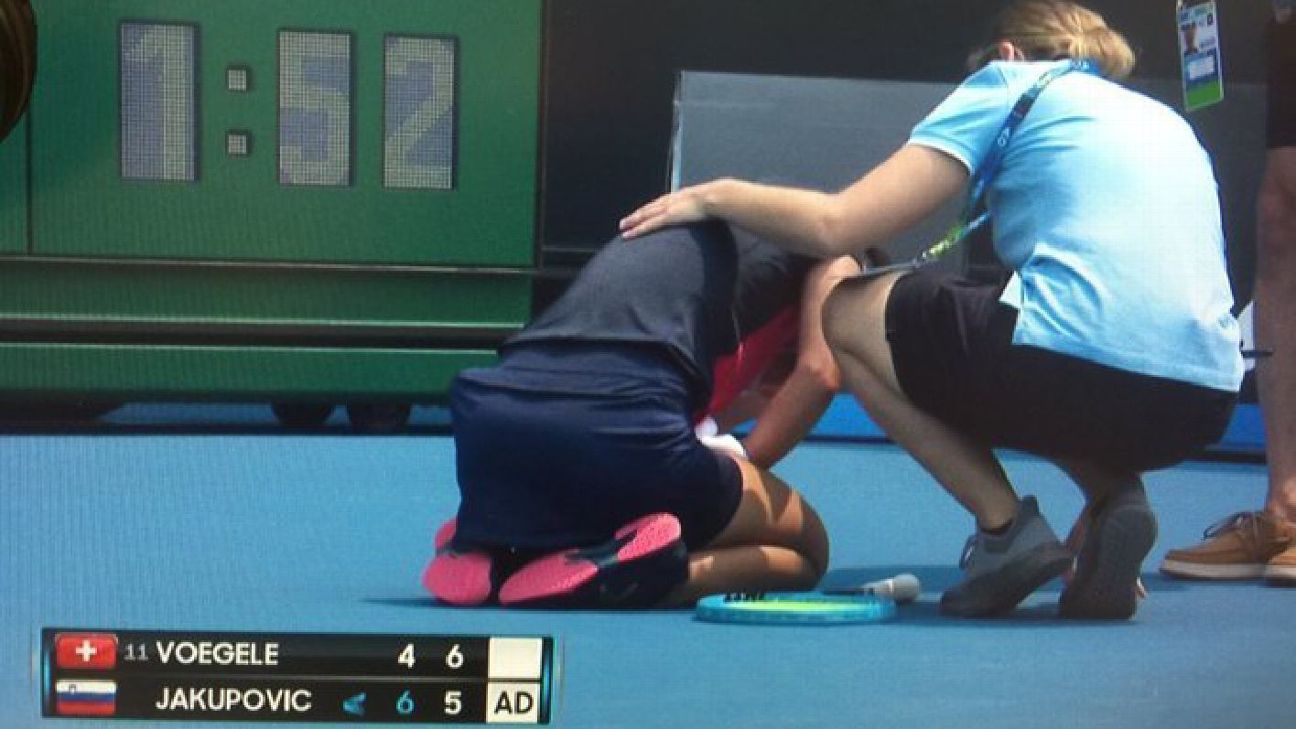 Slovenia’s Dalila Jakupovic feared she would pass out during Australian Open qualifying with the smoky conditions the worst she’s experienced.

The world no.180 was forced to retire mid-match at Melbourne Park on Tuesday due to the hazardous smoke lingering from bushfires in Victoria’s east.

Jakupovic was leading her round one Open qualifying match against Switzerland’s Stefanie Voegele when she collapsed to her knees with a coughing fit.

“I was really scared that I would collapse. That’s why I went onto the floor because I couldn’t walk anymore,” Jakupovic said.

“I don’t have asthma and never had breathing problems. I actually like heat.

“The physio came again and I thought it would be better. But the points were a bit longer and I just couldn’t breathe anymore and I just fell on the floor.”

Jakupovic said it was “not fair” that officials asked players to take the court in those conditions.

“It’s not healthy for us. I was surprised, I thought we would not be playing today but we don’t have much choice.”

The first day of qualifying was delayed and practice suspended as Melbourne’s air quality ranged from hazardous to poor on Tuesday morning.

Play eventually got underway at 11am – an hour later than scheduled – after the city’s air was the worst quality in the world overnight because of the bushfires in the state’s east.

It’s an obvious concern with the world’s eyes set to be glued on Melbourne during the two-week championship from Monday.

Thousands of international visitors and Australian tennis fans will also throng to the precinct.

Health authorities expect the air quality to bounce between the “very poor to hazardous range” until at least Wednesday night.

Tennis Australia boss Craig Tiley said when it became obvious smoke could have an impact, officials had to act for the welfare of all involved – players, fans and staff.

TA says it will work with their medical team, the Bureau of Meterology and Environment Protection Authority Victoria scientists when making decisions about whether it’s healthy to play.

“This is a new experience for all of us in how we manage air quality, so we have to listen to the experts,” Tiley said.

“We have now real time raw data that we can collect – we have installed measuring devices on-site for air quality.”

TA chief operating officer Tom Larner said any smoke stoppages would be treated in the same way as an extreme heat or rain delay.

“We will stop if conditions become unsafe based on medical advice,” he said.

At the Kooyong Classic, players and officials decided to stop play between Maria Sharapova and German Laura Siegemund at 5-5 in the second set due to the smoke.

Novak Djokovic spoke out about the smoke situation last week, saying organisers will be forced to create new rules to deal with smoke.

“People from my team have spoken to Craig Tiley. They are obviously tracking the situation every day as it is evolving,” Djokovic, who is also the ATP Player Council president, said.