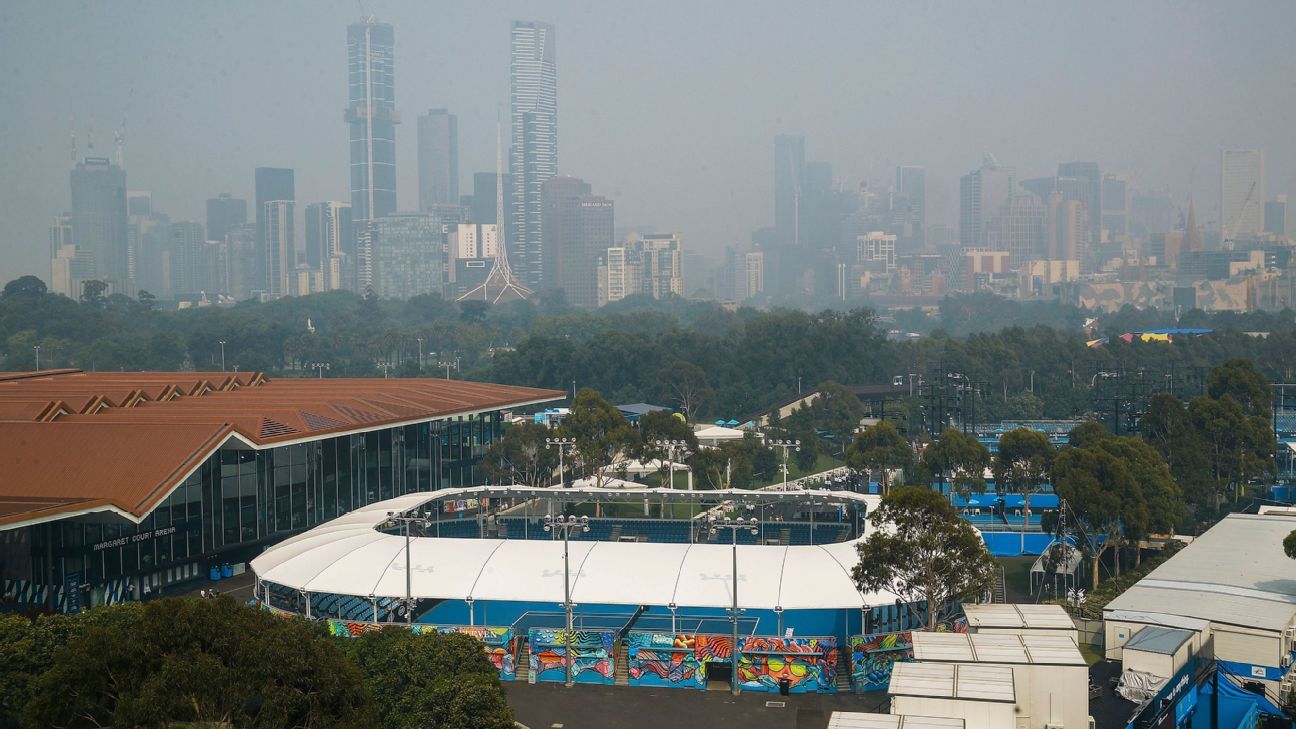 As the Australian Open prepares to begin play Monday, tournament officials face a potential environmental crisis as a result of Australia’s ongoing bushfires.

Smoke continued to blanket the city of Melbourne on Wednesday, delaying the first two days of qualifying.

Tennis Australia boss and Australian Open tournament director Craig Tiley said that when it becomes obvious smoke could have an impact, officials are prepared to act for the welfare of all involved — players, fans and staff. Tennis Australia said it will work with its medical team, the Bureau of Meteorology, and Environment Protection Authority Victoria scientists when making decisions about whether it’s healthy to play.

Here are some frequently asked questions regarding the impact the bushfires may have on the first Grand Slam of the year:

How close are the fires to Melbourne?

Melbourne, home of the Australian Open, is the capital and most populous city of Victoria, one of the six states that make up Australia. The city is in the southeast corner of the country along the coast where most people live and most of the bushfires have been burning. The major cities have largely been spared, but dense smoke has caused severe problems in some places like the Australian capital of Canberra. An ATP Challenger event scheduled for Canberra in early January had to be moved about 400 miles west to Bendigo because of excessive smoke in the atmosphere.

On Dec. 30, about 100,000 people were urged to flee five Melbourne suburbs as a heat wave combined with high winds left the city suffocatingly hot and dense with smoke. One firefighter was killed on the outlying countryside. While fire is the preeminent danger, smoke — sometimes driven over great distances by wind — is a more sinister threat that cannot be fought.

The situation in the state of Victoria has forced @vicemergency (the state’s official alert system) to issue at least one recent emergency warning of “imminent” danger from a bushfire for Noorinbee, 230 miles east of Melbourne. “You are in danger and need to act immediately to survive,” the warning said.

Will it be safe to attend the Australian Open?

There appears to be little danger from fires at the moment, but heat is always a factor Down Under. This year, smoke and the toxic elements it carries is an active concern, especially in combination with the familiar Melbourne heat.

The city has already closed a number of beaches and pools, sporting events have been canceled and construction workers have been forced to abandon outdoor projects. Ambulance calls for people struggling to breathe also have risen significantly.

The smoky days at the start of the new year spurred many people to purchase P2 and N95 masks. The Australian Medical Association has advised people with pre-existing lung or heart conditions as well as those sensitive to smoke to take special precautions. Many have purchased the common, relatively inexpensive, small respirators that slip over the nose and mouth commonly used by house painters, woodworkers and others. Visitors to Australia have been advised to bring their own.

How will Tennis Australia determine whether conditions are safe for the players?

In a statement issued to the media on Jan. 6, Tiley stated: “There will be meteorological and air quality experts onsite to analyse all available live data and assess in real-time the air quality at Melbourne Park, and we always work closely with our medical personnel and other local experts.”

On Tuesday morning, with Melbourne’s air quality officially ranked as the third worst in the world, Tiley and chief operating officer Tom Larner fronted a hastily arranged media opportunity to ensure that the tournament would act in the best interests of the players, fans and staff.

“This is a new experience for all of us in how we manage air quality, so we have to listen to the experts,” Tiley said.

The highest AQI index ratings in Australia during the bushfires were recorded on New Year’s Day, all in Monash, where the AQI peaked at 5,185 — more than 25 times above hazardous levels.

The AQI reading from the station nearest Rod Laver Arena on Monday morning was 427, which is considered “hazardous.” At the same time, the AQI in New York City was 47 (good).

Due to the constant threat of excessive heat, tournament officials have established sophisticated protocols for measuring conditions, including the WetBulb Globe Temperature (WBGT), and the tournament has a transparent extreme heat policy in place. It features a five-step Australian Open heat stress scale that measures heat-related factors that trigger a variety of remedial actions, from brief breaks to suspension of play site-wide.

Over the years, those protocols have evolved from a simple dictate in 1998 to suspend play when the temperature hit 104 degrees Fahrenheit to a suite of responses depending on the temperature and WBGT index (which takes factors other than temperature, including humidity, into consideration). The measures include closing the roof on covered courts during day matches, heat-mandated 10-minute breaks between sets and stoppages of at least two hours.

The athletes have various ways to deal with heat, including iced towels, appropriate headgear, misting fans, frequent changes of clothing, and strategies that include prematch hydration at hourly intervals, salt tablets, etc. But there’s little anyone can do to mitigate for air quality. Masks may help, but they impair oxygen intake. Inhalers that soothe sore throats might provide temporary relief from soreness but they could also mask the damage being done.

Tennis Australia has never had an air quality policy because it has never before been a significant issue. The one Tiley articulated seems vague and, ultimately, subjective. The players have noticed.

“If it continues the same way and if the quality of air is affected in Melbourne or Sydney, I think Tennis Australia probably will be forced to create some rules about it,” Novak Djokovic said at an ATP Cup news conference earlier in the month.

Do the ATP and WTA have protocols of their own to safeguard their players?

Both the ATP and WTA have told ESPN.com that they are leaving decisions about the playing conditions in the hands of Tennis Australia. But Djokovic did tell reporters that he put air quality considerations on the agenda at the annual player meeting that precedes the tournament.

That’s a good idea, given Tennis Australia’s lack of a transparent mechanism for determining when to pull the plug on play due to hazardous air quality.

While practicing in Melbourne during the worst days of smoke in early January, Denis Kudla told The New York Times, “If it’s anything like yesterday, I don’t think it would be safe over a two-, three-week period. You could play [in the Australian Open], but who knows what damage we’re actually causing ourselves? It can’t be good.”

What recourse does the tournament have in the event that the air quality halts play?

It sounds far-fetched, but in a worst-case scenario, the Australian Open could become the first hybrid outdoor-indoor tournament. That’s because the National Tennis Center has four roofed stadiums as well as eight indoor courts. The air circulation systems in the roofed venues includes some filtration, but earlier this month in Sydney the smoke overwhelmed some air-conditioning units and triggered smoke alarms indoors in some buildings. Tiley said, “[We have] effectively weatherproofed the Australian Open.”

We may yet see whether that also means they have smokeproofed it.

How are the players feeling about the weeks ahead and the challenges they may face?

During Tuesday’s qualifiers, smoke and hazy conditions at Melbourne Park affected the players, with organizers criticized for allowing matches to proceed. The start of qualifying was delayed by an hour due to the smoky haze, but practice sessions were canceled.

A number of players complained, including Australian Bernard Tomic, who sought medical treatment during his first-round loss when he struggled to breathe. Slovenia’s Dalila Jakupovic said she feared she would pass out before retiring from her match when she collapsed to her knees with a coughing spell.

“I was really scared that I would collapse,” Jakupovic said. “That’s why I went onto the floor, because I couldn’t walk anymore.

“I don’t have asthma and never had breathing problems.”

Qualifier Noah Rubin tweeted a screenshot of the AQI for Melbourne showing a value of 559. Maria Sharapova and Laura Siegemund had to quit in the middle of their exhibition match at nearby Kooying.

On Wednesday, Australian Open officials delayed play by three hours during qualifiers, but the air quality index was still graded as “unhealthy” when the players took to the court due to the smoke.

Canadian world No. 103 Brayden Schnur, the third seed in the qualifying tournament, was critical of officials after his first-round win over Austrian Sebastian Ofner, which took more than two hours in the hazy conditions on Wednesday.

“You feel super dryness in your throat,” Schnur said. “That’s 100 percent not normal, and players who have asthma are at a huge disadvantage right now.”

Canadian player Vasek Pospisil said the situation was “absurd” and it was “time for a players’ union.”

Tiley addressed the criticism from players on Thursday, saying: “Our medical team were satisfied with the conditions that the players were competing in [in qualifying], per all of the research and the data and the science that they have.

“But they also make an assessment. You could have been two hours into those matches and have 25 people presenting themselves with a medical condition that may be related to the pollutants.

Despite the concerns, many of the top tennis players have vowed to support Australians suffering because of the bushfires.

Nick Kyrgios got the ball rolling when he pledged to donate $140 (U.S.) for every ace he hit during the ATP Cup. Scores of ATP and WTA players followed suit. Serena Williams donated her $43,000 ASB Classic winner’s check to Australian wildfires victims. The ATP donated $725,000 on behalf of the players, and the ITF will contribute an additional $400,000.

Roger Federer, Rafael Nadal, Kyrgios, Williams and others took part in a Rally for Relief bushfire charity exhibition at Rod Laver Arena on Wednesday night that, according to Tennis Australia, raised nearly $3.5 million for the bushfire relief effort. The event drew a capacity crowd of more than 15,000. During the event, Nadal announced that he and Federer would combine to donate $250,000. But despite the drive to support the bushfire victims, Federer and Nadal faced criticism from Schnur for failing to step up and protest against playing conditions during qualifying.

Information from AAP and Reuters contributed to this report.