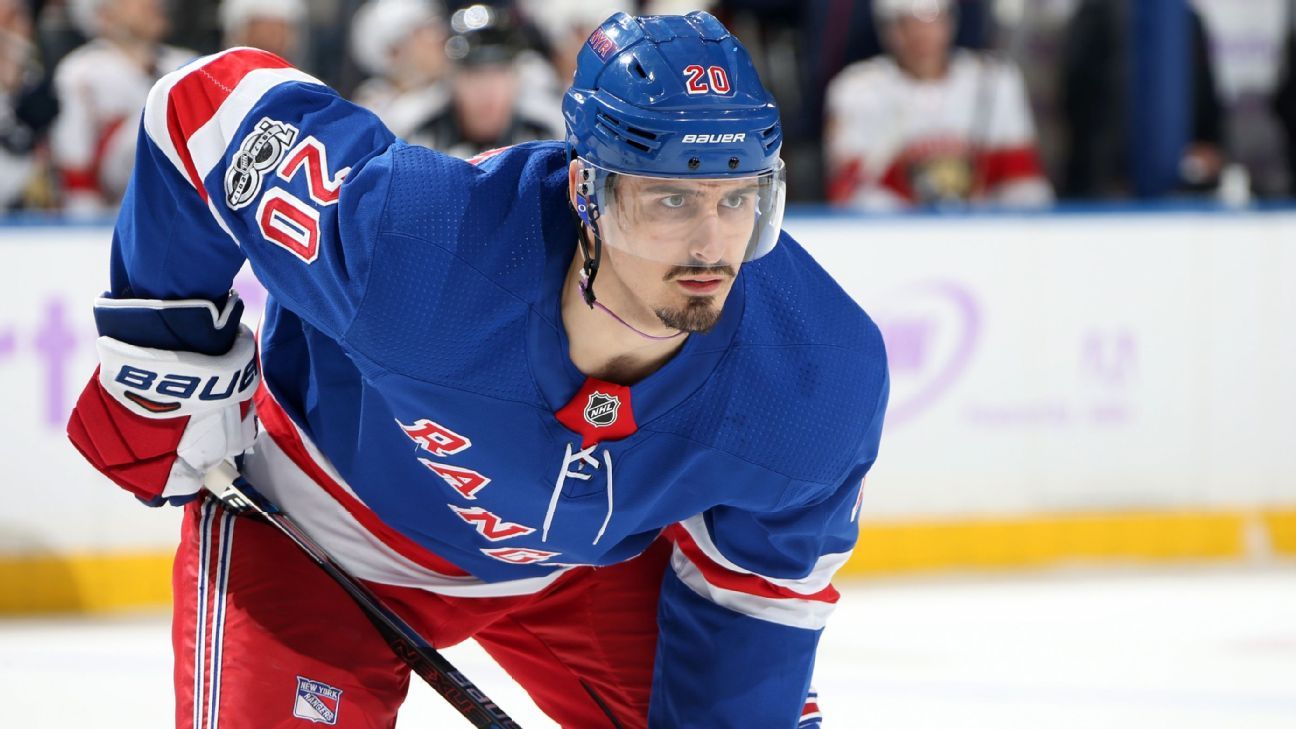 It began late last fall, when he began coughing up blood. It would happen randomly for New York Rangers winger Chris Kreider. For a few days, he’d be symptom-free. Then Kreider would wake up and spew blood, then break out in coughing fits throughout the day that he describes as “pretty gruesome.”

The 27-year-old knew something wasn’t right. When he was on the ice, he sometime felt a shortness of breath — like his cardio wasn’t all there — and sustained light-headedness, too. But it was the time of year where everyone would get sick, especially road-weary professional hockey players, so he didn’t blame doctors for a misdiagnosis of pneumonia.

Two days after Christmas, Kreider woke up and felt numbness in his right arm. He examined his arm at his house, and couldn’t help but think it looked discolored. It was game day — the Rangers were hosting the Washington Capitals — so when Kreider arrived to the rink for morning skate, he received treatment. But when he returned later that night for the game, his arm looked twice its normal size — and purple. He logged seven shifts in the first period, and when he returned to the locker room and took his gloves off, his arm was now three times its size. Team doctors examined, and sent him right to the hospital.

That’s when he first heard the words “blood clots.”

“Everyone knows the severity of blood clots and what that can lead to,” Kreider says. “The minute they said ‘blood clot,’ I saw this season as a write off. Hockey became secondary very quickly. A lot of doctors were trying to explain to me when I could possibly come back, and dancing around it. I had to explain to them: ‘I’m not totally worried about that at the moment. I just want to get healthy.'”

Kreider always knew he had a malformed collarbone, though he was told it was simply aesthetic, and wasn’t an issue. Now he was told he had a malformed rib, and that was a problem. Doctors believed his first rib was fused to the second, so Kreider underwent an arthroscopic surgery to clear up the vein. But the clot came back pretty quickly. Doctors described Kreider’s vein as “ratty” after years of the physical toll of training.

So, they decided to do a second arthroscopic surgery a few days later. He stayed in the hospital for another day and a half as he went on a blood-thinner that could hold closer to the procedure, then doctors resected the first bone and the bridge connecting it to the second. He ended up staying in the hospital for five days.

Kreider insists he wasn’t in much pain, but going under anesthetics with two procedures so close together, his body felt weak and banged up. “It was the constellation of symptoms over that fall that were more harrowing,” Kreider says. “Once they figured out the problem, it wasn’t an easy fix, but it was simple. Just tell me I’m not predisposed to blood clotting and I’ll be happy. I knew if I had to be on thinners all the time, it would be limiting.”

When Kreider was released from the hospital, he relaxed — or, rather “tried to relax the best I could,” he said. He also spent time with his parents, “something you’re not always afforded with our busy schedule.” He was cleared to travel a few weeks later, and went to Florida with his mother and father.

“It’s strange, getting away from the game for a bit,” Kreider says. “I can’t remember the last time I had that long of a break. At the same time, it was hard watching everything our team went through in that period of time.”

Kreider missed nearly two months. The Rangers lost 17 of 24 games in that stretch, tumbling out of the playoff picture — meaning they would miss the postseason for the first time in eight years — which also reset expectations for the future. Kreider helped Boston College to a national championship in 2012 and shortly after, joined the Rangers for their playoff push. He tallied seven points in 18 games before New York was eliminated in the Eastern Conference finals. Since then, the Rangers had contended for a Stanley Cup. Until now.

As Kreider watched the championship window figuratively closing, he knew the only thing he could control was his recovery. When doctors cleared him to ride a stationary bike, he became obsessed, pedaling for “probably much longer” than doctors had suggested.

He also became meticulous about what was going into his body. Since he was on anticoagulants, he was careful of the limitations. Poring over online literature and books on nutrition became a hobby — at the very least, something to help the time go by.

“The whole concept of having a rib removed and clearing out my lungs which had infarctions in them, I went down a health rabbit hole,” Kreider says. “It wasn’t hard to stay motivated because you want to feel like you’re in control.”

He ended up adopting his own blend of the plant paradox (which eliminates gluten and foods that contain lectin) and the keto diet (a popular fad that minimizes carbs and says yes to fats). “I think that ultimately helped me come back pretty quickly compared to what the doctors expected,” he says.

While Kreider was cutting out foods that he normally thought was healthy — such as whole wheat products and brown rice — he warns: “Diets can be a little dogmatic. People stick to their guns a little too closely. It’s important to remember everyone’s body is different.”

Finally, Kreider was cleared to skate (alone, very lightly) in February. He couldn’t use his arm at all, which was still tender after surgery. And then, he was able to skate with his stick.

“It honestly felt like I had never stickhandled in my life,” Kreider says. “The nerve in my elbow and the nerve in my shoulder were beat up. My grip strength is not the same in my right hand. I did a little work and it got significantly better every day, but even today, it’s still not where I want it to be.”

On Feb. 23, he suited up for the first time — far ahead of any doctor’s timetable — in a game against the Minnesota Wild.

“I had trouble choking back tears when the anthem was playing,” Kreider says. “When you’re in the NHL, you’re stuck in this maze where everyone is hyper competitive. You live and die with wins and losses. Then you get out of the maze and it changed my perspective for the better. Your career goes by so fast. This was my first opportunity to step back and see that. If you can’t be grateful playing in the NHL, shame on you.”

During the first period of that game, Kreider remembers coming out of the Rangers’ zone with the puck, and feeling as if he had an extra hop in his step. He was lighter after all, having dropped 20 pounds since his surgeries. Though he lost some upper-body muscle mass, he loved how fast he felt, and said he might maintain a lower weight going forward.

“That game, my heart was beating out of my chest,” Kreider says. “It felt like my first pro game all over again. A lot of emotions.”

Things didn’t slow down from there. Earlier in February, Rangers management published an open letter to fans, essentially admitting to a rebuild. Within three days of Kreider’s return, New York’s roster was wildly different. The Rangers dealt away captain Ryan McDonagh, J.T. Miller, Rick Nash, Michael Grabner and Nick Holden. It was an awkward juxtaposition.

“I was walking around with a huge grin on my face, like an idiot, because I was just happy to be there,” Kreider says. “And it was at such a tough part of our season. Everything was changing.”

Kreider is now accepting the new reality of the Rangers, and his new role: as a leader. He’s just 27, but now the fourth-longest tenured player on the roster.

“Your team always changes a little more than you think it’s going to, but this [coming] year our team has changed a little less than people expected to,” Kreider says. “We have a lot of guys back. Obviously a lot of big pieces gone, but it’s a young group, and an exciting group, and a group that’s going to grow up together — because we’re forced to. The NHL is not a developmental league, you have to win hockey games.”

Entering next season, after everything he came back from, Kreider sounds enlightened by what he went through, and the challenge ahead.

“You want to take advantage of the time at this level and understand nothing is given,” he said. “You have to fall in love with the process.”