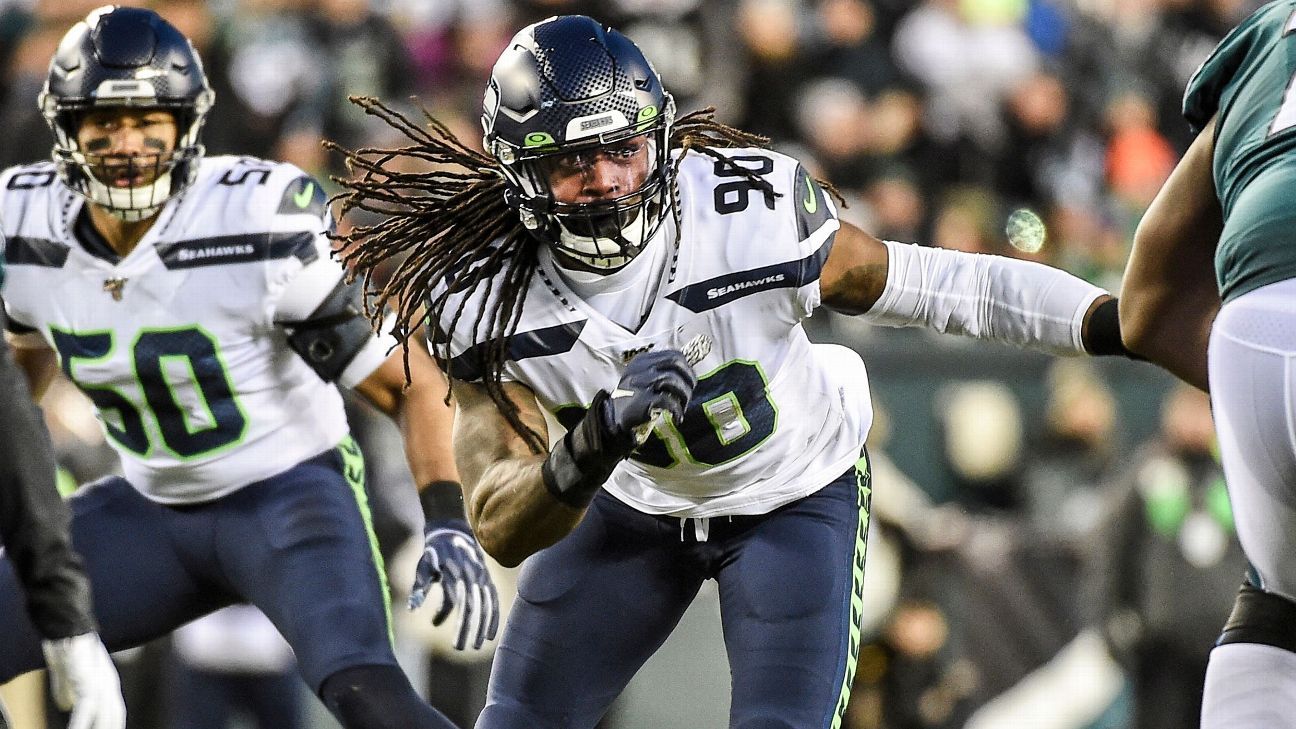 Now there’s a copy/paste sentence that has been used every year since 2006, the year John Abraham was traded to the Atlanta Falcons.

A couple of high-profile pass-rushers in this year’s free-agent class, Jadeveon Clowney and Yannick Ngakoue, are still without a team, but there’s little chance of either one winding up with the Jets. That hasn’t stopped the rumors from swirling — this is the silly season for speculation — but the more likely scenario is the Jets attacking the problem the old-fashioned way, by developing what they have and hunting for a contributor in the draft.

Failing those methods, the Jets have to hope defensive coordinator Gregg Williams can use his smoke and mirrors (again) to generate pressure on the opposing quarterback.

What you need to know about the New York Jets:

General manager Joe Douglas, speaking to reporters Wednesday for the first time since the scouting combine, didn’t want to play the hypothetical game with regard to Clowney or any other free agents. Douglas pivoted quickly from that line of questioning, noting he was “very excited” to re-sign linebacker Jordan Jenkins (team-high 8 sacks), albeit on a one-year contract.

“Love the production that he’s had in his first few years in the league, and talk about one of the best locker room guys we have,” Douglas said. “I can’t tell you how excited we are to get Jordan. We’re going to look at multiple positions throughout the rest of free agency and the draft. If there’s an opportunity for us to upgrade, I think we have the flexibility to do it.”

Aside from Ohio State’s Chase Young, the chalk pick for the Washington Redskins at No. 2 overall, the draft doesn’t include any more elite edge rushers. The Jets probably will go offense with the 11th pick, either offensive line or wide receiver, leaving the pass-rushing issue for the later rounds. In his latest mock draft, ESPN analyst Todd McShay has them selecting Auburn defensive lineman Marlon Davidson in the second round, but he’s more of an interior player than an edge threat. Michigan defensive end Josh Uche, an underrated speed rusher, would be a nice get in the second round.

Truth is, it’s extremely hard to find a pass-rusher in the draft. No one knows that better than the Jets, who have tried and failed in recent years with second- and third-day picks (Lorenzo Mauldin, anyone?). Since the Abraham trade, one Jets draft pick has amassed a double-digit sack season — Muhammad Wilkerson (2013 and 2015), who relied on power more than speed. While Jenkins has recorded 15 sacks over the past two years, he is not considered a pure pass-rusher.

Elite rushers rarely get to free agency. When they do, they cost a bundle and, in case you haven’t noticed, the Jets are taking a thrifty approach. Douglas called it “financial discipline.” He said the Jets can splurge if an intriguing opportunity arises, but they won’t be doling out $17 million for Clowney, who reportedly has lowered his asking price. If he’s willing to drop it by another few million, then it would behoove the Jets to get involved. But I don’t see that happening.

Clowney is very good against the run, but he registered three sacks last season for the Seattle Seahawks — one of the reasons why his market is cold. The other reasons are his asking price and injury questions (core muscle and knee). In the current climate, with teams unable to administer physical exams because of coronavirus pandemic restrictions, it is hard to sign a player who has injury concerns.

“We’re going to do our due diligence on everybody that’s out there, especially at the edge-rushing position,” Douglas said in response to a specific question about Clowney. “I’m not going to get into the specifics or the details of the conversations we’ve had.”

The Jets have checked in with Clowney’s agent. Ngakoue’s agent, too. At this point, it can be classified as due diligence on both fronts.

Ngakoue wants to be rid of the Jacksonville Jaguars, but he’s restricted by the franchise tag. Any team that wants him would have to compensate the Jaguars (figure at least a first-round pick) and give the player a new contract. He could be a 20/25/29.5 player, meaning $20 million per year, 25 years old and 29.5 sacks over his past three seasons. He’ll probably wind up getting traded before the draft, as Frank Clark and Dee Ford were a year ago, but the double cost is too rich for the Jets’ blood.

Unless Douglas uncovers a hidden gem in the draft, it will be copy/paste next year, too.