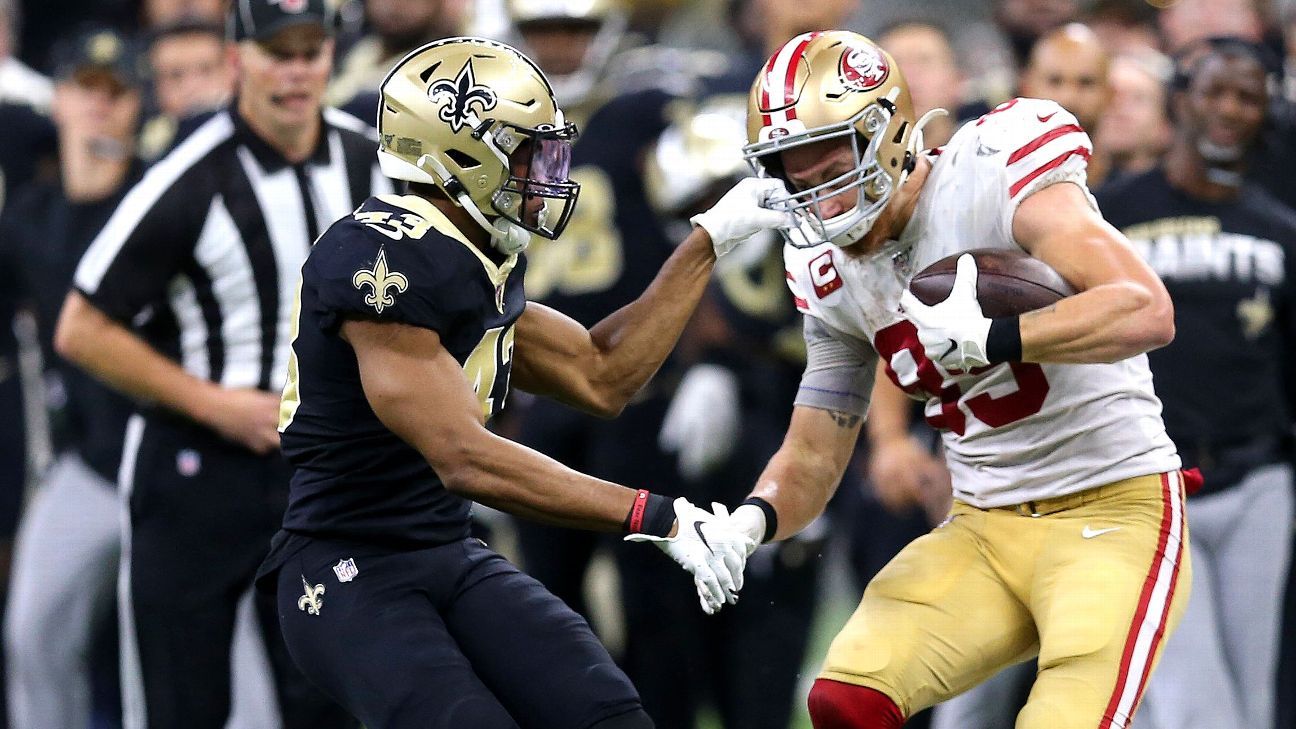 METAIRIE, La. — The defense has been the glue for the New Orleans Saints through much of this season, helping them win games by scores such as 12-10 and 13-6 while Teddy Bridgewater was filling in for Drew Brees at quarterback.

On Sunday, well, they came unglued.

The question now: Was this a blip on the radar? Or is there reason for concern after the Saints’ defense came up so small in the biggest game of the season to date?

“Look, we’ve got some guys nicked up. And I think at linebacker particularly, we’ve gotta get those guys back. At the same time, there were a number of guys that didn’t play well,” Saints coach Sean Payton said after the team was without starting linebackers A.J. Klein and Kiko Alonso. “So as the head coach, you look at the tape, you watch it, you’re disappointed with it in a tough game like that. And you gotta bounce back against the [Indianapolis Colts] here this Monday night.

The most disturbing thing about Sunday’s performance was the way New Orleans’ secondary was sliced and diced by San Francisco’s passing game. That wasn’t an isolated incident.

The Saints have allowed the fourth-most passing yards in the NFL the past four weeks (285.3 per game). That doesn’t include a whopping 13 flags for defensive pass interference or defensive holding in that stretch for a total of 124 yards.

Saints cornerback Eli Apple has had a particularly rough stretch the past two weeks. He was flagged for three pass interference penalties at Atlanta in Week 13. On Sunday, 49ers quarterback Jimmy Garoppolo picked on him early on his way to 349 passing yards and four touchdown passes. (Receiver Emmanuel Sanders also threw a 35-yard TD pass on a trick play.)

However, Apple had been playing well for most of the season before his recent hiccups. Plus, he was hardly the only culprit Sunday. Free safety Marcus Williams was beaten on the back end, and the Saints were gashed for 162 rushing yards on 24 carries (6.8 yards per carry).

“We’ve gotta, quite honestly, play better at the deep safety position. They beat our corners. They beat our safeties. And we didn’t have much of a pass rush to affect the passers,” Payton said. “So all those combinations aren’t very good. So I don’t think it’s just one thing.”

“We’ve set a standard, and I don’t think we lived up to that standard today,” said Saints defensive end Cameron Jordan, who had no sacks Sunday after a career-high four at Atlanta in Week 13.

The Saints ranked third in the NFL in rushing defense before Sunday, having allowed 88.6 rushing yards per game.

A lot of credit goes to the 49ers, as they have had one of the NFL’s most prolific offenses all season under the direction of coach Kyle Shanahan. They rank fourth in the league with 388.6 yards per game and second with 149.1 rushing yards per game.

San Francisco torched the Saints early with the play-action passing attack, exploiting the idea that New Orleans’ defense was committed to stopping the run.

Garoppolo attempted a career-high 14 play-action passes in the game, completing 11 for 191 yards and two TDs.

Shanahan also pulled out all the stops, including a trick-play TD pass from Sanders to running back Raheem Mostert and a fullback option toss that might have been taken right out of Payton’s playbook. Shanahan’s game plan was also filled with a heavy dose of misdirection plays.

“That’s something they’ve been doing well all year. Shanahan’s been doing it well his whole career,” Saints linebacker Craig Robertson said. “They just want to get your eyes moving in a lot of different directions, and we just gotta be better with our eyes.”

The Saints also failed to hold a 46-45 lead in the final seconds. San Francisco set up its winning field goal by completing a 39-yard pass to tight end George Kittle on fourth-and-2.

“We just gotta do our jobs,” said Williams, who was flagged for a face mask penalty against Kittle on that play. “That’s what it comes down to. Not what they do. It’s about what we do.

“We’ve been down before. We just gotta keep our heads up and continue to get better next week. Come out strong and come out ready to play.”

Park builds 2-shot lead in LPGA season opener
Which player had the best sneakers in the NBA during Week 13?
NHL Power Rankings: 1-31 poll, plus hidden All-Stars for every team
Australian Open FAQ: How fires could impact first major of 2020
Smoke stops Sharapova’s match at Kooyong