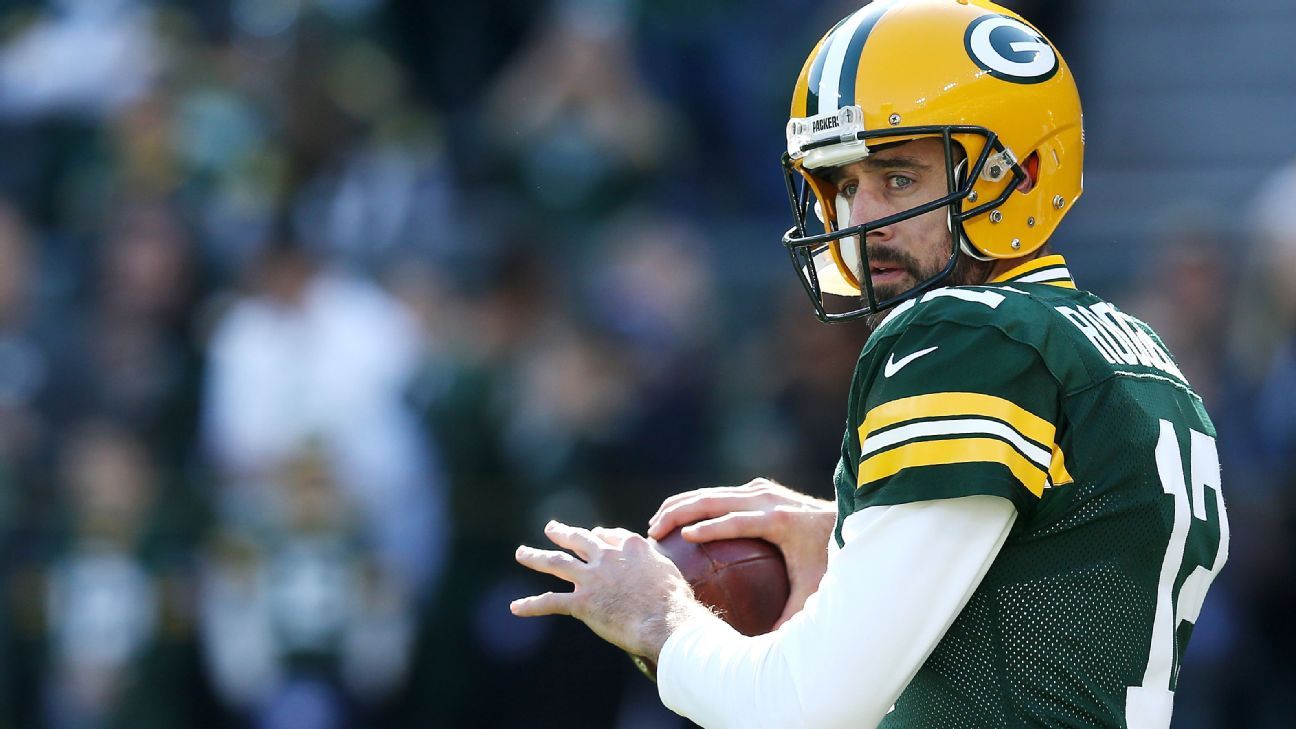 GREEN BAY, Wis. — Marquez Valdes-Scantling found it humorous when someone suggested Aaron Rodgers‘ most recent performance — his perfect performance in terms of passer rating and most other reasonable devices to measure quarterback play — should be considered something of a breakout.

“I mean, I wouldn’t say it was a breakout game for Aaron,” Valdes-Scantling, the Green Bay Packers‘ second-year receiver, said with a laugh. “He’s been doing it for a long time.”

He has, as Valdes-Scantling said, but not as much recently and not like he did in Sunday’s 42-24 destruction of the Oakland Raiders. And certainly not for a team coached by Matt LaFleur.

Those who have been around the Packers for years were reminded of Rodgers’ greatness and those new to the team were in awe of it.

His six-touchdown day (five passing and one rushing), his first perfect passer rating (158.3) in team history and his renewed enthusiasm seemingly with the help of LaFleur not only have the Packers at 6-1 but also have Rodgers back in the most valuable player conversation for the first time in at least three years.

Rodgers, the league MVP for the 2011 and 2014 seasons, hasn’t received a single MVP vote since the 2016 season. That year, he finished fifth with two of the 50 votes. Those are the only two votes he has received since he won with 31 of the 50 following the 2014 season.

If he was on the fringe of the MVP talk before Sunday, he’s smack in the middle of it now.

“Yeah, absolutely and he should’ve never been out of it,” said receiver Jake Kumerow, who caught one of Rodgers’ five touchdown passes against the Raiders.

Sunday’s game at Kansas City was to feature the old MVP against the new MVP until Patrick Mahomes‘ dislocated kneecap on Thursday took him out. But Rodgers didn’t wait until then to remind everyone that he should be in the conversation.

The show will stream live at 7:30 p.m. ET each Sunday during the 2019 season and will be available on demand each week until late Wednesday night. Watch on ESPN+

His game Sunday also showed just how far he has come in LaFleur’s offense. Rodgers, at the start of the season, preached patience with the new offense.

Through six games, Rodgers ranked 16th among all quarterbacks in touchdown passes with eight, 12th in yards, 25th in completion percentage and 20th in passer rating.

A week later, he’s fifth with 13 touchdowns, fifth in yards, 18th in completion percentage and sixth in passer rating. His max rating game against the Raiders raised his season number nearly 11 points, from 92.8 to 103.7 (which is slightly better than his career mark of 103.2, still the best in NFL history).

Rodgers’ pass protection has been a factor, too. He has been sacked only seven times in the past six games, a credit not only to the offensive line (led by the stellar play of right tackle Bryan Bulaga) but also to Rodgers’ willingness to get the ball out quickly. Against the Raiders, he faced pressure on just five of 34 dropbacks and went 15-of-18 passing with three touchdowns with given at least 2.5 seconds to throw.

The MVP race is just beginning. Mahomes could easily reenter if he returns as quickly as expected. A handful of other quarterbacks — Russell Wilson, Lamar Jackson, Deshaun Watson and, of course, Tom Brady — are in the early mix. There’s also a case to be made for Panthers running back Christian McCaffrey

LaFleur was hired in part to get Rodgers back to an MVP level. It was reminiscent of Mike McCarthy’s arrival in Green Bay in 2006. Brett Favre had thrown 29 interceptions the previous season. By 2007, Favre made a bid for a fourth MVP. Although it eventually went to Brady for leading the Patriots to an unbeaten regular season, Favre got the only MVP vote not cast for Brady and many consider that to be Favre’s best non-MVP season.

Questions about the Rodgers-LaFleur relationship have come up ever since the hiring in January. It came up for the umpteenth time again Monday, but it seemed just as relevant then — after they were seen yucking it up on the sideline during the Raiders game — as when they were seen having more confrontational exchanges in earlier games.

To LaFleur and Rodgers, it has all been part of the process to get to this point — where Rodgers again is an MVP contender.

“I think just like anything, any relationship it takes time to make sure that the communication is on point,” LaFleur said. “I like where we’re at right now, but we’ve got to continue to work each and every day just like any other relationship.”