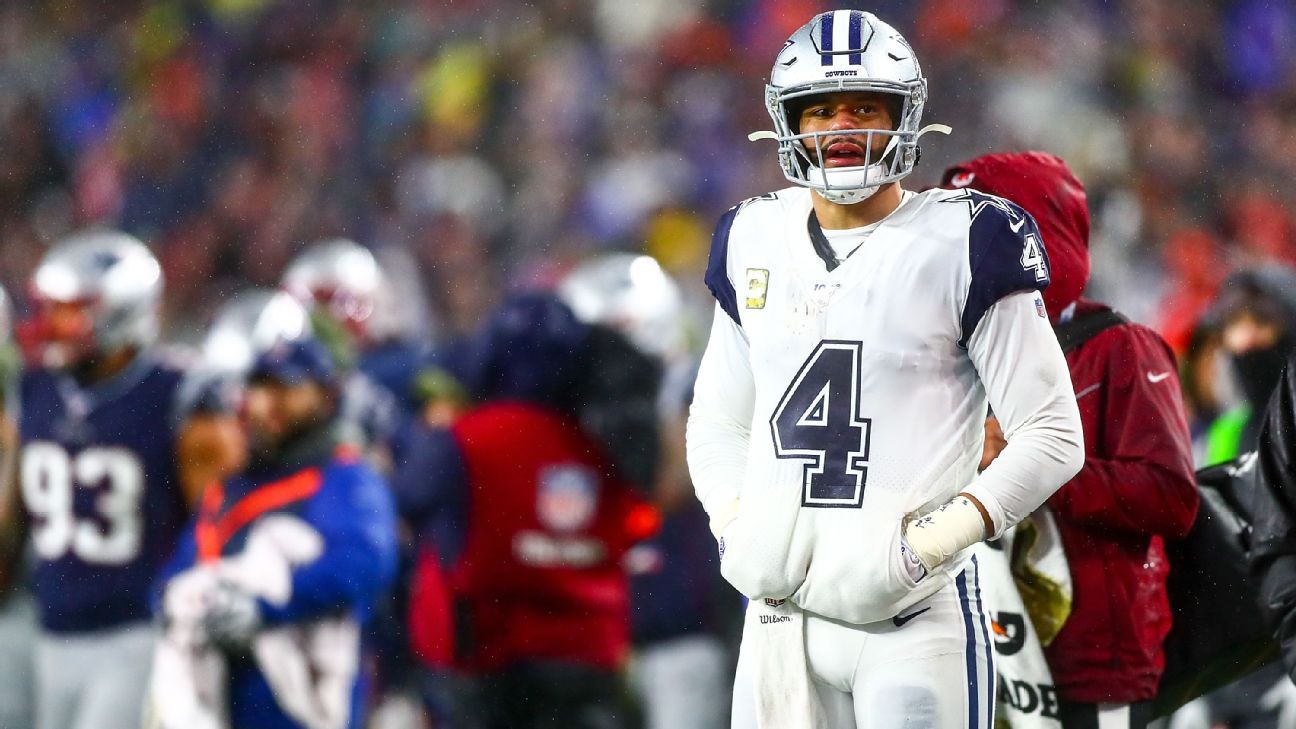 The 2020 Pro Bowl rosters are out, headlined by MVP favorite Lamar Jackson and 11 of his Baltimore Ravens teammates. The Ravens’ 12 selections were by far the most in the league, with the New Orleans Saints (seven) and Kansas City Chiefs (six) next in line. The Miami Dolphins and New York Giants were the only two teams who didn’t have a player make the cut.

Who wasn’t named in the initial roster release but should have been? And what else was surprising about the teams? We asked our NFL experts to weigh in, with fantasy football writer Mike Clay picking five snubs and the rest of our panel answering two questions, including looking ahead to the 2021 game. Check out their responses below.

The 2020 Pro Bowl will be played at Camping World Stadium in Orlando, Florida, on Sunday, Jan. 26. The game begins at 3 p.m. ET, and you can watch it live on ESPN, ESPN Deportes, ABC, Disney XD and on the ESPN app.

1. Dak Prescott, QB, Dallas Cowboys. Prescott is easily the biggest snub. The 26-year-old has dealt with a league-high 25 drops this season, but he still ranks third among quarterbacks in completions, second in passing yards, fifth in total touchdowns and fifth in yards per pass attempt. He’s also at or near the top of every advanced efficiency metric, including Total QBR, in which he sits third (73.3) behind only Lamar Jackson and Patrick Mahomes.

2. Eric Kendricks, LB, Minnesota Vikings. Minnesota’s defense is enjoying yet another outstanding season under Mike Zimmer, but arguably its most impactful player missed the cut. Kendricks is 15th in the league in tackles and has made noise as both a pass-rusher (his nine pass rush wins are 13th-most among off-ball linebackers) and in coverage (his 12 passes defensed leads the position). Kendricks has also racked up a pair of forced fumbles and 4.5 tackles for loss while playing 97% of Minnesota’s defensive snaps.

3. Justin Simmons, S, Denver Broncos. Simmons has enjoyed a breakout season in his first year under Vic Fangio. The 26-year-old free safety has been an absolute menace in coverage, topping all safeties in passes defensed (14), while also intercepting four passes. Simmons, who has 84 tackles, has been incredibly durable, seeing the field on all 884 of Denver’s defensive snaps. The 2016 third-round pick might not be Orlando-bound, but that won’t stop him from being one of the league’s most-coveted free agents this offseason.

4. Julian Edelman, WR, New England Patriots. Edelman being underrated in fantasy football is an annual tradition that seems to have crossed over to Pro Bowl voting. The highly reliable 33-year-old sits fourth among wide receivers in snaps, third in pass routes, second in targets and third in receptions. He’s 13th in receiving yards and has caught six touchdowns despite seeing only seven end zone targets. He’s not as flashy as some big-name receivers, but Edelman should be Pro Bowl-bound in his most-productive NFL season.

5. A trio of New Orleans Saints. The Saints have seven Pro Bowlers (only the Ravens have more), but it was still shocking to not see standout right tackle Ryan Ramczyk, play-making safety Marcus Williams or star linebacker Demario Davis on the roster. Ramczyk is one of the game’s best run-blocking tackles, Williams has four interceptions and sits second among safeties with 13 passes defensed, and Davis has done it all, sitting second among off-ball linebackers in pass rush wins (17) and passes defensed (11), while also racking up 3.0 sacks and 98 tackles (9.5 for a loss).

What surprised you most about the rosters?

Matt Bowen, NFL analyst: Demario Davis not making the cut for the NFC roster. The Saints linebacker has 77 tackles and three sacks this season, but he’s also one of the league’s top coverage linebackers. With 10 pass breakups and one interception, Davis is an impact player in Dennis Allen’s defense — and the film tells me he is deserving of a spot in the Pro Bowl.

Jeremy Fowler, national NFL writer: Kirk Cousins is one of the league’s most efficient quarterbacks, ranking second in the NFC in passer rating and completion percentage. He should have been in over Aaron Rodgers, whose numbers are inferior in several areas.

Eric Karabell, fantasy football writer: Not sure what else Cowboys quarterback Dak Prescott needs to do, but he’s having a better statistical season with flashier numbers than Aaron Rodgers and Drew Brees, who both made the team in the NFC. Voting shouldn’t be about your career or team’s current record.

Jason Reid, The Undefeated, senior writer: Not picking Prescott. Really? I get that the Cowboys have their issues, but Prescott isn’t the problem. He’s having a fabulous season and should be on this roster. It’s as simple as that.

Aaron Schatz, editor of Football Outsiders: TWELVE Baltimore players. That’s a lot of players from one team, even if it’s a team as good as the 12-2 Ravens. It does help when you get to bring along the long snapper.

Kevin Seifert, national NFL writer: At the very least, I thought the word was out that that Aaron Rodgers was having a season that was at best efficient but in no way accolade-worthy. I was wrong, and am reminded how reputation-based the Pro Bowl balloting system is. Rodgers’ QBR ranks No. 17 in the NFL for a reason.

Seth Walder, sports analytics writer: The volume of undeserved reputational selections, such as Tyreek Hill, Jarvis Landry, Travis Frederick, Frank Clark, Geno Atkins, Darius Slay and Jalen Ramsey. But no picks stands out more than Aaron Rodgers, who has had middling production this season despite playing behind the league’s best pass-blocking offensive line, making the NFC team over Prescott and Kirk Cousins.

Field Yates, NFL analyst: That Buccaneers outside linebacker Shaquil Barrett made it, and it was well-deserved. The surprise traces back to this offseason, as Barrett signed a one-year deal worth up to $5 million. He’s now the NFL’s leader in sacks (16.5) and a Pro Bowler. What a tremendous job by Barrett and outstanding signing by general manager Jason Licht.

Pick one player who didn’t make this Pro Bowl roster but will make it for the 2020 season.

Bowen: Jaire Alexander, CB, Green Bay Packers. The second-year pro has the coverage traits — and competitive playing style — to develop into a top-level cornerback. And the ball skills are there for Alexander to produce Pro Bowl numbers in 2020.

Clay: Kyler Murray, QB, Arizona Cardinals. Murray has hit the expected bumps along the road during his rookie campaign, but the No. 1 overall pick is in the middle of one of the best seasons ever for a first-year quarterback. Murray has had a lot on his shoulders, sitting sixth among all quarterbacks in drop backs and third in carries. Already a standout in fantasy circles, Murray’s play only figures to improve in what has the makings of a breakout 2020 campaign.

Fowler: Kenny Golladay, WR, Detroit Lions. He hit 1,000 yards and 10 touchdowns despite Matthew Stafford missing half the season. If Stafford suits up for a full 16 games in 2020, Golladay will put up numbers Pro Bowl voters can’t ignore.

Karabell: Austin Ekeler, RB, Los Angeles Chargers. Call me crazy but Ekeler, who might end up the No. 2 running back for fantasy PPR scoring this season, can do this again, especially if free-agent back Melvin Gordon lands elsewhere. Do it again and he’s a deserving Pro Bowler.

Reid: Terry McLaurin, WR, Washington Redskins. The unheralded third-round pick emerged as Washington’s best player on offense. He has 51 receptions for 833 yards and seven touchdowns, and he has an incredibly bright future.

Schatz: Darren Waller, TE, Oakland Raiders. He leads all NFL tight ends in value according to Football Outsiders DYAR. Perhaps he’ll get more attention next year when he’s in Las Vegas instead of Oakland.

Seifert: Dak Prescott, QB, Dallas Cowboys. When this season is over, most people will recognize the huge jump he took in 2019. There is every reason to think his improvement is based on experience, not some kind of unlikely-to-repeat set of factors, and that means it will carry over into 2020.

Yates: Justin Simmons, S, Denver Broncos. The Broncos playmaking safety is an all-over-the-field safety with freaky athletic skills. He should have been selected after a career-high four interceptions. He’s a blue chip player.