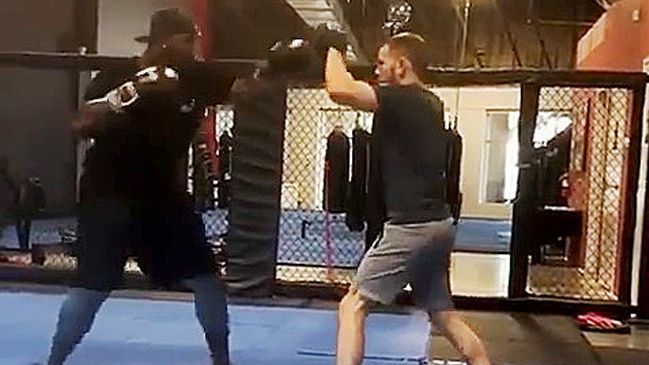 CHARLOTTE, N.C. – Ryan Hoover is 5-foot-7, 145 pounds and 45 years old. He has no formal background in football and only watched the game on a casual basis until 10 years ago. He doesn’t look like a guy who is instrumental in developing the skills of a Pro Bowl defensive lineman eight inches taller and more than twice his weight.

Carolina Panthers defensive end Kawann Short credits Hoover, a martial arts expert, with getting him ready for training camp and improving his hand-eye coordination in ways that will help him get to the quarterback more efficiently.

Other teammates swear by Hoover as well.

“He understands we’re not training to be fighters, but takes the pieces out of what they do and how it applies to what we do,” Pro Bowl tight end Greg Olsen said. “He’s really good.”

A chance email from a mom

Hoover came to help the Panthers in a roundabout way.

In 2011, he received an email from a mom looking for a self-defense course for her daughter before she left for college. Her name didn’t resonate outside of the fact she’d taken a couple of his classes, so he didn’t think twice about it.

Then one morning, after another session with the young woman, Hoover had one of those a-ha moments. He realized the mom was Stephanie Rivera, the wife of Panthers coach Ron Rivera.

“I was, ‘Oh, my God! How did I not make that connection?’” Hoover recalled.

Everything you need for a successful fantasy football season. Check it out!

A few weeks later, Stephanie asked Hoover if her husband could watch a session. And Ron Rivera observed many of the concepts that went into martial arts and wrestling are compatible to moves used in football, which led to Hoover being hired to work with players.

“Just simple hand movements, the way he turned his body, really clicked in my mind,” Rivera said. “It’s all about keeping a center line on his edge, always know where [your opponent] is.”

Hoover’s help with the Panthers isn’t as formal as it was a few years ago, when he came to Bank of America Stadium and taught players on the 53-man roster during the week and those on the practice squad on Saturdays. When league rules changed prohibiting teams from employing outside entities in-season, Hoover began to work with players who hire him on an individual basis.

“Especially when you watch Kawann use his body movement to create momentum and then he counters, when you see him with that little head move and then he comes back,” Rivera said as he recalled one of Short’s moves that led to a sack in a preseason game against Buffalo.

The move Rivera mentioned is one the 6-foot-3, 315-pound linemen has used throughout his career, but one that has improved with Hoover’s help.

“It was a swim move where we tap the hands of the lineman down quick and make a quick movement to get to the side,” Short said.

The move is the same one Hoover would use to keep an opponent off him in martial arts.

“Hand speed,” Hoover said. “When you’re trying to get off that line, O-line guys, they’re trying to get inside hand position. From the amount of time you’ve got to get from point A to point B, point B being the quarterback, the O-line has the advantage. They just have to stall you a little bit.

“If they get that inside hand position, it’s hard to break with the amount of time you have. So having good hand speed, being able to fight those hands before they get inside, is super important. That is probably where you see some of the most improvement.”

It works on the other side of the ball for offensive linemen trying to gain an advantage. Moton’s work with Hoover helped him record a stellar rookie season.

“I only worked with him a couple of times, but that guy is a stud,” Hoover said.

For defensive backs such as Bradberry, it helps them fight to prevent separation on one-on-one matchups. For receivers like Olsen, it’s about creating that separation.

Olsen in particular impressed Hoover with his work ethic as he spent the past two offseasons improving his upper body strength while rehabbing a foot injury.

“I would have to pretend for me to rest in between to give him a break,” Hoover said of Olsen. “That guy would work and work until he passed out. He has a work ethic unlike anything I’ve experienced.

“I’ve worked with athletes from across the spectrum, and that dude was unreal.”

Hoover typically texts Rivera once during the week before games to wish him good luck and once afterward. Occasionally, he’ll offer feedback.

“I don’t watch film the way those guys do, but I’m watching games with a different kind of eye than I ever have before.”

Players seldom visit Hoover during the season for training because, as Short said, “It gets you real sore.”

“It’s a different workout,” said Short, working to get back on top of his game after collecting three sacks in 2018 following a three-year average of 8.1. “You’re using different muscles and cores. You breathe different. It’s just different.”

The common thread from all of Hoover’s football clients is they must put their egos aside.

“It would be easy for these guys to be like, ‘What’s this 5-7, 145-pound guy that knows nothing about football going to teach me?’” Hoover said. “Most of the guys will come and say, ‘What do we need to work on? … I’m here to learn from you.’

“These guys are at the highest level. For them to come in and let that ego go and learn is a pretty big deal.”