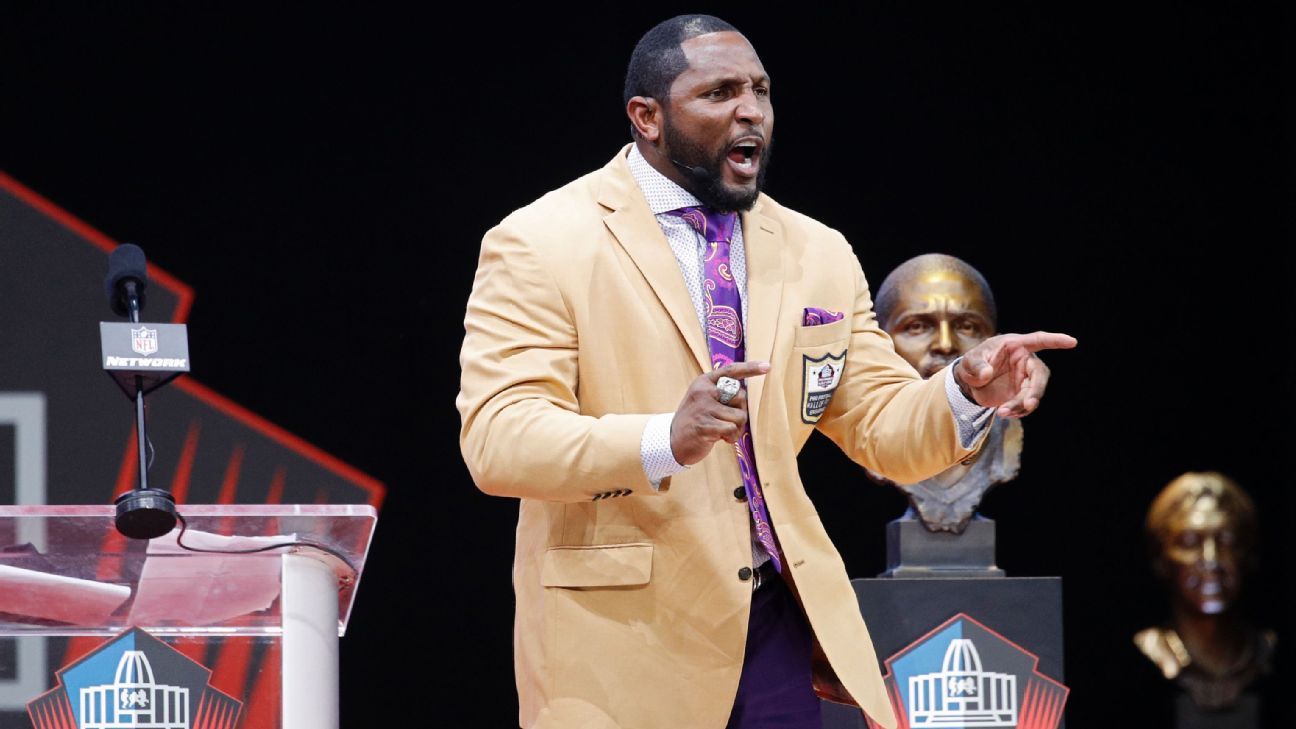 In an unprecedented move, Lewis used a wireless mic and became the first person in Pro Football Hall of Fame history to roam the stage, giving a passionate, 33-minute, 17-second speech that called on everyone to take a leadership role and make the country better.

“We need people that are willing to step up and take action,” Lewis said while looking at his fellow Hall of Fame players. “We can go from being legends to building a legacy bigger than football, bigger than sports.”

Wearing a purple tie and purple pants, the usually verbose Lewis flailed his arms while gripping a black towel in a wide-ranging speech that was the longest of the night but fell three minutes short of Brett Favre’s record.

In front of an enshrinement-ceremony-record crowd of 22,205, he talked about overcoming a triceps injury in his final season after the team doctor told him no one had ever come back from it. He brought up his suspicions about how the lights went out in the Superdome during the Ravens’ Super Bowl against the 49ers. He even called up fellow Ravens Hall of Fame player Jonathan Ogden from the crowd, and they performed Lewis’ signature pregame dance on the stage together.

Lewis briefly touched upon his ordeal in 1999, when he pleaded guilty to a misdemeanor obstruction of justice charge in a double murder case in Atlanta.

“[The years of] 1999 to 2001 may have been some of the darkest moments of my life,” Lewis said. “But I’ll tell you something. When God says, ‘Can you hear me?’ He sent you a family to make sure you’re OK while you’re going through what you’re going through.”

One of the most emotional moments of the night came when Dawkins revealed that he suffered from depression during his rookie season in the NFL. The nine-time Pro Bowl safety used the greatest moment of his career to speak out on mental health issues.

“I wasn’t just suffering through suicidal thoughts. I was actually planning the way I would kill myself so my wife would get the money,” Dawkins said while holding back tears. “What that pain did for me, it increased my faith exponentially. I have grown leaps and bounds because of the things I’ve gone through. When I say I went through, that means I came [out] on the other side of it. So for those [who] are going through it right now, you too have hope. There is something on [the] other side of this.”

Urlacher wanted to clear up the misconception that he came from privilege. He recounted pushing a lawnmower at age 12 and working in the oil fields in Lovington, New Mexico, as well as the lumber yard in Albuquerque.

When talking about his football career, the five-time All-Pro linebacker put his legacy in perspective.

“The most coveted position in pro football for a defensive player is to play middle linebacker for the Chicago Bears,” Urlacher said. “Just think about it, the history of this position is unmatched by any team: Bill George, Dick Butkus, Mike Singletary and now — I can barely say it — me.”

Moss rubbed the face and top of his bust, then delivered a sermon worthy of any church or synagogue.

“When I came into the NFL, I had no sense of direction,” Moss said. “All I wanted to do was play football. Not for one day did I not think God was with me.”

Moss, now an NFL analyst for ESPN, was a four-time All-Pro and member of the NFL All-Decade Team of the 2000s who played for five franchises. He said he didn’t regret one day with any of those clubs.

He paid tribute to his family, to the fans of his five teams and to his roots in West Virginia. He promised he would return to his hometown of Rand, West Virginia, on Sunday to show off his gold jacket.

“To my gold jacket brothers, I vow I will wear it proudly,” Moss said.

Kramer, a six-time All-NFL guard for the Packers, had the longest wait of any member in the class. He reached the Hall in his 45th year of eligibility.

His speech included numerous stories about Vince Lombardi and the advice the legendary coach imparted.

“After the game is over, the stadium lights are out and you’re back in the quiet of your room with the championship ring on your dresser, the only thing left is lead a life of quality and excellence,” the 82-year-old Kramer said. “You can if you will.”

The ceremony opened with Brazile, a seven-time Pro Bowl linebacker for the Houston Oilers. He drew laughs with his story about stealing his father’s electrical tape to put No. 51 on his T-shirt so he could emulate Butkus.

In ending his speech, Brazile said, “When the Hall of Fame knocked on my door, all of my dreams came true. After all these years, I am home.”