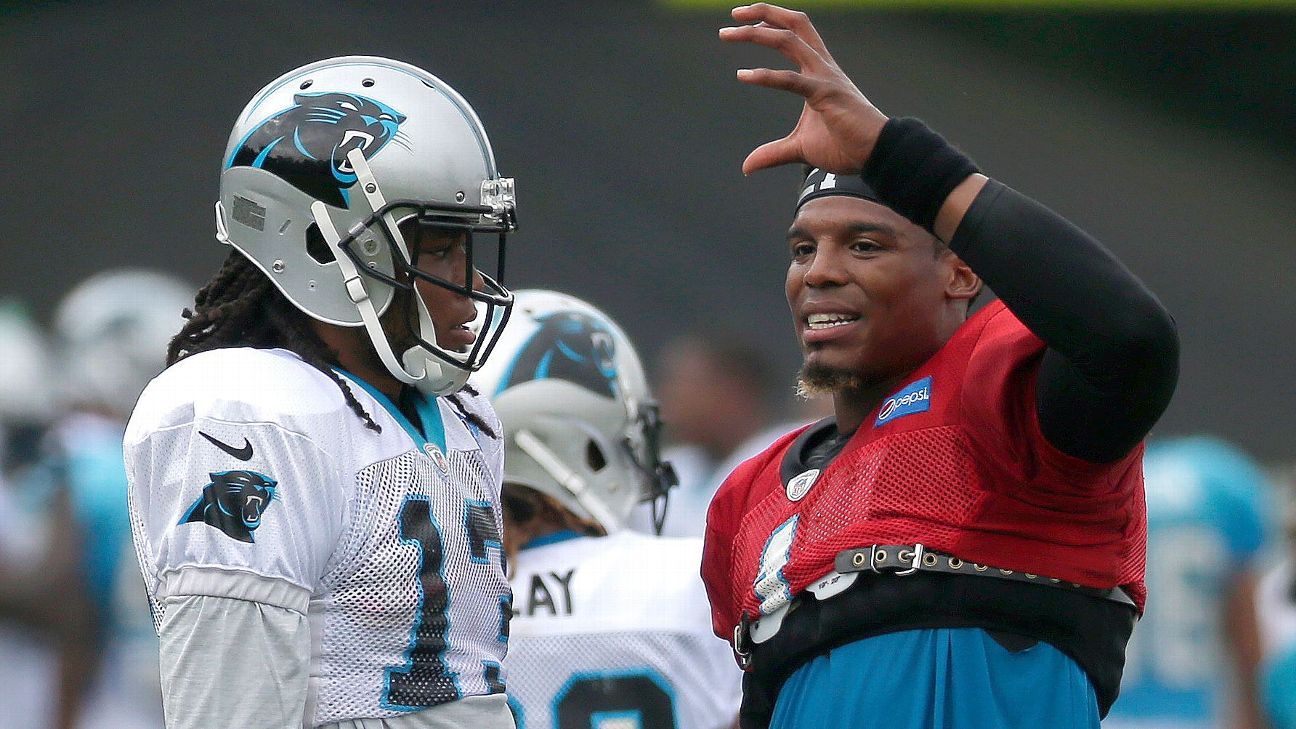 SPARTANBURG, S.C. — Buffalo Bills wide receiver Kelvin Benjamin is right. He would have benefited from having Aaron Rodgers, Eli Manning or Ben Roethlisberger as his quarterback during his first three and a half NFL seasons instead of Carolina Panthers quarterback Cam Newton.

You can throw Tom Brady into the mix, as well.

Any wide receiver would benefit from beginning his career with future Hall of Famers, Super Bowl-winning quarterbacks and, in the case of Rodgers and Manning (since Benjamin brought them up) — Super Bowl MVPs.

Benjamin, traded to Buffalo midway through last season, also would have benefited from their accuracy.

However, Benjamin was wrong in his interview with The Athletic to throw Newton and the Panthers under the bus for his production and not being allowed to grieve after his mother’s death just before last year’s training camp.

In case you missed it, Benjamin, who will face his former team in Thursday night’s preseason opener in Buffalo (7 p.m. ET), said: “It was a bad fit from the get-go. If you would’ve put me with any other quarterback, let’s be real, you know what I’m saying? Any other accurate quarterback like Rodgers or Eli Manning or Big Ben — anybody! — quarterbacks with knowledge, that know how to place a ball and give you a better chance to catch the ball. It just felt like I wasn’t in that position.”

Later, Benjamin tweeted: “I’m just crazy then !!! I was the one who buried my mom and skip the grievance process to get back and help that team …. let’s be real it was all fake … and to be honest i was salty Who wouldn’t be …. I just ben holding it all in. And now I’m free. Hate me or love me.”

Let’s start with the grieving process. Benjamin obviously was hurting last year when he arrived at Wofford College for camp. He wrote on social media he was in a “dark place.”

Benjamin also wrote it was a blessing to be at camp with his teammates and the coaches as he dealt with his mother’s death.

“Been around my bros! It crazy how I feed off [their] Energy. Love mom keep watching over me,” Benjamin tweeted.

The Panthers went out of their way to protect Benjamin from having to do interviews until the week before the opener, when the former Florida State star said he was dedicating the 2017 season to his mother. The staff insisted Benjamin needed time to grieve and gave it to him.

Newton was supportive as well.

“He’s playing with a purpose, and that’s all you can ask,” Newton said at the time. “I think we are going to get the best Benji. I feel this is going to be his best year.”

Now for Benjamin’s on-the-field performance. The most glaring stat is the Panthers were 21-3 without Benjamin the past four seasons. They were 18-21-1 with him.

They were 15-1 in 2015 when Benjamin missed the season with a torn ACL suffered in training camp.

Benjamin also had issues with drops. His 11 during his rookie season tied for the second most in the NFL in 2014. His drop rate of 13.1 was the third-highest percentage that year, according to Pro Football Focus.

Now Benjamin had a superb rookie season. His 73 catches for 1,008 yards and nine touchdowns earned him the second-best rookie rating behind Odell Beckham Jr. of the New York Giants.

That didn’t stop Newton from throwing to his 6-foot-5 receiver, who often made spectacular catches. In the three seasons Benjamin was active, he was targeted 164 more times than any other Carolina receiver, according to ESPN Stats & Information.

Benjamin also had gained weight at times, an issue that coach Ron Rivera brought up numerous times over the past three years. The receiver made excuses, saying he didn’t have to be at a certain offseason weight for voluntary workouts even though players understood the sessions were mandatory, as far as Rivera was concerned.

There also were times in games when Benjamin was lazy in using his size to create separation on routes. Twice in a 2016 game against the Chargers, Benjamin made no real effort to chase down a defender after an interception of a pass that was intended for him.

Benjamin later admitted he learned, “Just make sure you finish.”

Newton never threw Benjamin under the bus for any of this.

Nobody defended Benjamin more the past four years than Newton. It was obvious by his body language and words after the trade to Buffalo halfway through last season that Newton was at the very least emotional about the decision made to put more speed onto the field.

“An unbelievable teammate,” Newton said at the time. “He comes to work each and every day. He may not be a talkative person all the time, but I guarantee when you want people in the foxhole, Kelvin Benjamin is a person you want.”

Newton stood up for Benjamin again after a 22-10 loss to Minnesota during the 2016 season in which Benjamin went without a catch.

Newton took the same approach after Benjamin blasted him, posting a story on an Instagram on Saturday night where he said, “Hey, I ain’t going to go back and forth with him. I’m just going to work.”

That caption read, “ALL LOVE ON THIS SIDE.”

But early during Sunday’s practice, Newton made an on-the-field comment that could have been directed at Benjamin.

Panthers coach Ron Rivera says he doesn’t want to address Kelvin Benjamin’s comments because he is no longer with the team.

Panthers tight end Greg Olsen agreed. In defending his quarterback against what Benjamin said, he called Newton the best thing to happen to his career. He couldn’t give one example of how Newton would have been a detriment to Benjamin’s career.

“He was the MVP, wasn’t he?” Olsen said of Newton. “Just in general, you play with an MVP quarterback. There’s like four or five of them in the league, right? Obviously, you know how I feel and how we feel about Cam, which I think right now is all that matters. … People have opinions. That’s just the world of today.”

Olsen called it “weird” that Benjamin lashed out at Newton. Many teammates felt the same way.

Newton and Benjamin appeared to be best buds. Benjamin dressed up as an elf in 2014 to help “Santa Cam” deliver gifts to kids in Charlotte. They always were laughing and joking with each other in the locker room and on the field.

Newton affectionately referred to his big receiver as “Benji.”

But Benjamin wasn’t joking in his interview with The Athletic. One could argue he also threw Buffalo general manager Brandon Beane under the bus when he said, “I should’ve never went to Carolina. Truly, I just think Carolina was bad for me.”

Beane was the assistant general manager under Dave Gettleman when the Panthers used the 28th overall pick on Benjamin in 2014. He obviously felt Carolina was the right place for Benjamin.

Perhaps Benjamin just felt during this interview that he needed attention. Ironically, the most attention he ever got was as a rookie, and that was because the iconic Newton was his quarterback, who arguably was the best thing for his career.

Yes, Benjamin might have benefited from playing with another quarterback.

But to throw Newton under the bus now is wrong.

Who should be next for Dan Hooker and Paul Felder?
Thiem trails Mager in rain-delayed Rio quarterfinal
Which college football prospects rose up the new ESPN Jr. 300 rankings?
Kentucky Derby winning jockey York dies at 86
Murray suffers new setback ahead of Miami Open