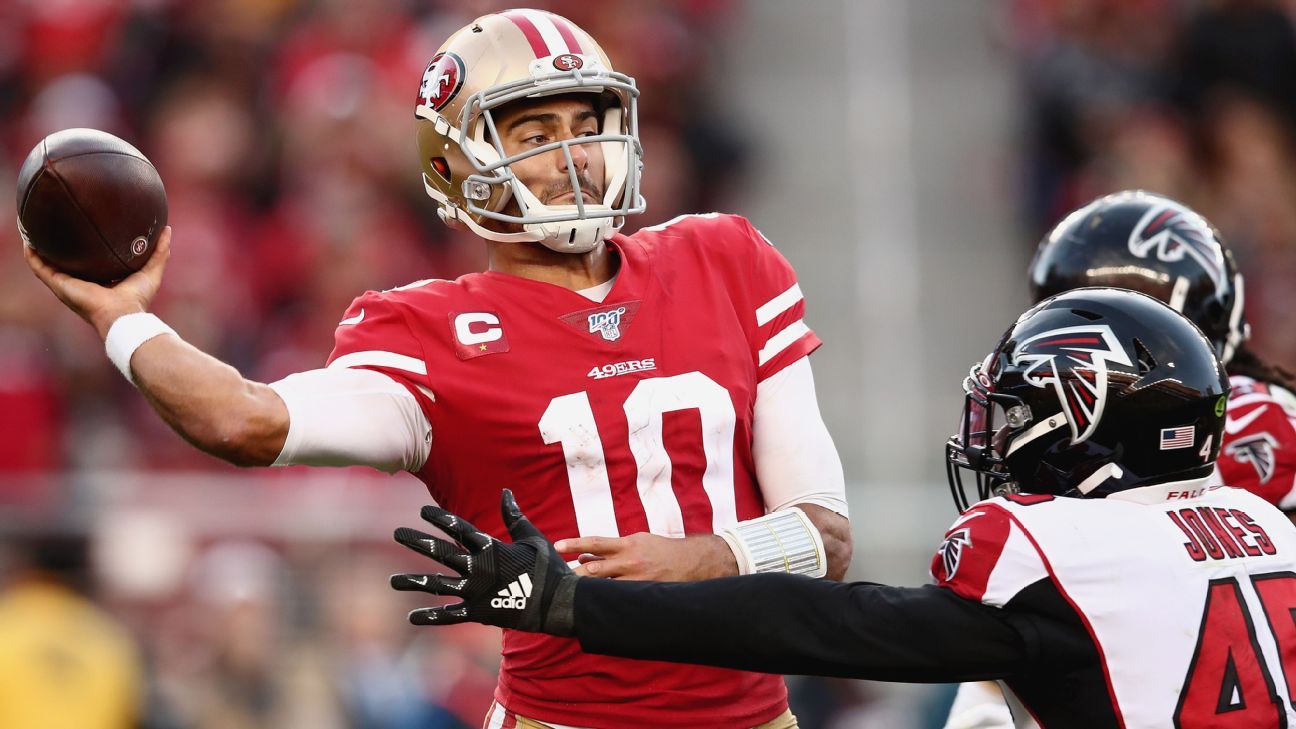 SANTA CLARA, Calif. — After a slow start in his return from a torn ACL, San Francisco 49ers quarterback Jimmy Garoppolo‘s numbers have skyrocketed. Garoppolo’s passing yards, touchdowns and passer rating have shot up since Week 8.

But it’s not those growing numbers that have the Niners and coach Kyle Shanahan excited about Garoppolo’s progress. It’s the one that has dwindled.

Indeed, the 49ers have asked more and more of Garoppolo. Injuries on defense have required the offense to produce more. As opponents have loaded up to stop the run, Garoppolo has been charged with carrying more of the offensive freight.

Since acquiring Garoppolo in 2017, the 49ers have always believed he could shoulder that load. It’s why they gave him a five-year, $137.5 million contract that made him the game’s highest-paid player at the time despite only seven NFL starts.

But Garoppolo’s lack of starting experience (10 starts prior to this season) also meant the Niners had to come to terms with potential growing pains. In Garoppolo’s case, those pains frequently meant a bad decision that often led to an interception or, more recently, the bad habit of not securing the ball when under pressure and coughing up a costly fumble.

Through the first 11 weeks, Garoppolo had 14 turnovers (10 interceptions and four lost fumbles), which was tied for fifth most in the NFL. In the past four weeks, he has had one fumble and one interception. That includes a three-game stretch against teams with .800-or-better winning percentages in which Garoppolo tossed seven touchdowns, averaged 10.09 yards per attempt and had a passer rating of 129.7, all of which ranked third in the NFL in that span.

Aside from a disappointing performance against Atlanta, the 49ers’ offense has surged recently, moving to sixth in the league in yards per game and second in offensive points scored per game.

“It’s just going through the game plan knowing where your outs are, knowing where your hot [reads are], things like that, and just take what the defense gives you,” Garoppolo said. “I don’t think it’s doing anything special or anyone making a crazy play. It’s just playing within the offense and just following your rules.”

Beyond his comfort in the offense, which has come as Garoppolo has been able to string together nearly a full season’s worth of starts for the first time, he also acknowledges his increased comfort has come as his knee has regained strength. Garoppolo said he no longer worries about the knee and points out that it takes “a little while” to get back to full strength, both physically and mentally, after such an injury.

It also has helped that Garoppolo and Shanahan maintain an open and honest — sometimes brutally so — relationship that allows them to pull no punches when talking football. Some players might not take too kindly to that but Garoppolo isn’t one of them, one of the reasons Shanahan has maintained faith in him.

“It helps a ton, honestly,” Garoppolo said. “The communication aspect between coaches and players or whatever the line is, the more honest you are, the more upfront you are about the situation, the easier it is to fix it or move on, whatever the situation calls for. Whenever a coach is talking to you honestly like that and just being straightforward, you really appreciate it.”

After a rough preseason, there were understandable questions about whether turnovers would become a recurring issue. They were, at least for a while, but the more Garoppolo settles in, the more things around him slow down, allowing him to process things quicker and make better decisions.

“Confidence obviously comes with that, being able to do it week in and week out,” Garoppolo said. “As a quarterback, that’s what you want to do. You want to be there for the team week after week.”

With a postseason run near, the stage will only get bigger for Garoppolo. His remaining skeptics, of which there seem to be many, insist they will give him credit if he can continue his recent surge under the game’s brightest lights.

Garoppolo’s growth to this point is an encouraging sign that he’ll be up to the task. And if more mistakes lie ahead? Shanahan believes Garoppolo won’t flinch.

“The more you’re out there and the more situations you go through, good or bad, it’s how are you going to react to them,” Shanahan said. “What are you going to learn from them? Some people, the more they are out there, the more nervous they get and they go into a shell and just get worse. Jimmy, no matter whether a good thing or a bad thing happens to him, I feel it’s made him better each week. He learns from it, he doesn’t overanalyze it and freak out about it. He just learns from it, files it in the bank and then goes to the next week and tries to keep stacking them up.”