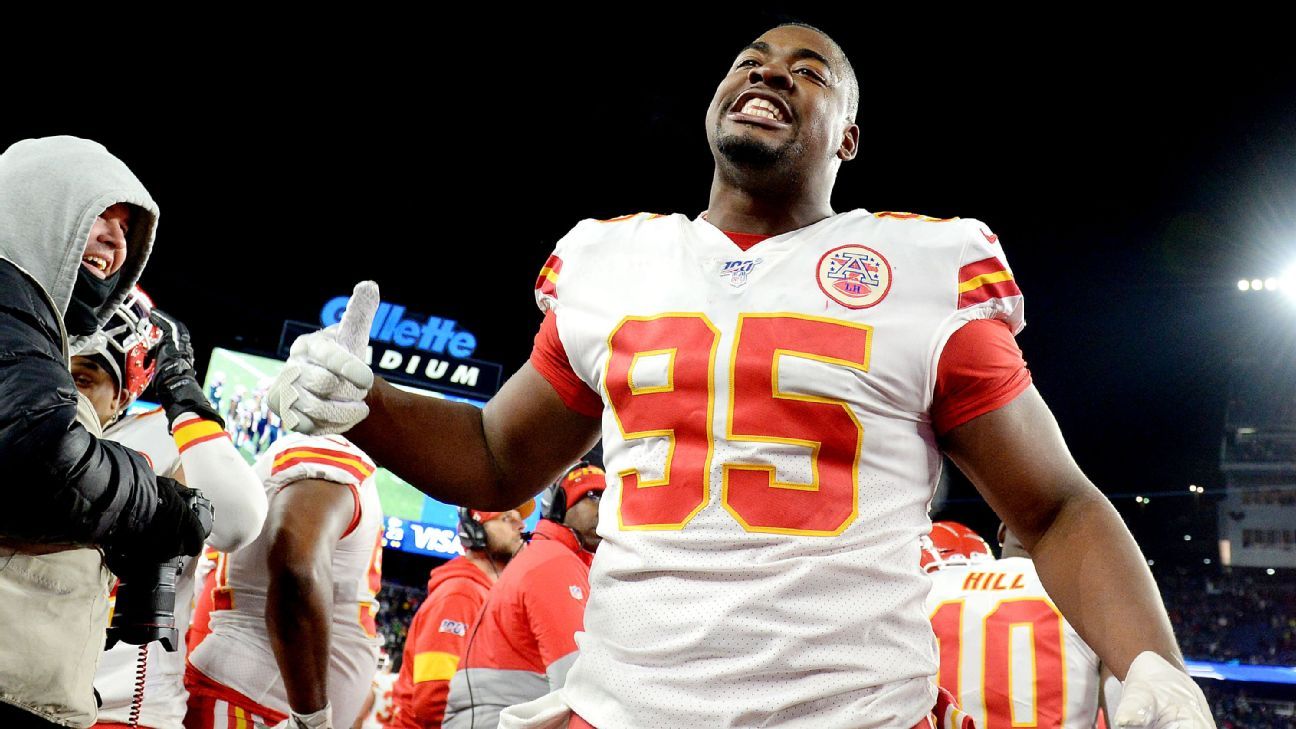 KANSAS CITY, Mo. — The Kansas City Chiefs overhauled their coaching staff and roster in the offseason with the hopes that a reconstructed defense could take them further than last season’s AFC Championship Game.

It took some time, but that defense looks as if it has arrived. The Chiefs won their third straight game with their defense on Sunday, this time against their opponent in last season’s AFC title game, the New England Patriots. The Chiefs’ current three-game winning streak has them positioned as the AFC’s No. 3 seed, just one game back from a playoff bye.

“Not one step in that fourth quarter that we really felt like we were going to lose this game,” said cornerback Bashaud Breeland following the 23-16 win at New England. Breeland had a first-half interception that led to a touchdown and batted away a pass in the end zone on fourth down in the final two minutes against the Patriots.

“The defense the whole time, we were confident enough knowing that we were going to continue to do what we were doing. Tom Brady, he’s the GOAT. You’re not just going to shut him out a whole entire game. So for us to do what we did against him, it was a glorious moment.

“This is the type of game that we wanted to come play to really test where we’re at. We’ve had our ups and downs throughout the season. We felt like this was the point that really can help us get over the hump and propel us to where we want to be.”

The Chiefs’ defense has certainly been on a roll. Against the Chargers in Week 11, they had four interceptions, including two in the fourth quarter. In Week 13, they held the Raiders scoreless until the fourth quarter and without a touchdown until the game’s final minute.

Then Sunday, the Chiefs held the Patriots in the fourth quarter to a field goal that was set up by a Travis Kelce fumble. It’s not a vintage Patriots’ offense, but they still rank in the league’s top-10 in points per game.

“The defense, I think, is one of the big stories of the season,” Chiefs chairman Clark Hunt said. “At the beginning of the year, we knew it was going to take a fair amount of the season for that group to really [come together]. We had a new coaching staff, we had new players, we had a new scheme. We struggled a little bit early with that but over the last four or five weeks I think the defense has really stepped up. They’ve been a big factor in the last three victories.”

That’s quite a change from last year, when many games came down to the last possession and were decided by the team who had the ball last. The Chiefs lost twice to the Patriots, including in overtime of the AFC Championship Game, on the game’s last play. The Chiefs lost to the Rams on Monday Night Football in a game that they scored 51 points. They allowed 14 and 15 fourth-quarter points in losses to the Seahawks and Chargers, respectively.

Over the last month, they’ve allowed 42 points in three games. They beat the Chargers by scoring 24 and the Patriots by scoring 23.

But it hasn’t been this way all season. As recently as Week 10 against the Titans, things looked shaky. The Chiefs allowed two touchdown drives in the fourth quarter as the Titans rallied to win.

New coordinator Steve Spagnuolo’s 4-3 base defense seems to be taking hold, though. Nine of the 18 Chiefs who played on defense against the Patriots weren’t with the team last season, including end Frank Clark and safety Tyrann Mathieu. They rank 14th in points allowed per game this season (21.6) after ranking 24th last season (26.3). The Chiefs have allowed an average of 14 points over the last three games.

Clark said the defense earlier in the season wouldn’t have played the kind of game it did in New England.

“Not at all,” he said. “It comes with the trials and tribulations. … You’re seeing the results of all the stuff we had to go through back then, the losing, the failure, us not being able to close out a game.

“The only way to get that back to normal is by winning and winning when it’s on the defense.”

&• How players are prepping for work stoppage
&• 2020 draft nuggets for all 32 teams
&• Why Patriots will — and won’t — repeat
&• A blip or reason to worry about Saints?
&• Chiefs finally have defense they wanted

Clark especially is playing well after a slow start. He has five sacks in his past five games, including one against the Patriots.

Mathieu, the other big-money offseason addition, played well early in the season but has made game-changing plays of late. He had interceptions against both the Chargers and Raiders.

Chiefs coach Andy Reid won’t declare the Chiefs arrival on defense yet, but he’s enjoying the change and can’t deny the progress.

“I can tell you every week we’ve gotten better,” he said. “We had a little bit of a hiccup at Tennessee but other than that it’s been consistent progress forward.

“The players have bought in. They’re flying around making plays.”