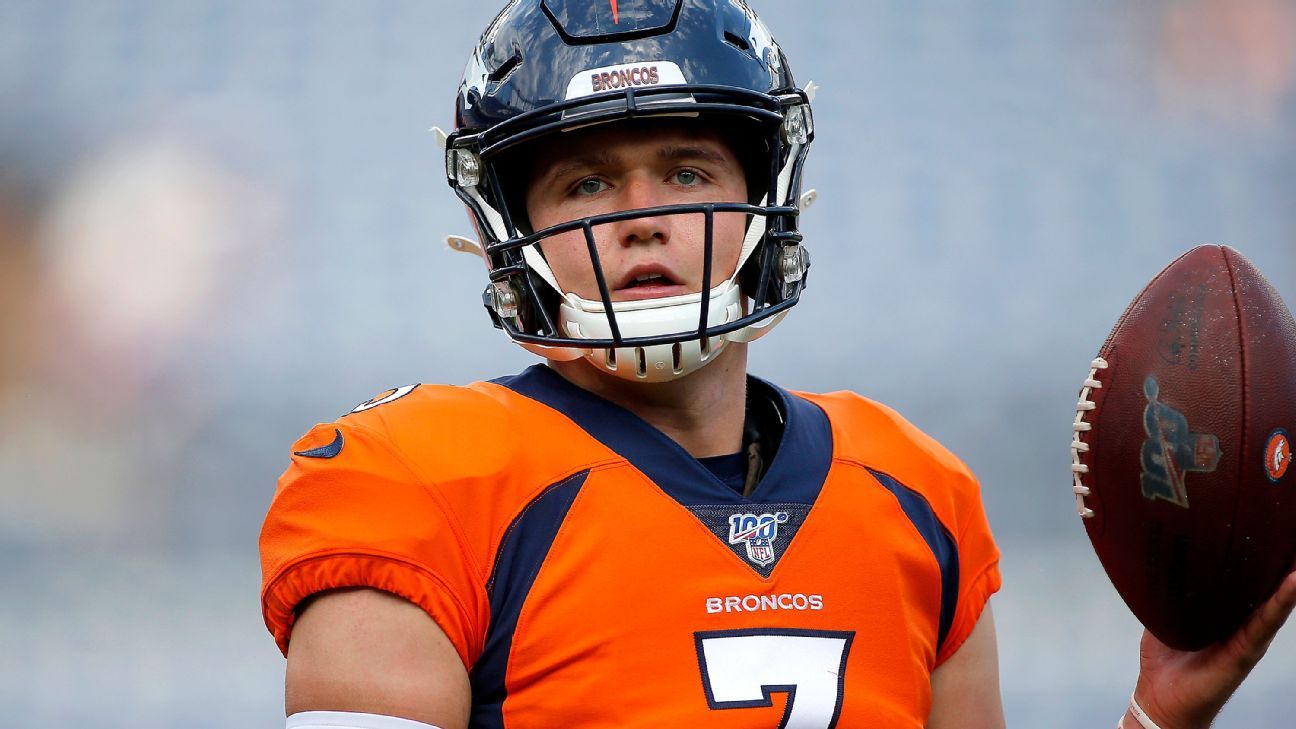 ENGLEWOOD, Colo. — Denver Broncos quarterback Drew Lock will have a group of 50 family members and friends in the stands amid a sea of red at Arrowhead Stadium as the rookie makes his third career NFL start in his hometown Sunday.

Lock graduated from Lee’s Summit High School, which sits roughly 15 miles from the Kansas City Chiefs‘ stadium, where Lock said he went to “too many (times) to count” before the Broncos had made him the 42nd pick of this past April’s draft.

“Drew’s just got to be able to handle that,” Broncos coach Vic Fangio said of Lock’s homecoming. :… He’s going to deal with it once a year, so he’s just got to do it.”

The Broncos have won Lock’s first two starts in the last two weeks — over the Los Angeles Chargers and the Houston Texans.

“I think we’ll all make a little too much of that,” Lock said Wednesday of his return. “It’s just another football game, I’ve got to prep like I did in the first two weeks. … You can turn the phone off, you can do whatever, but the people that know you, that you trust — your family, your close friends — they know not to blow you up about coming home, asking for tickets, ask you for this, ask you for that. They know you have something going on.”

The 24-year-old Lock, who said he was a “pretty passionate” Chiefs fan growing up, was asked if his friends would still be pulling for Chiefs quarterback Patrick Mahomes against his Broncos. Lock had to pause to remember that he only had finished his college career a year ago.

Lock was also asked if his best sports memories from high school came from football or basketball, for which he was also recruited and played at the AAU level.

“Since I still play football, I’m going to have to go with the basketball memories,” Lock said. “You can’t get those back. You miss it a little bit. I love the game of basketball.”

You know, we had an Applebee’s right across from our school — half-priced apps after 9. By the time you’re done playing your game, you and a couple of your buddies that stayed after waiting for you to come out of the locker room, you go over and do that. Get a little kiwi lemonade and go to town.”

All in all, Lock said he has tried to sequester himself away from the outside discussion about Sunday’s game or how his first two starts went. He said his mom is handling the ticket requests and he has tried to dive into the game plan.

The only other game Lock has played at Arrowhead Stadium was in 2015, when the Missouri freshman was 19-of-28 for 244 yards, a touchdown and an interception in a win over BYU.

“I try to stay in this building as much as possible,” Lock said. “… It’s going to be different. I hope when [friends and family] walk in there in a Broncos jersey, it has a 3 on it [and] that they’re going to cheer for the Broncos, because I would appreciate that a lot. It’s going to be loud enough as is, so if we can turn over 50 of the Chiefs fans that are in there …”