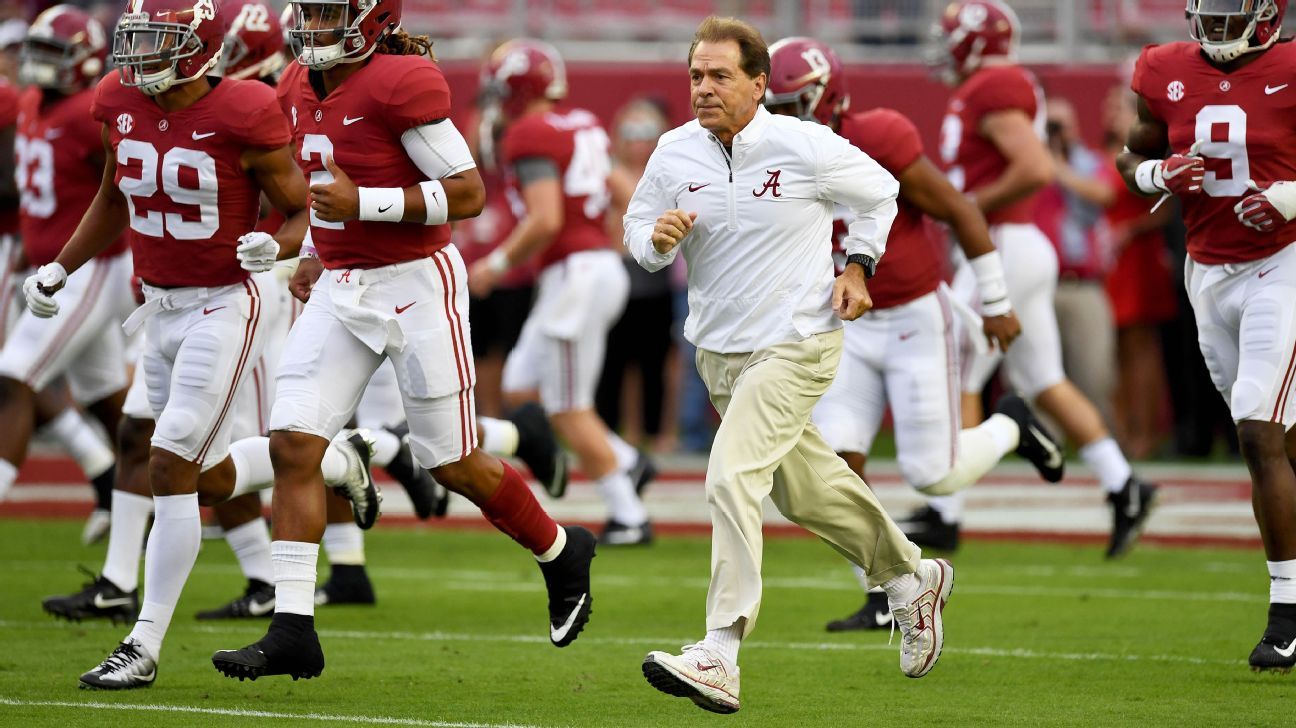 Building a better Bama
Nick Saban’s imprint is most apparent in the conference he has dominated. It’s not just that everyone in the SEC is chasing Alabama. In many cases, teams are trying to re-create the Tide.

Four of Saban’s former assistants are now SEC head coaches (Jimbo Fisher, Kirby Smart, Will Muschamp and Jeremy Pruitt), and nine of the conference’s 13 programs have coaches who once worked for him. One of the programs that doesn’t, Arkansas, hired a former Saban player-personnel staffer this offseason as one of its two recruiting coordinators.

As his apprentices hop on the SEC coaching carousel because of Bama’s success, Saban’s rivals have in turn lost their rides. When Mark Richt was shoved out the door at Georgia in 2015 after 15 seasons and a 145 — 51 record, Saban told reporters, “I don’t know what the world’s coming to in our profession.” But truth be told, Saban is precisely what has turned his profession upside down.

Average tenure of Power 5 coaches in the 11 years before Saban was hired at Alabama: 6.27 seasons

Average tenure of Power 5 coaches in the 11 years since: 3.75 seasons

Like Les Miles at LSU and so many coaches before him, Richt was fired because he wasn’t Saban. He never so much as sniffed a national title, let alone five in a decade, and after three losses to Alabama in his last three tries, Georgia seemed to think he never would.

Mimicking the Crimson Tide’s success doesn’t stop with poaching coaches. Over the course of the past decade, every SEC school has undergone or is undergoing a multimillion-dollar facilities upgrade, including LSU’s upcoming overhaul to its football operations building, originally constructed during Saban’s final year in Baton Rouge.

All this with the goal of replicating the inimitable, of building a program that stands apart.

Working harder
By rule, the NCAA restricts head coaches to hiring 10 assistants, five strength coaches and four graduate assistants. But it doesn’t say anything about other job titles.

Saban might not have been the first to identify the loophole, but he took the concept of an unregulated support staff and ran with it. Alabama now has more than 40 non-coaches listed on its staff directory, including 13 “analysts” and a cadre of athletic department staffers meant to amplify the program, including graphic designers and videographers.

Former offensive coordinator Lane Kiffin once joked that in his time at Alabama, he couldn’t learn everyone’s name. When Dabo Swinney went to Clemson, he made no bones about building out his staff. “Saban changed the game,” he said. And two years ago, when Tom Herman took over at Texas, he boasted of getting “an army together.”

The proliferation, though, has been starkest in recruiting, an art form based on instinct and eye that Saban has codified into a business based on science and manpower. He’s built a supplemental recruiting operation separate from coaching in which staffers focus exclusively on watching film and evaluating prospects against predefined characteristics for each position — a receiver’s height, an offensive lineman’s reach, a pass rusher’s flexibility. That operation is the muscle behind Alabama’s 10 straight top-three finishes in ESPN’s recruiting class rankings since 2008 and the inspiration for copycats nationwide.

“I don’t think 10 years ago there were personnel departments,” former Nebraska coach Mike Riley says. “I don’t know specifically when Nick started it like he did, but since that time it’s grown tremendously.”

Working smarter
It’s not just the number of coaches Saban has attracted; he’s also getting quality.

Former head coaches such as Kiffin, Kevin Steele and Steve Sarkisian have lined up for relative grunt work in Tuscaloosa. In March, Saban brought in former Tennessee coach Butch Jones. His role? “An intern,” Saban said, though Alabama lists Jones as an analyst. The Tide have also hired several former Power 5 coordinators in quality-control positions.

And control is exactly what Saban emphasizes. Take, for example, the “one voice” model he popularized. His freshmen — even an SEC offensive player of the year like QB Jalen Hurts — aren’t allowed to speak to reporters. That dates back to 1998, when Saban’s star receiver at Michigan State, Plaxico Burress, said beating Michigan would be “like taking candy from a baby.” Armed with bulletin-board material, Michigan hounded Burress and won 29-17. “Most of the stuff we do we learned from experience,” Saban says.

Or look at the ways in which player development and care have evolved under Saban. Those medical tents popping up on college and NFL sidelines? Alabama trainer Jeff Allen helped design the first one, which debuted on the Tide’s sideline in 2015. Saban also has players consult with handpicked mental conditioning specialists like Chenavis Evans who help them better understand their personality types, allowing coaches to challenge and communicate more efficiently.

Saban, going into his 12th season at Alabama, extended his contract in July in a deal that keeps him in Tuscaloosa through 2025. So no matter how much progress his rivals make, it looks as if they’ll have to work not only harder and smarter but longer too.