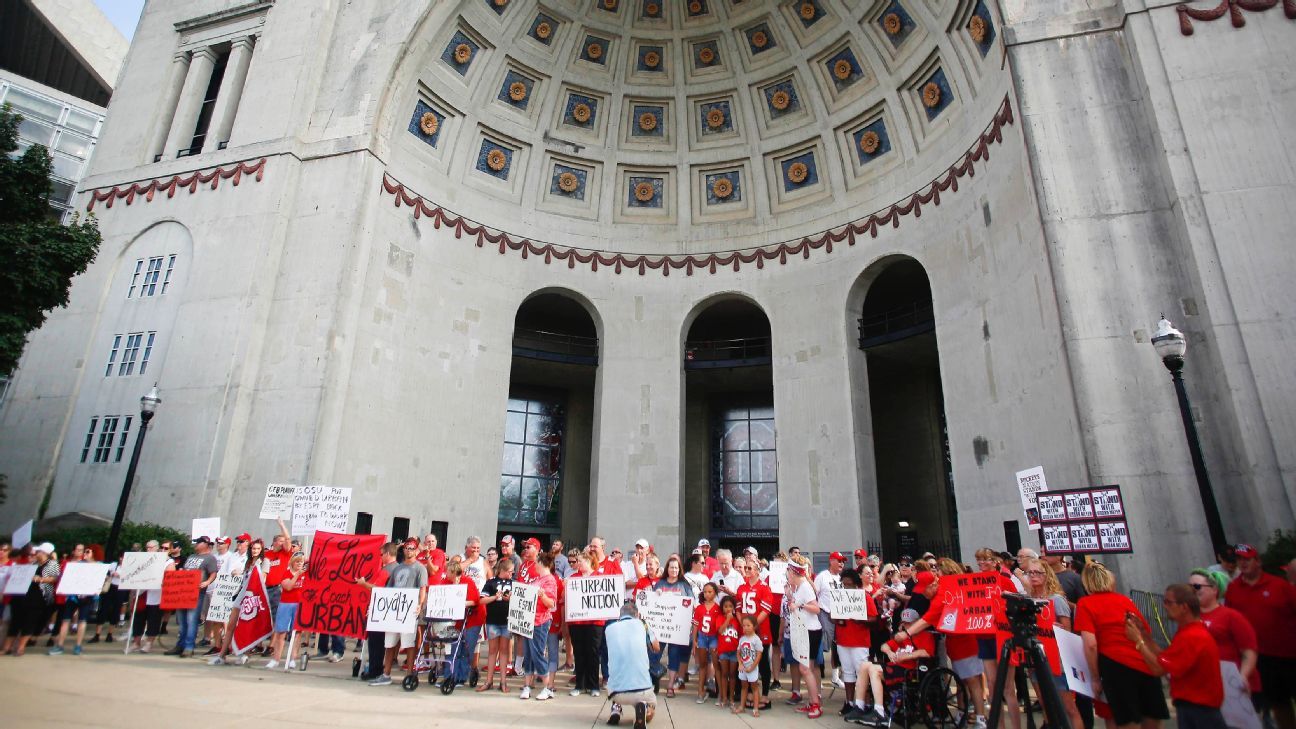 COLUMBUS, Ohio — More than 100 Buckeyes fans gathered at the gates of Ohio Stadium on Monday night in an effort to show support for suspended Ohio State coach Urban Meyer, who is currently embroiled in controversy related to domestic assault allegations against a former assistant coach.

The scarlet-and-gray crowd chanted “Urban Meyer” and sang the university fight song in a rally that lasted less than 20 minutes in the 90-degree evening heat.

Jeff Hamms — a fan from Myrtle Beach, South Carolina — sparked the event with a Facebook post this weekend. He drove to Columbus on Saturday because he felt Meyer was being treated unfairly. He said he hoped to draw a line between standing behind Meyer and sending a message about the domestic assault issues of an assistant coach that landed the head coach in hot water.

Ohio State placed Meyer on paid administrative leave last week after Courtney Smith, the ex-wife of former Buckeyes coach Zach Smith, told college football reporter Brett McMurphy that Meyer knew about a domestic abuse incident in 2015 and did not act. A week before Courtney Smith’s interview, Meyer told reporters that he was unaware of any issues the Smiths had in 2015 and “never had a conversation” about the alleged incident.

Meyer backtracked Friday in a written statement in which he said he followed proper protocol in reporting the 2015 incident. He apologized and said he was “not adequately prepared to discuss these sensitive personnel issues with the media” when he denied any knowledge of the 2015 incident. Meyer’s statement was released while Zach Smith was in the middle of an interview with ESPN. Smith told ESPN that Meyer pulled him out of a practice in October 2015 to ask about the incident.

Smith said he would be heartbroken if Meyer lost his job because of the way he has handled this situation. As of Monday night, nearly 30,000 people had signed an online petition to say they don’t want to see Meyer “wrongfully fired” from Ohio State.

In attendance at Monday’s rally was Stacy Elliott, father of former Ohio State running back Ezekiel Elliott. Stacy Elliott came to the event wearing a replica of his son’s Buckeyes jersey. Elliott said he participated because he loves Meyer and because he teaches respect for women.

Elliott’s son, now a running back for the Dallas Cowboys, was suspended without pay for the first six games of the 2017 NFL season after the league investigated allegations from Elliott’s ex-girlfriend that he was involved in “multiple instances of physical violence” against her.

Stacy Elliott said he understood why Ohio State has suspended Meyer as it conducts an investigation, but feels Meyer handled the issues with Smith properly.

“[Urban] handled it for what his job required him to do,” Elliott said. “He wasn’t the first person to know it happened. His boss knew before he knew.”

Several of the fans outside Ohio Stadium seemed to the think the buck ultimately stops with Gene Smith, Ohio State’s athletic director and Meyer’s boss, in this case.

Burbridge said he’s more loyal to the university than to Meyer, but he thinks the coach has had a positive impact on the community and believes that he does not ignore domestic abuse issues. He said Meyer should not have been misleading when talking to reporters in Chicago, but thinks the coach needed to just “learn what ‘no comment’ means.”

Mary Watts and Vicki Snow traveled to Columbus, along with other friends, from their homes about 50 miles south of campus. Both said they would be upset if Meyer was fired or suspended any longer than he already has been. Watts said she thought Meyer should be reinstated as coach and that Gene Smith should be the one answering questions.

“What are we investigating?” she said. “We have to investigate the whole thing.”

Watts and Snow said they didn’t think any less of Meyer because of the way he handled questions about the 2015 Smith incident. Snow said she believes Meyer has the best interest of the community in mind, and if he comes out with a “mea culpa” for what he said in Chicago that would be the most the coach should need to do.

“I support Urban Meyer,” Snow said. “I am against domestic violence. I don’t think those two things contradict each other.”