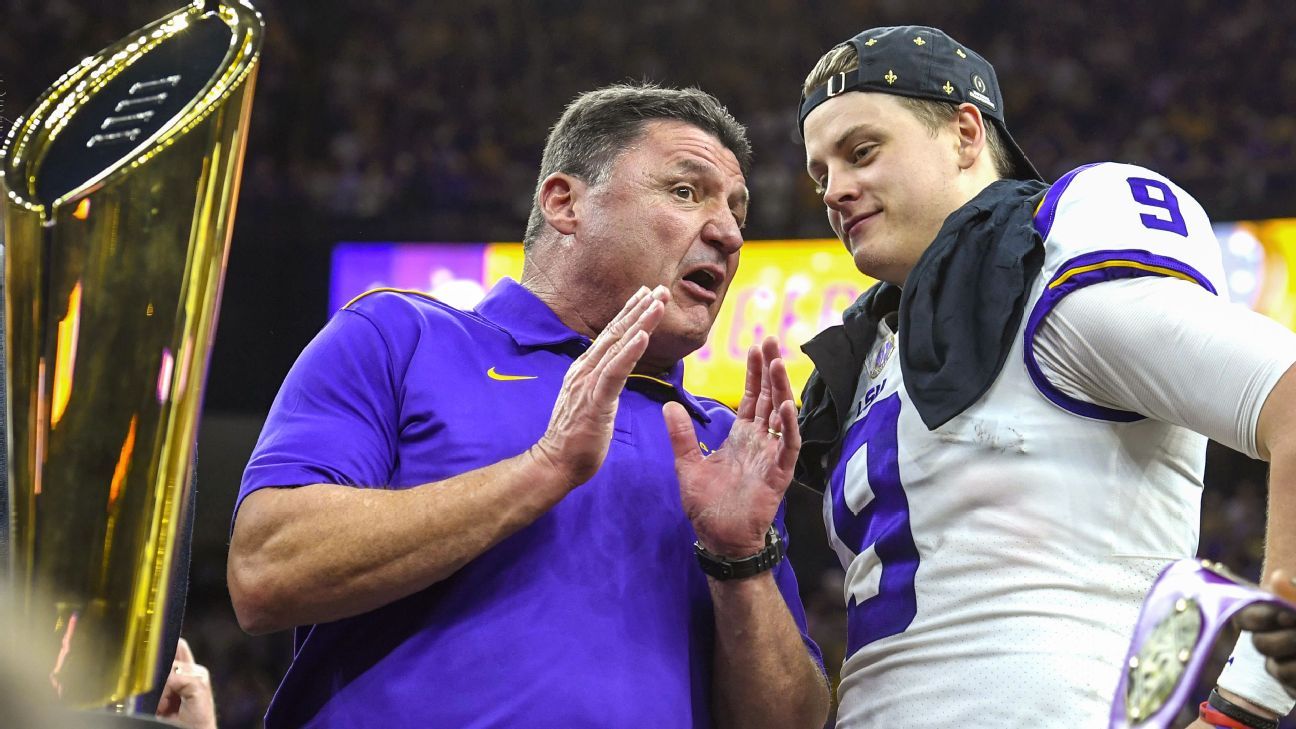 NEW ORLEANS — There was Joe Burrow, getting rid of the ball in this Mercedes-Benz Superdome on Monday night as quickly as Saints quarterback Drew Brees has done here on so many Sundays.

There was the LSU quarterback, scrambling for three first downs and a touchdown in a critical second-quarter rally when No. 1 LSU found itself trailing for the first time since Oct. 22 against Florida, three months and 33 quarters ago. And there was wide receiver Ja’Marr Chase, doing such a number on All-ACC corner A.J. Terrell, Clemson’s best defensive back, that Clemson moved Terrell off of him in the second half.

With its 42-25 victory over No. 3 Clemson, a team that had won its last 29 games over 741 days, LSU made its pitch to stand among the greatest teams in 150 years of college football. This LSU team that fought to the program’s fourth national championship played the game the way it has played all season — a brand of decidedly 21st-century football replete with a lot of big plays, a passing game as unstoppable as it is irresistible, and a quarterback who tortured Clemson with his arm and, when LSU really needed it, his feet.

But in this team’s performance are hints of the 1958 Tigers, the national champions who changed not only the way we view LSU, but how Tiger fans view their own as well.

Joe Brady, the young co-offensive coordinator, came to Baton Rouge this season from the Saints with the playbook that remade this offense. His work LSU erupted against Clemson for 628 yards. After falling behind 17-7, LSU went on a 35-8 run that quieted the orange side of the dome.

“What this offense has done, I’m amazed. I really am,” co-offensive coordinator Steve Ensminger said. “We changed the whole durn thing in one year, you know what I’m saying? We changed everything in one year. And these guys bought into it. They worked their ass off to get where they’re supposed to be, to get where they want to be, and they did it.”

Burrow finished this season with 60 touchdowns passes. It’s one thing to say that’s an FBS record. More to the point, in the last four seasons combined, LSU quarterbacks threw 59 touchdowns.

“You never imagine this,” said Ensminger, a Baton Rouge native who played quarterback for LSU in the late 1970s. “But it’s always your goal.”

The Tigers who excelled at the Mercedes-Benz Superdome on Monday, as they did 14 times before, changed how we see LSU on the field.

Ed Orgeron, the homegrown coach who focused on keeping Louisiana recruits home, transformed this program with a quarterback from Ohio. No longer is this program known for viewing the modern passing game with suspicion. Burrow and his coterie of receivers reached offensive heights never before seen in Baton Rouge — or, for that matter, anywhere else.

Viewed through a purple-and-gold lens, this team stands out because the history of LSU football is filled with passion more than dominance, pride more than championships.

“The Tigers often were underdogs, just like the state of Louisiana,” wrote John Ed Bradley, the author who played four seasons on the LSU offensive line in the late 1970s.

The history of LSU football before 1958 is sparing in its success. The 1908 team went 10-0; the highlight of the next 50 years was the fandom of Gov. Huey Long, who commandeered the LSU campus in general — and the Tigers’ football team in particular — as a campaign prop.

“LSU can’t have a losing team because that’ll mean I’m associated with a loser,” Long once told a friend, according to biographer Richard D. White Jr.

In White’s 2006 biography, he recounted how Long paraded up and down the sideline signaling plays he wanted run and barged into the locker room to give halftime speeches, once promising every player a job if the team came back and won (it did). He moved four players into the governor’s mansion, loading them up with steaks and milkshakes. Long ran off one coach, Russ Cohen, and his successor, Biff Jones, quit rather than allow Long into his halftime locker room.

Over the next two decades, LSU found little success, and Tiger Stadium bore little resemblance to the house of horrors that awaits visiting teams today. Then came the 1958 Tigers, who under the 34-year-old Dietzel laid the foundation of the program we know today. Those Tigers endeared themselves to the state, especially Billy Cannon, who won the Heisman Trophy in 1959. Cannon went to Istrouma High School, six miles from campus. In 1958, the fans began filling Tiger Stadium to the rim, and they have done so pretty much ever since, even as the stadium has grown half-again its size, from 67,720 to 102,321.

In the six decades after Cannon and his classmates graduated, LSU fans displayed their pride in the noise and heat and general hullabaloo that descended upon Tiger Stadium on autumn Saturday nights. The number of wins might have wavered, but the pride only rarely did, sustaining itself through the thin of most of the 20th century and the thick of the 21st.

McClendon, who from the early 1960s through the 1970s won more games (137) than any other coach in LSU history, chastised his players by saying, “You are letting down the whole state of Louisiana.” He meant it, and he might have been right.

Orgeron grew up in Larose, Louisiana, in the part of the state that is losing its battle against the incursion of the Gulf of Mexico. Orgeron’s first memory of LSU football is of hometown hero Ronnie Estay, a 215-pound defensive tackle. Estay anchored the defensive line that held Notre Dame to a cumulative 11 points in a home-and-home series in 1970-71. In a 28-8 defeat of the Fighting Irish in 1971, LSU made several goal-line stands with Estay right in the middle.

“It was the talk of the town for 10 years — or still,” Orgeron said. “And I remember [thinking] this: ‘Wow, if I could ever be a part of something like that …'”

Estay epitomized the undersized fighters signed by McClendon. Most recruits have to get bigger to play college football. Estay came to LSU and had to lose 15 pounds to get on the field.

That ability to punch above their weight both endeared the Tigers to their fans and explained why for so many years they never reached the top. LSU under McClendon went 2-14 against Bear Bryant (McClendon’s coach at Kentucky) and Alabama.

A generation later, LSU again measures its success against the standard set in Tuscaloosa, largely because of the coach who broke their hearts. As much as LSU fans celebrated the BCS championships that their Tigers won in 2003 and 2007, the dominance those titles represented was diminished by the shadow cast by Nick Saban.

The 2003 season, as memorable as it is, turned out to be only a rung in the ladder Saban climbed to his ultimate destination. He won one national championship at LSU. He has won five at Alabama, including the 2011 title that the Crimson Tide claimed by humiliating the Tigers 21-0 in their last visit to the Superdome.

On Monday night, back in the Dome, LSU gave a performance for the ages.

Orgeron said one other thing that needs no contemplation.

“We wouldn’t be here without Joe Burrow,” Orgeron said. “We know that.”

Source: AB’s agent terminating relationship
Kane reaches 1,000 points as Blackhawks cruise
Mark Wood’s grin says it all for a bowler loving life
Would the NHL standings change with a different points system?
Just like that, Conor McGregor is back in control