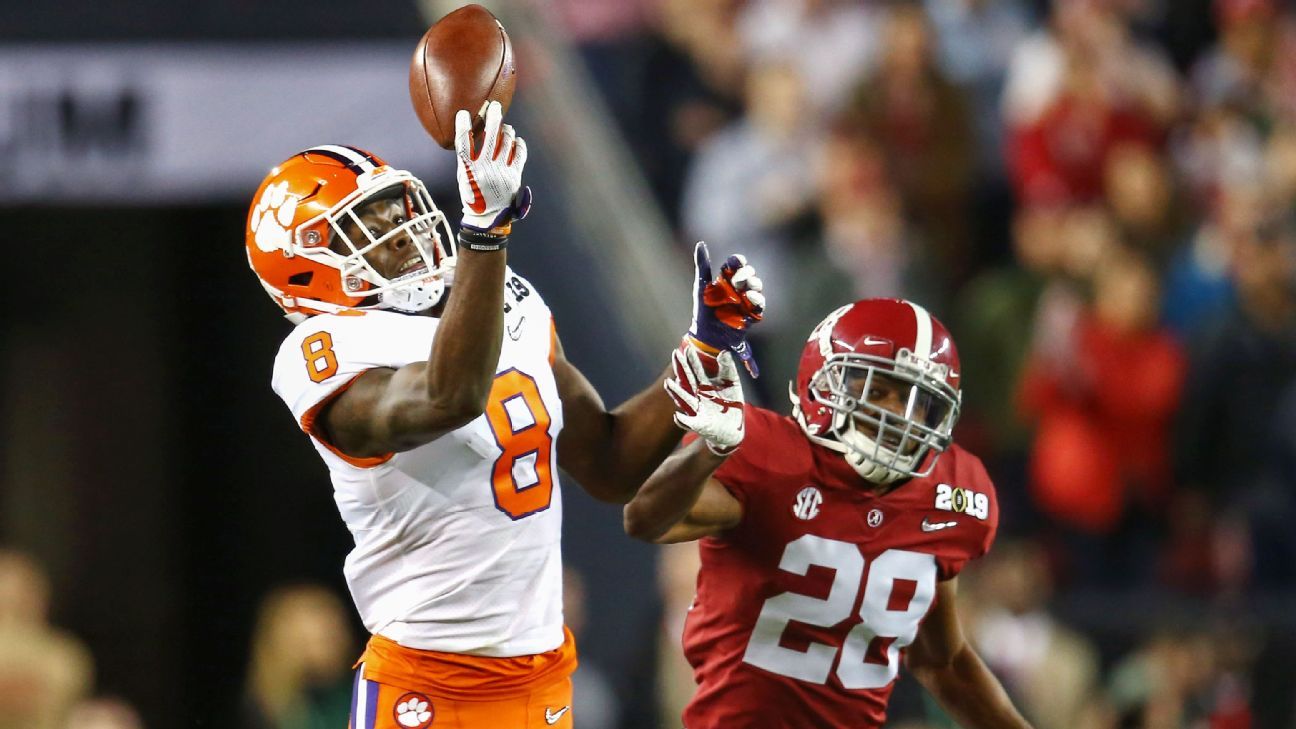 Justyn Ross was spent. That’s what he remembers about the catch that made him a household name, the one that proved to be the final dagger that slayed mighty Alabama.

The previous play was a little screen pass that gained just a yard, but it took its toll on the Clemson freshman receiver. He looked to the sideline and signaled for a break.

“Stay in, stay in,” was the response from receivers coach Jeff Scott.

Ross dragged himself to the line. Trevor Lawrence took the snap on third-and-9. Ross made a half-hearted move toward the middle of the field, then cut out and up. The ball was on him quickly. The throw was wide, the only spot where Ross had a chance — a minuscule one, but a chance — and the defender didn’t. Ross extended his right arm, and the ball found his hand.

Ross tapped a foot on the turf before falling out of bounds. The crowd erupted. The call from the broadcast booth: “Another circus catch for Ross.”

“Another” and “circus” were necessary modifiers, as this was actually Ross’s second one-handed reception of the national championship game. The play gained 17 yards, putting Ross’ season total at exactly 1,000, and set up Clemson for its final touchdown in a 44-16 win over the mighty Crimson Tide in January.

And none of it should’ve happened.

“I have to thank Coach Scott,” Ross said. “If it were up to me, I wouldn’t have been out there.”

But that’s the beauty of all of the truly great one-handed grabs, all the ones played on a loop on highlight reels, the ones we need slow-motion replay to truly appreciate the physics-defying athleticism they required. None of these catches should have happened. They’re crazy. They’re unscripted. They go against every bit of technique taught by coaches. They’re the frenetic, joyous, what-the-heck-did-we-just-see finish to a play that, up until that moment, had gone terribly wrong.

So, how do receivers manage to make these ridiculous catches? It’s art, it’s science and, if they’re being honest, it’s a lot of luck.

STEP 1: Learn from the best

The first legal forward pass in football took place in 1906, and through 113 years of catches that followed, none was quite like Odell Beckham’s one-handed stretch in the end zone in 2014.

To recap: Defenders were draped all over the Giants receiver. Beckham fell backward. The ball appeared out of reach. The rest was like a scene from “The Matrix.” Time stopped. Beckham reached out with one hand — his back arched, his legs prone — and made the grab.

Every catch that’s been made at any level of football since that moment is measured against Beckham’s.

Beckham hosts football camps for kids now, and every receiver tries to recreate that forever moment. Go to any practice — peewee to the NFL — and receivers will be contorting their bodies, hyperextending elbows and stretching their fingers to mimic that grab.

“That’s the measure we all take from,” said Oklahoma State receiver Tylan Wallace. “Everybody measures theirs off that one.”

STEP 2: Do not practice it (publicly)

Beckham made his catch, and every receivers coach in the country immediately realized their jobs just got harder.

The rule, for every receiver throughout history, is the same: Get two hands on the ball. But Beckham’s grab convinced them all that using two hands is fine, but a one-handed catch is what really gets people talking.

“It’s like wanting a Ferrari over a Camry,” said Ohio State’s K.J. Hill. “Those one-handed catches are cool and flashy and it gets your name out there. That Odell catch got him to be Odell.”

Scott sees it nearly every day at practice. Teach them about fundamentals all you want, but when there’s a chance to make the circus catch, they’re going to take it.

“Some guys in practice would rather drop the ball nine times and make one one-handed catch,” he said.

Five years after his grab, Beckham understands the weight of what he’s inspired, and he’d like to apologize to all those coaches who’ve paid the price.

“You’re supposed to catch the ball with two hands,” Beckham said. “So everyone is trying to catch it one hand. I hope I don’t take all the blame for that.”

OK, real talk. Practice ends. The coaches leave the field. Now’s the time when a receiver can crank up the Jugs machine and work on those highlight grabs.

Ross ends every practice with 10 balls on the Jugs machine — nine caught with perfect, two-handed form, then a single one-handed grab for good measure.

At Virginia Tech, receivers go through concentration drills in which they’ll work to get two hands on a ball with a foam pole swatting at their arms. That’s not a bad time to sneak in a few one-handed grabs for good measure.

Most one-handed catches are reactionary. The ball is on the receiver a little too soon, he sticks out a hand, and that’s it. But those reactions are built up over time and repetition and seeing the little details that turn a play from a film-room critique into a hype video for the ages.

“You see the different points of the ball — the different angles of it,” Hill said. “You’ve got to place your hand a certain way. You might catch it with your middle finger up, your index finger. You get a feel for it. So when you see the ball, when you see the tip of the nose of it, you know what angle to take for a one-handed catch. I think it’s just instinct and reaction, but you’ve got a feel for it so it’s something in your repertoire.”

STEP 4: Timing is everything

The dirty secret of a one-handed catch is that it’s usually the culmination of a bad play. The line allowed pressure, so the quarterback had to deliver the pass early. The receiver couldn’t get off the line, so he was a step slow in his route. The quarterback’s footwork was out of whack, so the ball floated just a bit, forcing his receiver to adjust at the last minute. If a pass can be made only one-handed, odds are somebody screwed up along the way.

Wallace was a freshman with one catch to his name when he made his spectacular grab against Pitt in 2017. He got jammed at the line and was slow getting downfield. His route was lackluster. Truth is, he said, he didn’t know what he was doing. The throw from QB Taylor Cornelius would’ve been on the money if Wallace had run his route precisely, but instead it was long. Wallace reached out, tipped the ball just a bit, then hauled it in.

Tylan Wallace stretches out with one hand and makes an impressive catch for a 39-yard Oklahoma State gain.

Luck isn’t a long-term strategy, Scott insists, but it’s tough for a coach to get upset in the aftermath of a highlight-reel catch.

In practice, Turner has a habit of dropping his one-handed attempts, but his touchdown against Virginia saved the Hokies’ season, and while he knew the fundamentals weren’t exactly textbook, by the time he reached the sideline, he wasn’t too worried about a formal critique from the coaching staff.

Virginia answers VT with a one-handed touchdown of its own as Joe Reed reels in a marvelous 29-yard touchdown from Bryce Perkins.

“It’s one of those catches where you know, if you don’t catch it, you’re about to get spazzed on,” Turner said. “So when I got to the sideline, I looked to my coach and was like, ‘Yeah, you saw it.’ He said, ‘You know if you’d dropped it what would’ve happened right?”

Hill’s grab against Minnesota is a study in contortion. His quarterback, Dwayne Haskins, was forced to throw early, and Hill wasn’t expecting the ball to be on him so quickly. He twisted his body, reached his arm back, and found the football.

“I just stuck my hand out there,” Hill said, “and it stuck.”

After Hill reached the end zone, he made sure every fan in the stadium knew just how well it stuck, feigning surprise that the ball was still in his hand. Clutching the ball by its tip, Hill pantomimed a shake, as if he couldn’t release it from his hand. Heck, a glove covered in super glue seemed about as reasonable as the catch he’d just made.

“As a kid, we did that from watching movies and playing Madden and it just came to me,” Hill said. “It was a reaction. It was always in my mind to do it, and it was perfect timing, I guess.”

The vital ingredient in any great feat of athleticism is to assure all the slack-jawed gawkers that this was actually pretty easy.

“I’ve made plenty of those catches in practice,” Hill said.

Ross has a highlight reel of one-handed grabs dating back to high school, and he shrugs off his first of two championship-game grabs as a mistake on his part, a slight one-handed bobble that he corralled.

In fact, for all the folks who come up to Ross and want to talk about those catches — he’s kind of over it.

“I’ve kind of wanted it to die down a little bit, but it’s never going to die down,” he said.

Everything about a great one-handed catch is a paradox. It flies in the face of fundamentals, but it’s the catch everyone gets excited to see. It’s mostly reaction and luck, but it requires skill and precision. It’s the play every receiver wants in his highlight package. But he never wants it to define his game.

“You don’t win games based on a one-handed catch,” Scott insisted. “It might wow the crowd or get guys excited, but ultimately you win games by making a lot of plays with a higher percentage chance, with two hands.”

And maybe that’s why we love the one-handed spectacle so much. It’s a little wrong. It’s not supposed to happen. It defies logic and coaching. It’s so bad, it’s good.