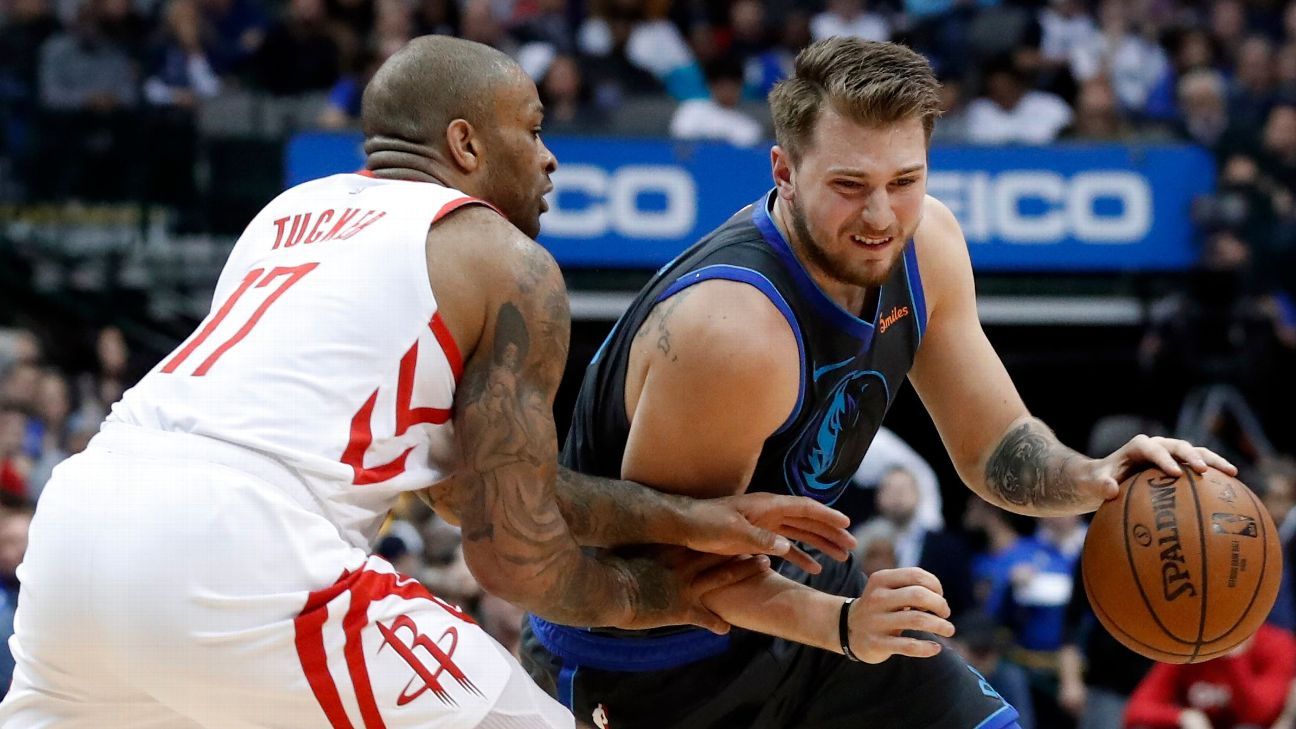 The NBA’s free-agency frenzy is mostly over.

Most multiyear sneaker endorsement contracts include an expiration date of October 1 in the year they’re up, but they also include a 60-day advance window where players can begin meeting with and negotiating with other brands. Meaning as of August 1, this year’s crop of coveted players could begin lining up presentations, mapping out early contract terms and sorting through potential landing places for a new deal.

This year’s footwear class could feature the most potential since 2012, when Russell Westbrook, Blake Griffin, James Harden and Dwyane Wade were all up. Of the four then-Nike athletes, two switched to Jordan Brand, Wade opted for a lucrative deal with Li-Ning, and Harden re-signed with Nike for just two years, before bolting for a 13-year deal with Adidas in 2014.

SneakerCenter explores sneaker culture across sports and entertainment, as told by the athletes, artists, enthusiasts and brands who power the movement. Watch on ESPN+

Once again, each of the top five players in this year’s class are currently under contract with Nike. The brand would ideally like to keep all five: Devin Booker, Luka Doncic, Kyle Kuzma, D’Angelo Russell and PJ Tucker.

In addition to the handful of players expected to move the needle, there’s a depth to this year’s free-agent class rarely seen in the industry. Both Draymond Green and Karl-Anthony Towns have expiring Nike deals this fall. Though no longer in Los Angeles and with Big Baller Brand facing uncertainty ahead, Lonzo Ball is expected to help push the pace for an exciting, young Pelicans, and could do so with a new multiyear shoe deal in hand by the start of the season.

Other players around the league expected to draw interest include Marcus Smart, as Boston-based Puma has already moved into the lead to eventually sign the nearby Celtics guard. Though talks are ongoing, he was spotted walking into USA Basketball’s welcome gathering clad in Puma gear, then laced up the brand’s Uproar sneaker in white, blue and red to kick off USAB training camp. Thanks to their overnight free-agency haul, LA Clippers shooter Landry Shamet is also hitting the market at an ideal time, potentially able to take advantage both of the team’s LA market size and their expected chance to contend for a championship right away this season.

While the class may feature a host of players that resurgent brands like Puma and New Balance could look to pick off from their existing Nike and Adidas deals, five players in particular are expected to draw the most interest to move the needle for a new company, should they end up signing elsewhere.

While Booker has been part of a crowded roster at Nike, the company has found ways to spotlight his rise as one of the NBA’s best young scorers. He was among a handful of players to be given player exclusive colorways of Kobe Bryant’s ongoing signature line the past two seasons, notably the Kobe 1 and Kobe 4 Protro editions.

The company’s lifestyle category, Nike Sportswear, also incorporated him into a special release of his very own Air Force 1 Low colorway, in tandem with a commercial and campaign with Foot Locker. He opted for a light blue and tan colorway that pulled away from the Suns’ less versatile orange and purple hues, which was an instant hit with sneakerheads.

Booker’s potential is seen both on the court in wearing a brand’s key performance models, and off the floor, where he’s become one of the league’s featured players known for his tunnel fashion. With social media accounts like @LeagueFits launching, fully dedicated to highlighting players’ arrival fashion, brands are placing more emphasis than ever on off-court style.

During the spring and early summer, which saw fellow rising young gun Jayson Tatum‘s transfer from Nike Basketball to Jordan Brand, Booker was also often discussed as an ideal candidate to add to Michael Jordan‘s roster of NBA players.

Doncic is in the rare position to immediately capitalize on a stellar rookie season. A year after entering the NBA with more hype than any recent European prospect, Doncic is set to have the Nike deal he signed as a young pro in Europe expire. His teammate Kristaps Porzingis fell into similar luck in 2017, when his lone NBA season under contract with Nike had been paying him shy of six figures and was set to expire. He turned his breakout rookie year in New York into a new seven-year deal with Adidas, paying him between $3 million to $6 million annually.

For Doncic, the market this summer and into the fall is expected to be similarly aggressive, with a variety of US-based brands and Chinese companies looking to enter negotiations.

Just this summer, Giannis Antetokounmpo became the first European-born player to receive a signature shoe. Brands see Doncic, the reigning Rookie of the Year, in the same category. He helped to headline the launch of Nike’s auto-lacing Adapt BB sneaker in January, and is thought to have potential to headline a variety of styles and designs.

In addition to his on-court production — he averaged 21.2 PPG, 7.8 RPG and 6.0 APG — he comes with a built-in global fanbase. His jersey was the 13th-best selling in the NBA last season, and he finished second in All-Star fan voting among Western Conference forwards, behind only LeBron James.

His production on the floor has met the hype. His potential as a crossover star is already underway. Now Doncic will begin discussing brand deals, with the value of his next sneaker deal and the visibility from it expected to exponentially increase.

A relatively unknown late first-round pick in 2017, Kuzma’s game and fame exploded during his rookie season in Los Angeles.

Now that he’s expected to be a Laker for the long haul, having been spared from a potential trade to New Orleans, brands have significant interest in Kuzma. While his rookie shoe deal with Nike paid him less than six figures per year, his next deal will be significantly larger.

Nike quickly realized Kuzma’s potential, using him in the Adapt BB launch and featuring him in several of Kobe Bryant’s signature pairs as the ongoing torchbearer of the Laker franchise.

Executive produced by Kevin Durant, The Boardroom explores the most fascinating trends and innovative endeavors across the business of sports, featuring conversations with athletes, executives and business titans. Watch on ESPN+

“It’s been great,” Kuzma said. “I’ve always been a Nike guy growing up. As a sneakerhead, you always have a special place in your heart for the brand with all of the different kinds of shoes they’ve done. To build that brand together was a no-brainer.”

Along the way, he also added an innovative additional deal to his portfolio, signing an ambassador deal with the GOAT app, an online resale marketplace that features tens of thousands of rare and limited-edition sneakers. The concept earned praise from fellow players around the league, and also landed him on an episode of “The Boardroom” to discuss the unique partnership.

“It’s definitely exciting,” he said. “Going from where I came as an unheralded prospect out of high school and college, going into the NBA, it’s going to be pretty cool to see sneaker companies take a big interest in me. It’s a credit to my hard work.”

When Russell was drafted by the Lakers in 2015, he immediately became one of the most sought-after players in his rookie class. After blossoming in Brooklyn and signing a max deal with the Warriors, he’s once again expected to garner that level of interest.

From a sneaker standpoint, Russell checks several boxes for brands. He’s known for both his on- and off-court style, and loves to wear flashy colors and graphics in tandem with a series of accessories in games. His “DLoading” persona and signature “ice in my veins” celebration after big shots continue to raise his profile.

While the 23-year-old could continue to wear Nike Basketball’s latest and greatest, he’s also a prime candidate to stay within the Nike Inc. umbrella at either of its subsidiary brands. A transfer to Jordan Brand has been discussed among executives, which would land the Jumpman logo on a Warriors roster they’ve been absent from during the team’s five consecutive Finals trips. It’d also be a natural fit for Russell, who has an Air Jordan 1 tattoo along his left leg.

As the company continues to invest in its Converse Basketball relaunch, Russell could prove to be a great addition there as well. He’d be joining forces with Kelly Oubre Jr. as one of the few faces of the iconic heritage brand, as it looks for additional expressive and versatile players to wear the new All Star Pro BB sneaker, a modernized take on the classic Chuck Taylor, built with today’s materials and technology.

Heading into his 10th season in the NBA, Tucker has established himself not only with his never-ending flow of rare sneakers on the floor, but also in his role as a 3-and-D glue guy on a contending Houston Rockets team. His rise in awareness across social media, at fashion week shows around the world and in legacy fashion magazines in recent years have earned him the title of “sneaker champ of the NBA.”

“I never really cared, and I never wanted to be a champion of sneakers. I don’t even know what that is,” he said, with a laugh. “Honestly, it’s just something that’s pretty cool to be thought of as.”

Known for spending $200,000 of his own money on sneakers in each of the past two seasons, Tucker is expected to command a new high six-figure brand deal this fall. Both New Balance and Puma are thought to be potential suitors, while several Chinese brands have also reached out, given his awareness level throughout the region and the country’s longtime connection to the Houston Rockets.

Of course, Nike remains the favorite to sign the player that’s provided some of the Swoosh’s most coveted kicks with endless visibility, whether it was debuting Nike’s Fear of God collaboration with designer Jerry Lorenzo, the Jordan 4 Retro created with musician Travis Scott, or the variety of ridiculously rare “OVO” exclusives made only for Drake’s inner circle. Wherever he lands, look for Tucker to continue his love for the sneaker game, as he always has.

“If there were no Instagram, if there were no video cameras at games, I would still change shoes and do it every single day like I do,” he said. “It’s part of my life, and something that I do every day.”