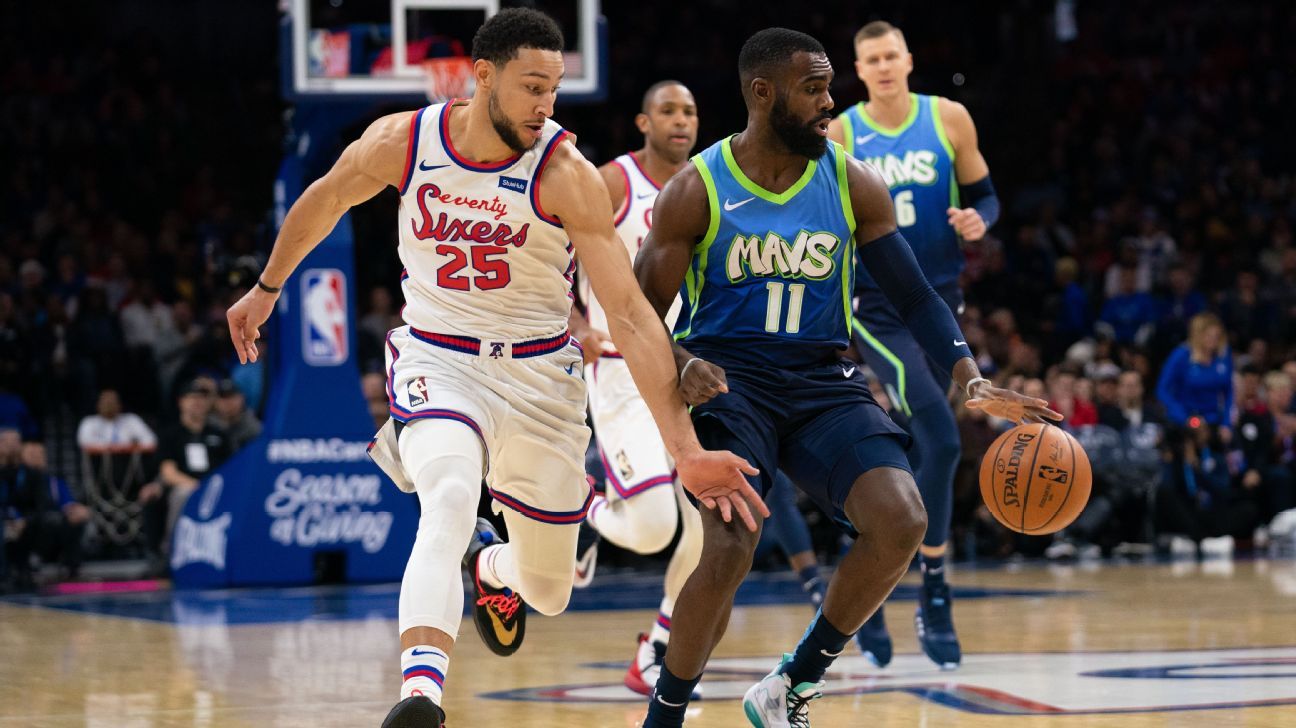 PHILADELPHIA — There must have been a lot of confused NBA fans around the country as the ESPN broadcast went to commercial break after the first quarter.

Not because the Dallas Mavericks, minus MVP candidate Luka Doncic, held a seven-point lead over a Philadelphia 76ers squad that entered Friday night with the NBA’s best home record. Dallas, after all, had served notice of just how dangerous the Mavs could be without their 20-year-old superstar by snapping the Milwaukee Bucks‘ 18-game winning streak on Monday night on the road.

But folks had to be wondering who the heck that was who hit the 25-foot pull-up to beat the buzzer at the end of the quarter. Don’t feel bad if you weren’t familiar with Ryan Broekhoff. He’s about as anonymous as NBA players get, a 29-year-old Australian who looks more like an accountant and had played a total of 27 minutes in the Mavs’ first 27 games.

Hopefully I don’t get traded for a washing machine https://t.co/SWqn1nBwgA

It was sort of fitting, though, that Broekhoff got significant minutes in the Mavs’ 117-98 victory over the 76ers. Dallas’ latest addition to its impressive collection of road victories was a national showcase of sorts for the depth and culture the Mavs have developed, elements to their early success this season overshadowed by Doncic’s flashy dominance.

“One of our biggest strengths is our depth,” said Mavs power forward Kristaps Porzingis, who had 22 points, a career-high 18 rebounds and three blocks against the Sixers. “We have so many different weapons and so many different guys that can come in. I almost feel bad because we have so many guys that can come in, and sometimes they don’t get the opportunity. But I would say we have a very professional team where everybody stays ready.”

The sprained ankle that will sideline Doncic until after Christmas came at an especially tough time for the Mavs. He was injured at the beginning of a brutal stretch of schedule, going down in the opening minutes of a home game against the Miami Heat that was the opener of a five-game run through the beasts of the Eastern Conference.

Yet it’s not really stunning that the Mavs have an opportunity to finish that gauntlet 3-2 if Dallas can improve its remarkable road record (11-2, tied with the Bucks for the NBA’s best) with a win against the Toronto Raptors on Sunday afternoon.

Doncic is the primary reason the Mavs have realistic hope of competing for a ring — perhaps as soon as this season, and certainly in the near future. But Dallas has demonstrably proved that this is a really good team even without him.

That explains how the Mavs have managed to win two of the three games this season when Doncic’s plus-minus was a double-digit negative. And how Dallas’ week without Doncic so far has been highlighted by doubling the total home losses suffered by the Bucks and Sixers this season.

“We’re deep,” said Mavs coach Rick Carlisle, who used zone defense to derail the Sixers’ offensive flow. “This has been a good thing for us, just from the standpoint of having other guys put in the situation to have to step up. It’s forced us as coaches to make certain adjustments that we have to make. You never want to be without a guy like Luka Doncic. He’s a great all-around player, and we need him back as soon as possible. But as long as he’s out, we have a plan and the guys are executing well.”

Porzingis is starting produce the kind of numbers that are expected with his maximum-salary paychecks. He has averaged 23.3 points, 14.3 rebounds and 2.5 blocks over the past four games, building on his trend of excellent work on defense and the glass and showing signs of getting comfortable on offense.

The hope is that the Mavs will be able to bank on Doncic and Porzingis putting up big numbers on a nightly basis soon and for years to come. Part of what makes the Mavs difficult to prepare for is that it is hard to predict who else will have big nights on a game-to-game basis.

It was Tim Hardaway Jr.‘s turn Friday. He shook off a 5-of-27 shooting funk from the previous two games by scoring 19 points on 7-of-8 shooting in the first quarter. He finished with a team-high 27 points in the win, making 7 of 11 3s.

It was reserve guard Seth Curry who starred in Monday’s victory in Milwaukee, when he scored 26 points on 9-of-15 shooting. It was one of three 20-plus-point performances in a four-game stretch for Curry, whose previous season-high scoring total was 19.

Every player in the 19-9 Mavs’ rotation has played a starring role in a win at some point this season. That includes J.J. Barea, Boban Marjanovic and Courtney Lee, a few veterans who get DNP-CDs most nights but epitomize Carlisle’s “Stay ready” mantra.

“We have different guys statistically carrying a load every night,” center Dwight Powell said. “It’s not always the same guys. Obviously our stars Luka and KP are going to do what they do and lead us, but guys are ready to step up into bigger roles or different roles, whatever it may be. It’s a team that’s all about winning, so we’re trying to find ways, whatever it is. So long as the focus is on winning, we can always make adjustments.”

How the Mavericks were built

The Mavs have a pair of young, potential superstars as their cornerstones; Dallas bundled past, present and future first-round picks to get Doncic and Porzingis, giving the franchise a clear direction and hope again. But an overlooked aspect of the Mavericks’ emergence is the development of a homegrown corps of glue guys who broke into the league as afterthoughts:

Those sorts of unselfish role players are crucial to Dallas’ developing chemistry — “a brotherly focus,” Hardaway said — and the culture the franchise wants to create and maintain.

“It’s a championship culture that was set way before us,” Brunson said. “We’re just doing our best to get it back. We really have a special group here, so we’re just trying to get that back.”