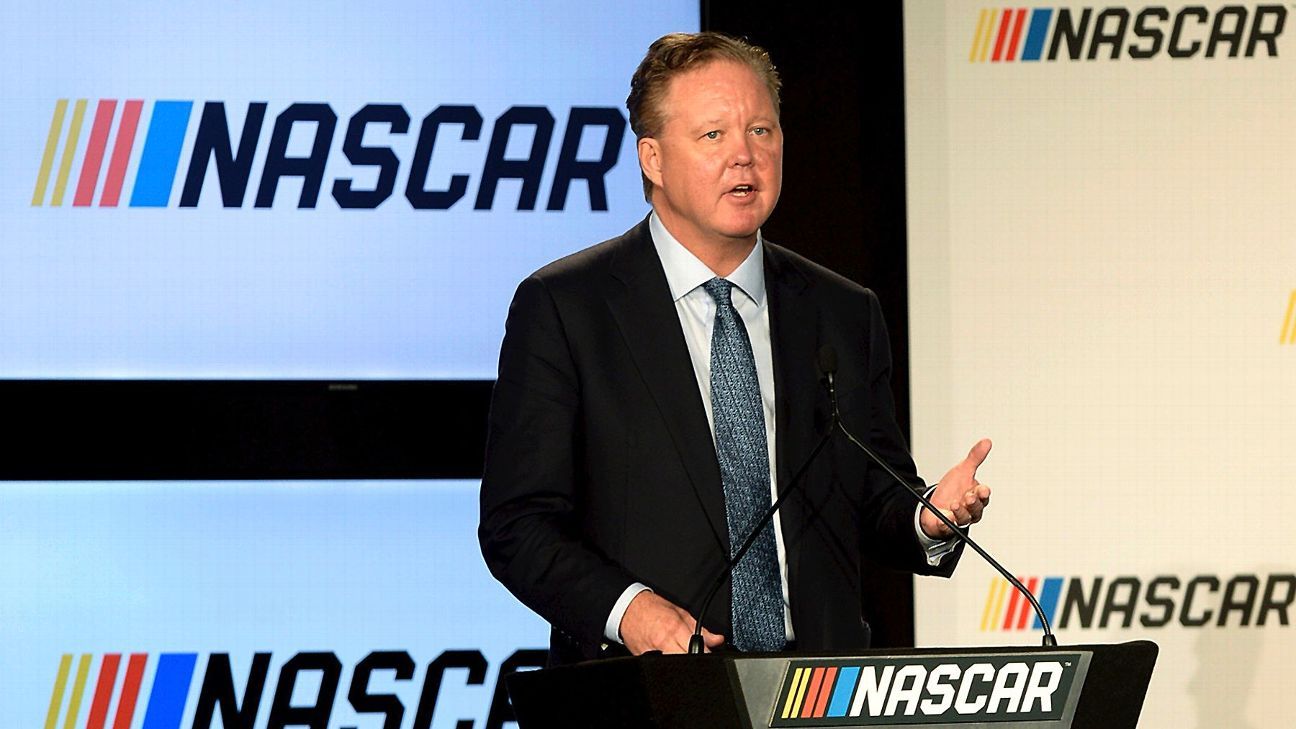 Most of the NASCAR industry has the right to be upset with Brian France today.

The NASCAR chairman and CEO failed to stop at a stop sign and was arrested Sunday night in the Hamptons on charges of driving while intoxicated and misdemeanor possession of a controlled substance, according to a Sag Harbor Village (New York) Police Department news release. He was released from jail Monday morning.

With his leadership already in question as NASCAR’s attendance and television ratings continue to drop year after year, France could take this opportunity to exit permanently, not just take what he termed an “indefinite” leave of absence Monday night. It would be a way for him to leave not based on performance but for horrible decision-making.

Looking back, France has spearheaded many of the best projects in NASCAR, including helping create and negotiate a unified television package encompassing all tracks, a commitment to diversity and overseeing a sport that hasn’t had a death in a national series race since 2001.

But his next idea will be the most pivotal: Should he stay or should he go?

There are no excuses. Maybe France does have a problem, and if he has an addiction, that is a sickness that often requires treatment rather than self-healing and in many ways is no longer a matter of choice for the individual. But as the leader of a national sport, especially one that is struggling, France needs to portray an image of stability and show good judgment. At the very least, he lacked that Sunday night.

France already has been criticized for not being engaged as much as he should and for not showing leadership amid what many view as a pivotal time. This arrest makes him a laughing stock to many, his frequent statements of being “locked and loaded” when it comes to him and his family leading the sport amid rumors of a potential sale have now turned into a punchline.

While there have been no public documents recently that would confirm France still does not own any shares in NASCAR — past public documents have indicated France’s sister, Lesa France Kennedy, and their uncle, Jim, are the co-owners of NASCAR — it appears that Brian’s permanent fate could still be determined by other members of the France family. For the time being, Jim will fill Brian’s role.

They might want to see if Brian could continue to lead the sport, issue a mea culpa, possibly go to rehab and emerge in 2019 as a new, recovered leader. Who doesn’t like a good comeback story?

But the sport doesn’t have time for a ship with even less of a visible captain, either inside or outside the garage. Brian France occasionally comes to races but is not front and center. The industry certainly doesn’t have an across-the-board confidence in him.

The difficulty is no one has that type of relationship in the garage. NASCAR vice chairman Mike Helton is the closest, and he might be just the person to take a public, leadership role to get NASCAR through this crisis before he opts to retire.

Current NASCAR president Brent Dewar might be more a natural choice when looking at business succession plan, but he also has appeared as Brian’s guy. He also has been a little bit of a polarizing figure, probably some of that not his fault as it is part of the nature of his role.

Racing operations head Steve O’Donnell and chief operating officer Steve Phelps both have earned respect for the way they approach their jobs but they also have their hands full as both the competition and sponsorship areas of NASCAR are in a state of transition.

For the time being, it’s Jim France who will be at the helm. He has always been known as a behind-the-scenes leader and don’t expect that to change. NASCAR has no plans, as of Monday night, for him to hold a news conference and deliver a much-needed rallying cry.

It appears that everything is the status quo with the exception that instead of Brian asking Jim’s permission on major projects, the people underneath Brian will ask for that permission. As a board member, Jim already was involved in the major decisions at NASCAR. Now, he just might have a little more say and give a little more direction to those who answered to Brian at times during the week but were the public faces of the sport in the boardrooms and in the garages on most days.

There are no easy choices for NASCAR’s ruling family, which could also possibly keep France as chairman as more a ceremonial position and just institute a new CEO.

Time will tell. This one thing is for sure: There should be some upset folks over today’s news and France’s actions.

NASCAR had a great race Sunday with a great storyline of a first-time winner Chase Elliott, son of a NASCAR Hall of Famer. Elliott needed 99 races — and eight, often excruciating, runner-up finishes — to earn his first victory.

That was supposed to be the NASCAR storyline that would reign this entire week. And then Ford would introduce its new Mustang body style for the NASCAR Cup series Thursday. A new winner and a new body style. The talk all focused on the racetrack.

Instead, NASCAR once again somehow found a way to step on itself, to ruin the mood and have everyone talking about everything but what NASCAR wishes was the storyline. Damage control and talking points will take center stage this week instead of a new young winner and the move of an iconic body style to NASCAR’s top series.

The France family Monday night just put off making this pivotal decision: Let this sideshow continue for the sake of family pride and control or make a change to signify this sport isn’t just ignoring the signs of the road.

Serena Williams: ‘I am often exhausted, stressed, and then I go play a professional tennis match’
Laviolette named coach of Team USA for worlds
Giants cut captain Ogletree, save $8.25M vs. cap
‘Dry him up’ – Neil Wagner’s plan for Virat Kohli
Gagli, Molinari out of Oman over virus concern