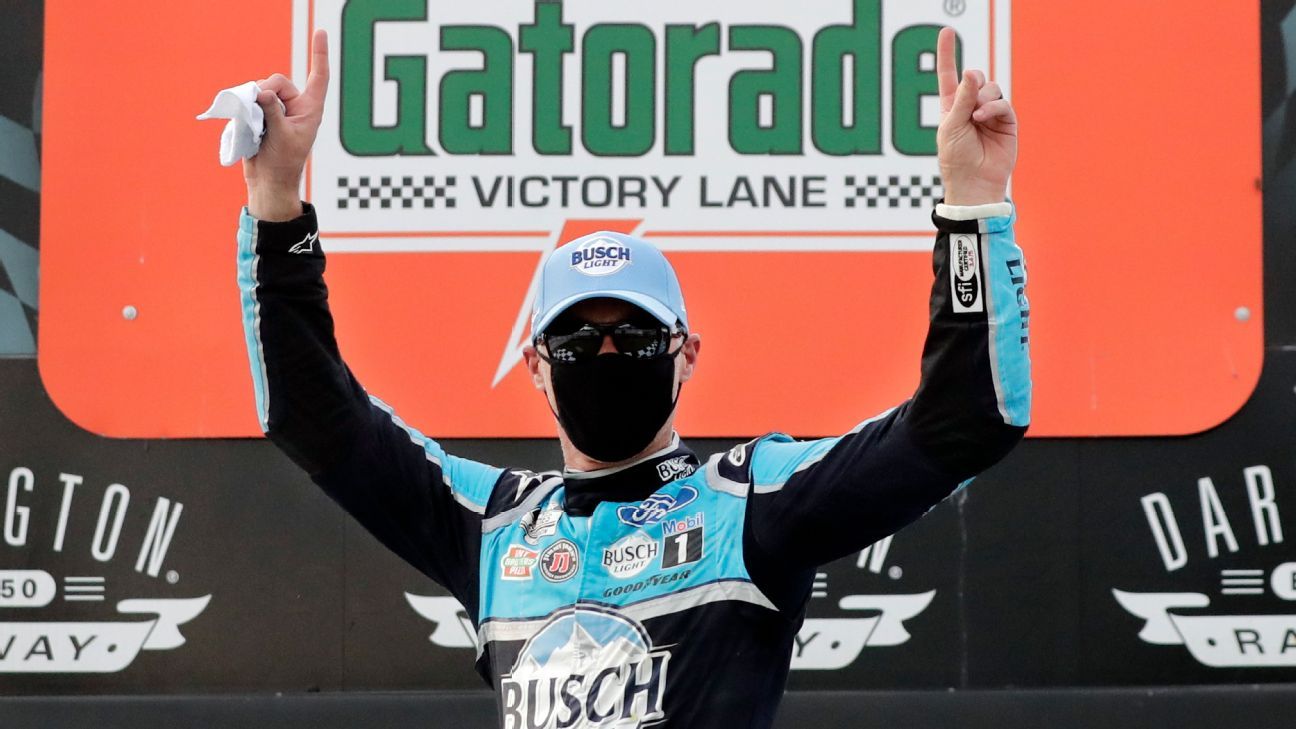 The hours leading up to Sunday’s 400-mile race at Darlington Raceway — actually, the months leading up to it — were so strange. The moments immediately following the event, as Kevin Harvick reached a rarely achieved career milestone and did his celebratory donuts in front of an empty grandstand, they too were like nothing NASCAR has ever felt or seen before.

But the 3 hours, 30 minutes and 34 seconds in between? Those felt perfectly normal. The most normal that anyone in the NASCAR community, fan or competitor, has felt in nearly 2½ months.

“I just want to thank everybody from NASCAR and all the teams for letting us do what we do,” Harvick said, standing at the start/finish line after becoming just the 14th driver in NASCAR history to reach 50 career wins. “I didn’t think it would be that much different if we won the race, but it’s dead silent here. We miss the fans.”

What NASCAR and its teams did was a lot, designing and then adhering to a health-conscious protocol aimed at protecting competitors during an event held in the midst of the COVID-19 pandemic.

Everyone at the racetrack had their temperatures checked before admission into the garage, and that garage was spread out past its normal confines and throughout the Darlington Raceway infield. Working and walking lanes were marked by miles of red tape, with promises of ejections and fines should anyone dare not to stay in their prescribed social distancing lanes or refused to wear protective facemasks. NASCAR said that none of the nearly 900 people on the racetrack grounds were found to be symptomatic, even so much as a slightly elevated temperature.

The only hiccup in the protection plan came during the race, when 40 team spotters, normally crammed into a tiny area atop the press box, drifted away from their designated spots scattered throughout the empty frontstretch grandstand and began to congregate. When they were shown on television, many among the television audience questioned the closeness of their formation and NASCAR officials warned them to spread back out.

Quipped former longtime NASCAR spotter Joey Meier on Twitter: “The PGA says ‘now you know how we feel.’ ” He was referring to the instances when golf fans watching on TV have called to report rules violations, and changes to competition were made because of it.

Outside of that incident, which was fixed quickly, the remainder of the race checked all the boxes of a typical Darlington Raceway event, featuring 10 lead changes among six drivers and 10 cautions that took up roughly 20% of the race’s 293 laps. The day was hot, NASCAR’s oldest speedway was characteristically slick, and the racetrack they call “Too Tough to Tame” managed to bite plenty of victims. One victim was Jimmie Johnson, who was closing in on a win of the first stanza in the three-stage race.

Heck, there was even an infield grass fire between turns one and two without any race fan campfires to blame it on, and at one point Kyle Busch’s Toyota peeled a vinyl sponsorship banner off of the outside retaining wall, which promptly wrapped itself around two other racecars.

“There was those times when you looked in the grandstands, and yet when you see an empty seat, you feel a set of eyeballs that are coming through the camera lens,” said Kurt Busch, who finished third behind Harvick and Alex Bowman. “And that’s the way I approached the race. Even just walking down pit road (in prerace), crew members with masks on, you halfway don’t recognize anybody until I got to my guys. And that was our core group. We went into battle today together, and we brought home a nice top-five finish.”

There were plenty of NASCAR fans in Darlington, South Carolina, on Sunday — they just weren’t inside the racetrack. At the Raceway Grill, perhaps NASCAR’s most famous trackside diner, fans ate signature hamburger steaks at picnic tables across the street from the track’s second turn, anxious to hear the live sound of racecars. Other tailgaters could be found scattered through parking lots and front yards in the neighborhoods that surround the 70-year-old speedway.

But though the track was surrounded by law enforcement officers guarding the 1.366-mile egg-shaped oval on the lookout for gate crashers, there were no incidents reported outside of one rogue camera drone that had to be grounded.

“I think that everyone was just so happy to be back, as odd as the vibe was around it all, everyone also felt happy again,” said Johnson, who led nine laps before wrecking out of the lead and extending his career-worst winless streak to 100 races. “It was good to see everyone, even if you couldn’t shake their hands or hug them yet. That will come in time if we all do what we need to do right now. It was like a big reunion.”

That held particularly true for two of the drivers in Sunday’s race, Ryan Newman and Matt Kenseth. Newman was behind the wheel of his No. 6 Ford for the first time since a horrifying crash at the end of the Daytona 500 on Feb. 17, exactly three months earlier. Kenseth was back on the track for the first time in nearly a year and half, taking over the No. 42 Chevy vacated by the firing of Kyle Larson for using a racing slur during a televised NASCAR iRacing event on April 12. Newman finished 15th. Kenseth finished 10th.

“I was pretty nervous getting going,” Kenseth said of his first race back since November 2018, a race run without any practice or qualifying sessions. Moments after climbing from his car, he was already focused on the next race on the calendar, back at Darlington on Wednesday evening. “The car was faster than I was today. I definitely held the team back all day long. I just need laps so we can sync up even better than we already did today. So, I kind of like this idea of getting right back at it so quickly.”

That is a universally shared sentiment among those who make their living in the NASCAR garage, eager to run as many laps as they can to make up for the 91 days lost since Phoenix, the last race run before Sunday’s return. NASCAR has announced its schedule through June 21, with 20 events across the sanctioning body’s three national series — Cup, Xfinity and Trucks — over the span of 36 days.

It’s all an opportunity to feel normal again, even if it is a new normal.

“Getting out of the car, it was like, I don’t really know what to do here,” Harvick said of his visit to an empty Victory Lane, with only masked Fox Sports pit reporter Regan Smith, a boom microphone and two still photographers present. “There was that sense of awkwardness, until we get this all situated, of exactly what we’re supposed to do … no team guys. I was able to give my team guys a nice little elbow bump there as I left Victory Lane and tell ’em, ‘Great job.’ But those guys didn’t even get a chance to take a picture with their car.

“Just a lot of sacrifices that go into it. But in the end, in the big picture of things, being able to do what we did today — and that’s race– is what everybody wants to do.”