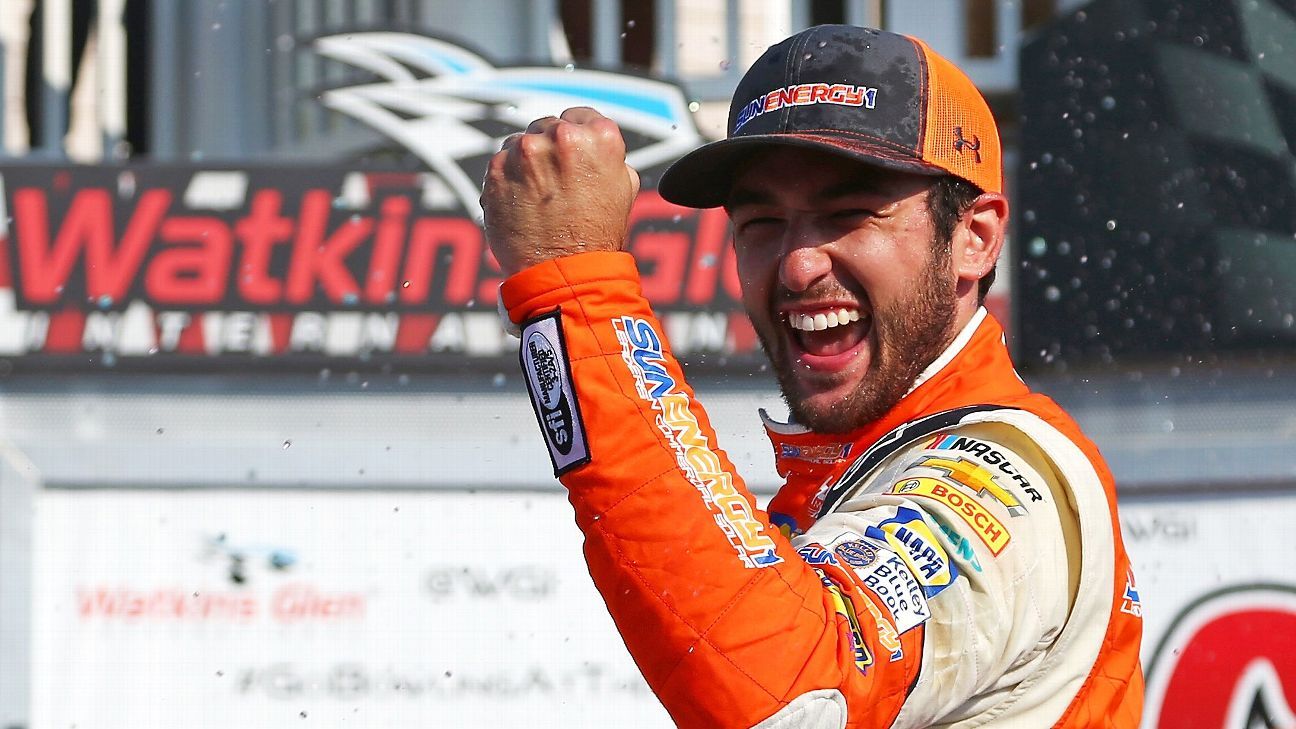 It was Elliott’s first career win, in his 99th Cup start, and 250th for Hendrick Motorsports. It assured Elliott a spot in the playoffs, as he became only the fifth driver to win a race outside of the Big 3 of Kyle Busch, Kevin Harvick and Truex, who have combined to win 16 of 22 races.

Truex ran second to Elliott for most of the final stage before beginning a steady close. It was a two-car race, as the rest of the field was more than 11 seconds back.

Truex closed to the back bumper of Elliott’s No. 9 Chevy as his car moved wide heading out of the first turn of the final lap, but Elliott regrouped and pulled away as Truex sputtered home second, out of fuel.

Truex was bidding to become the first Cup driver to win three straight road races since Tony Stewart accomplished the feat in 2004-05. Jeff Gordon holds the record with six wins in a row (1997-2000).

It promised to turn into a fuel mileage race as the laps wound down, and nobody has been better with the strategy than Truex and crew chief Cole Pearn. All three of Truex’s road course wins were won with strategy, including last year at The Glen.

Elliott led Truex by 1.1 seconds with 19 laps left, Jones was third over 10 seconds behind, and Busch was 18 seconds back in eighth in what turned into a two-car struggle.

With both cars turning up dirt while bulling through the chicane, Truex was a few car lengths behind with just over 10 laps to go.

With his famous father, Hall of Famer Bill Elliott, spotting from above, Chase maintained his slim advantage as Truex tried to find a way by.

Lapped traffic allowed Truex to get close — it was down to one car length with under three laps to go — but he never found the magic he needed as Elliott drove a flawless race. When Truex bobbled in the chicane on the final lap, Elliott was home free.

Elliott won the race’s second stage and brought the sellout crowd to its feet with a pass of Busch. Elliott pulled out to a half-second lead while Truex was fighting to get back to the front after restarting 12th.

Midway through the segment, the Big 3 of Busch, Truex and Kevin Harvick were running in the top 10, but Elliott dominated and beat Busch by 1.3 seconds.

Busch’s day was ruined when Matt DiBenedetto brought out a caution just past the midpoint of the race. The fuel probe malfunctioned on the ensuing pit stop, and the crew got only a few gallons into the No. 18 Toyota. That forced him to pit again, dropping him out of contention after he dominated the opening segment.

NZ Super clubs get handout amid pandemic
Mavs’ Cuban: ‘No idea’ on when NBA returns
Lowe: How NBA players are parenting through the coronavirus shutdown
Recruiting dead period extended through May 31
Celtics’ Smart says he’s cleared of coronavirus