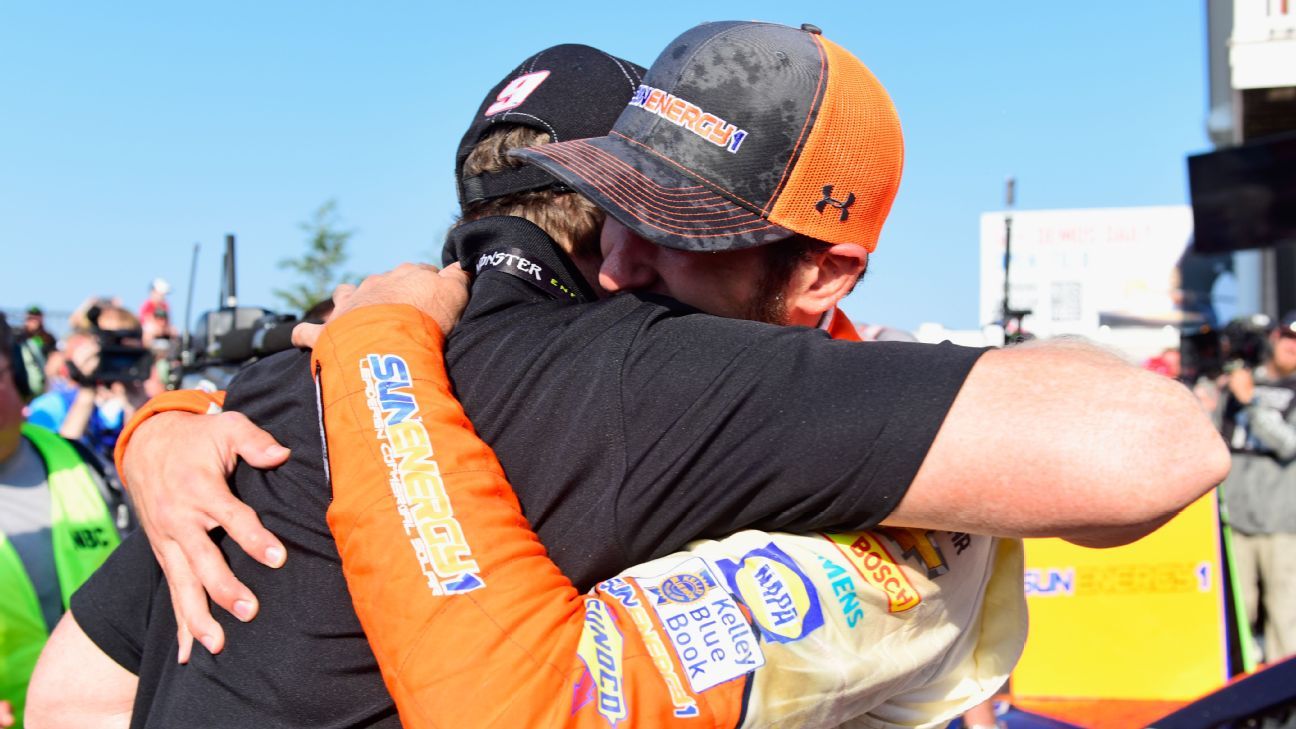 But rarely does a father get to play a role in the victory.

Because one spotter — the person who helps a driver know of the position of other cars around the driver — can’t see the entire 2.44-mile road course, teams employ additional spotters.

Chase knew one spotter he wanted, a former spotter of his when he was being groomed racing short tracks: NASCAR Hall of Famer Bill Elliott, his father.

“He always spotted for me in that stuff [growing up] — it’s not a new thing to have,” Chase Elliott said. “He did fine. I didn’t crash.”

Bill, the 1988 NASCAR Cup Series champion and winner of 44 NASCAR Cup Series races, enjoyed playing a small role in the win in which Chase led the final 34 laps, holding off a hard-charging Martin Truex Jr. for dozens of laps.

“I tried not to get any emotion at all there the last 20 laps or so, just trying to watch cars and see what people were doing,” Bill said. “A couple of cars had a few issues.

“I knew a couple of places, traffic was going to play part. … With the way it worked out, I didn’t know who was going to run who out of gas. Luckily, we ran Truex out of gas.”

Bill was based near a chicane commonly referred to as “the bus stop” portion of the track.

“My role was very little,” Bill said. “My goal was to, if anything happened in the bus stop or if I could give them information if somebody was having problems in the bus stop, tell [the team] on the radio and go from there.

“But Chase did good in the bus stop the whole time here.”

Bill was so excited about the win, he was able to get some friends to give him a golf cart ride to victory lane before the car even got there following Chase’s celebration on the frontstretch.

A 16-time most popular driver, Bill has watched his son win the 2014 NASCAR Xfinity Series title but go 99 races before winning his first Cup victory.

Both Bill and Chase had eight second-place finishes before their first win.

“It was kind of a weird day, but a lot of luck was on our side,” Chase said. “I told him to burn it down [in celebration] and he wasn’t able because it ran out of gas. It was kind of one of those days.

Bill said that sometimes things are the result of fate. He saw Kyle Busch have a fueling issue that kept Busch from challenging for the win, then saw Chase make a mistake on the final lap but not have to worry about it because Truex ran out of gas.

“The 9 car wins the 99th start,” Bill said. “I won my first Cup race at a road course at Riverside. The only Xfinity race I’ve ever won was right here on a road course.

“And then, lo and behold, he wins his first on a road course. You don’t think about these things until after the race. It’s kind of weird. … Sometimes certain things line up, and you can’t ask why or what or how things work that particular way.”

Ariel Helwani’s MMA thoughts: The time is now to book Conor McGregor’s next fight
Koepka joins chorus saying Reed cheated in sand
Kyrie’s season is over (again), but does that mean Brooklyn’s is?
SL look to embrace ‘role definitions’; WI eye improvement in bowling
Barnwell forecasts AFC South offseason moves: How the Titans could use their tags