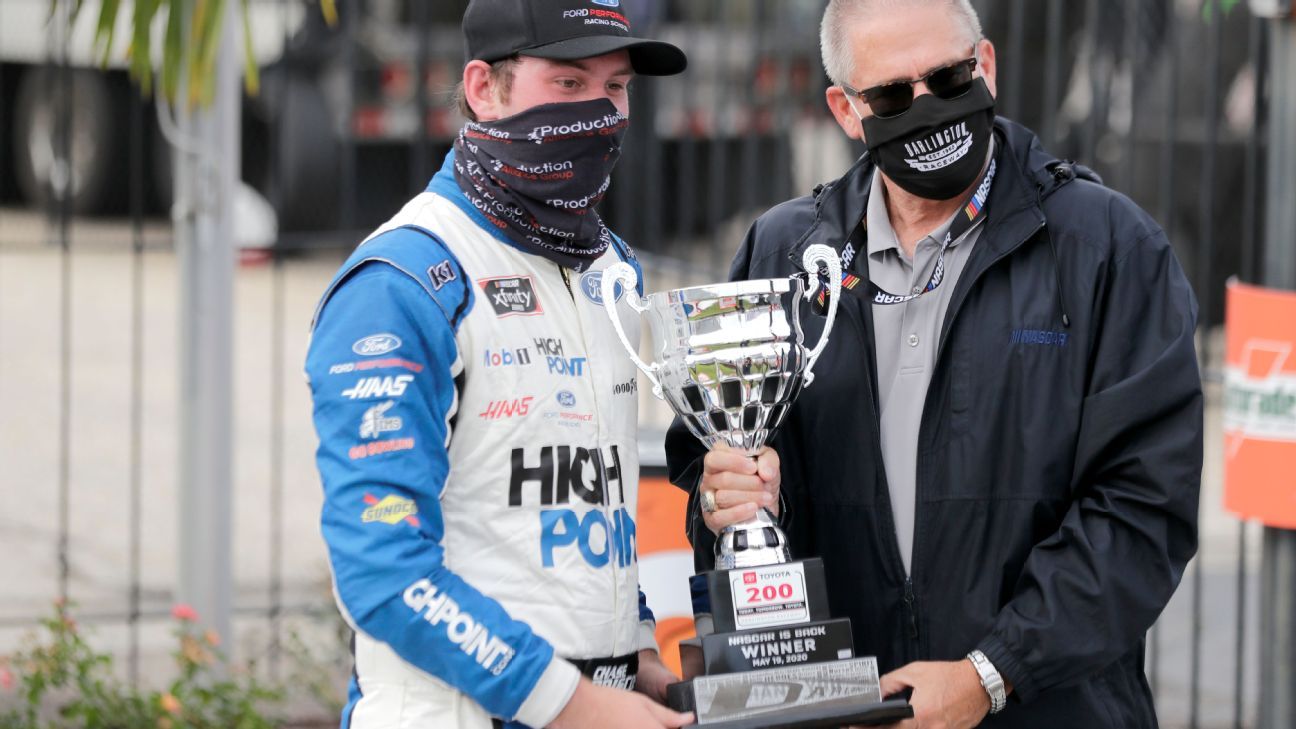 CHARLOTTE, N.C. — Darlington Raceway president Kerry Tharp says he and NASCAR felt a responsibility to get the return to live racing right with the rest of the sports world watching during the coronavirus pandemic.

“When we found out about a month ago we were going to be doing these events I told people not only was it an honor to be the first, to begin live sports back in the country, but it comes with a responsibility,” Tharp said on Thursday as NASCAR’s oldest superspeedway held its third race in five days.

“When you start off doing something like this you have to get it right. So there’s been a lot of focus and really a lot of people pulling on the same piece of rope.”

NASCAR announced along with other major sports in March it was suspending live events due to the pandemic. The plan to re-open without fans began last month with a call to Tharp to inquire if his South Carolina facility, a two-hour drive from where most of the race shops are in Charlotte, North Carolina, could be ready in time for a mid-May event.

The Carolina Panthers sent the head of security to Sunday’s Cup event, the first of seven races in 11 days between Darlington and Charlotte Motor Speedway, to observe procedures and practices that might be helpful when the NFL team begins re-opening its facility and planning for games.

The Panthers, according to a team spokesperson, are looking at early June for re-opening Bank of America Stadium and the NFL schedule currently is set to begin the second week of September.

“They sent a representative down here to see how our screening process worked,” Tharp said. “He worked with some of our security people . . . to just see how the overall layout of how everything happened when you’re bringing in your competitors.”

Tharp also has been in touch with the PGA Tour, which hopes to resume its schedule in June.

“All sports are going to be different, but the main thing is just be very, very organized and buttoned up,” Tharp said. “When we did our screening for the competitors, we did a pre-screening protocol that they had to complete before they could even get on a roster. Then we had screening here on property that consisted of temperature checks and asking them about symptoms and things of that nature.

“And then everybody wearing the mask. I have not seen anybody on the property the entire time since we started this that has not been properly with a mask on.”

Tharp said no testing was required as the governing body wanted to be thoughtful of those in the general public needing tests.

The screening process included taking the temperature of every person each time they entered the track. Additional questions regarding potential symptoms also were a part of the process every time someone entered the infield.

Once inside it was mandatory everyone where face masks. The track also created sanitizing stations across the infield.

Similar procedures will be used at Charlotte Motor Speedway this weekend as NASCAR holds its longest race, the Coca-Cola 600, on Sunday.

“It’s been very thorough,” Tharp said. “You’ve got to have a really good plan in place and people at the right place to implement the plan. For each sport maybe they have different plans that they follow.”

Tharp reminded NASCAR is unique in that it is not a sport based on person-to-person contact as the NFL, NBA and other sports are.

“The contact we have in our sport is usually involving cars. Of course, you could have some contact after the race,” he said, jokingly referring to the occasional post-race fight that sometimes occurs in NASCAR. “I don’t know if there is total correlation with what we do with our sport and what some of the other sports may do.

“I just know for what we wanted to accomplish here, and now moving up to Charlotte, has really looked like it’s worked.”

Tharp talked with PGA Tour officials earlier this week and among the discussions was how to handle media.

“We’re doing something with the media who aren’t on site called a virtual media center,” he said. “It’s not a whole lot of bells and whistles to it, but it does provide five or six options that you would typically get if you were in the media center like better camera angles, in-car cameras for some drivers, timing and scoring monitors.

“It’s almost like the next best thing to being in the media center that you can get at home.”

Tharp said it’s too early to determine when some fans might be allowed to return to the track.

“Obviously, there would have to be certain protocols put into place similar to what we’ve done here,” he said. “It’s too early to tell when that may happen and how it may happen.

“Our top priority right now is getting better at this each and every event and then see where we are when it comes to having fans back. The biggest focus is to make sure we conduct these events safely and then move to the next stage.”