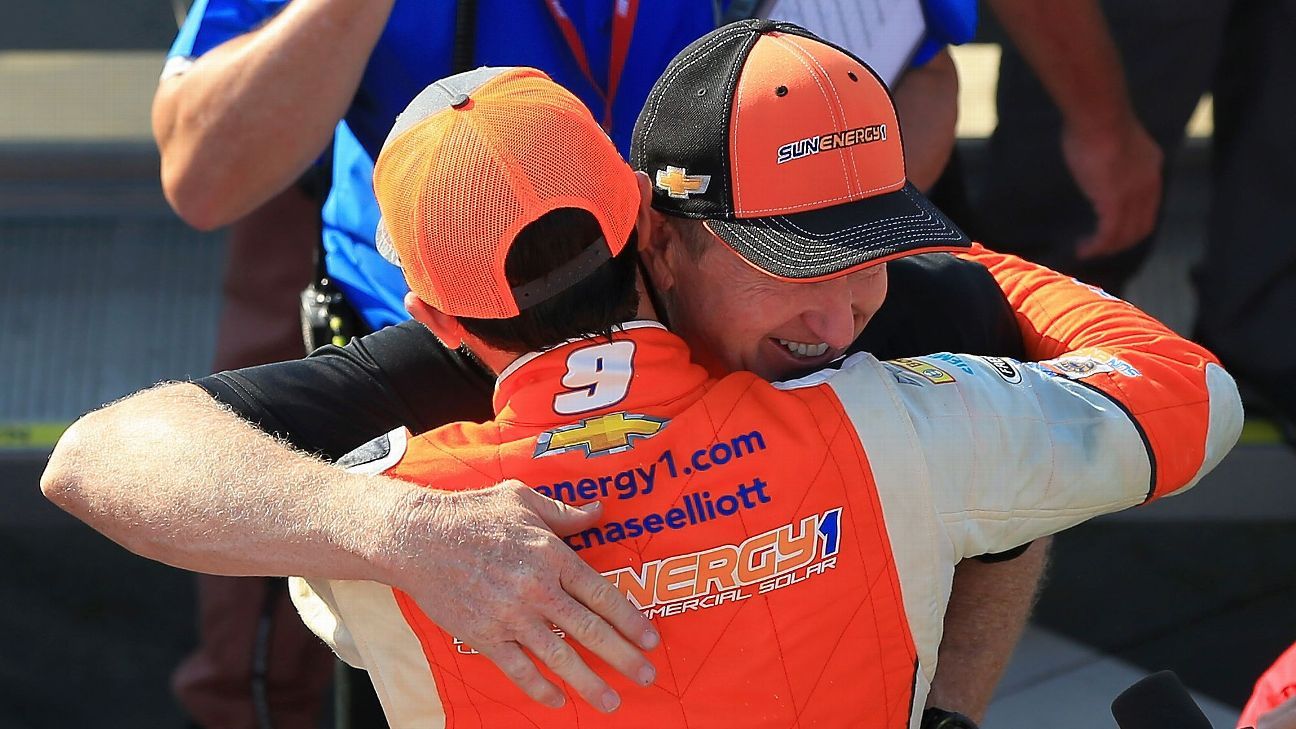 It was a long time coming, but Chase Elliott finally got in victory lane, holding off Martin Truex Jr. and getting just enough fuel mileage to collect the checkered flag on Sunday.

Not to mention, he got a push to victory lane from a seven-time champion — not a horrible way to celebrate win No. 1.

In honor of Elliott’s finally getting a win, here’s an article that’s entirely(mostly) Elliott-related.

There were several comparisons between Bill and Chase Elliott’s first career wins. They both had to wait a little while (Bill took 116 races, Chase took 99), and both came on a road course (Bill won at Riverside).

Where Elliott had the advantage is he won at 22 years old, while Bill’s first win came at 28 years old.

But Elliott isn’t even the youngest first-time winner this year. That honor goes to Erik Jones, at 22 years and 38 days old, compared to 22 years and 251 days for Elliott.

We’ve known for a long time that Elliott was going to win a race. With his pedigree, history in lower-tier series and propensity to run up front, it was an inevitability. The surprise was how long it took, especially given that he came close so many times before.

The most amazing part might be whom he’s tied with for fourth-most. You guessed it: his father, Bill, who also had eight runner-up finishes before his first win.

The drivers who had more second-place finishes before picking up a win were James Hylton (12 and the usual answer to any trivia about second-place race or points finishes), Harry Gant (10) and Sterling Marlin (9).

Lost in this breakthrough victory for Elliott was the fact that it was a landmark victory for Hendrick Motorsports.

It was the 250th Cup Series victory all time for Hendrick, which became the second team in series history to reach the mark Hendrick joined — who else? — the Richard and Lee Petty-led Petty Enterprises, with 268, a mark very much within reach for Hendrick.

The only time Hendrick waited longer than that was in 1985, when it didn’t win at all in its second season as a single-car operation in the Cup Series.

And if you were curious (I was), Elliott is the ninth driver to win his first career Cup Series race while driving for Hendrick Motorsports. That breaks a tie with Roush Fenway Racing for the most first-time winners for a team in series history.

I usually go three sections, but this is my most weird, fun and interesting-to-me note of the week.

AJ Allmendinger finished second in this past Saturday’s race at Watkins Glen. He was looking for his third career Xfinity Series win, with the first two coming in road course races in 2013.

The weirdest part is that Allmendinger hadn’t made a start in the series since he won at Road America and Mid-Ohio in 2013.

He would’ve been the first driver in series history whose first three career wins were recorded in consecutive starts, but they would’ve come over a five-year span.

Wimbledon cancels ’20 event due to pandemic
Khabib wants Ferguson in August if UFC 249 off
UFC 249: What a Tony Ferguson vs. Justin Gaethje main event might look like
British Grand Prix: Silverstone and F1 will decide whether race can go ahead by the end of April
USA Rugby to file for bankruptcy amid shutdown