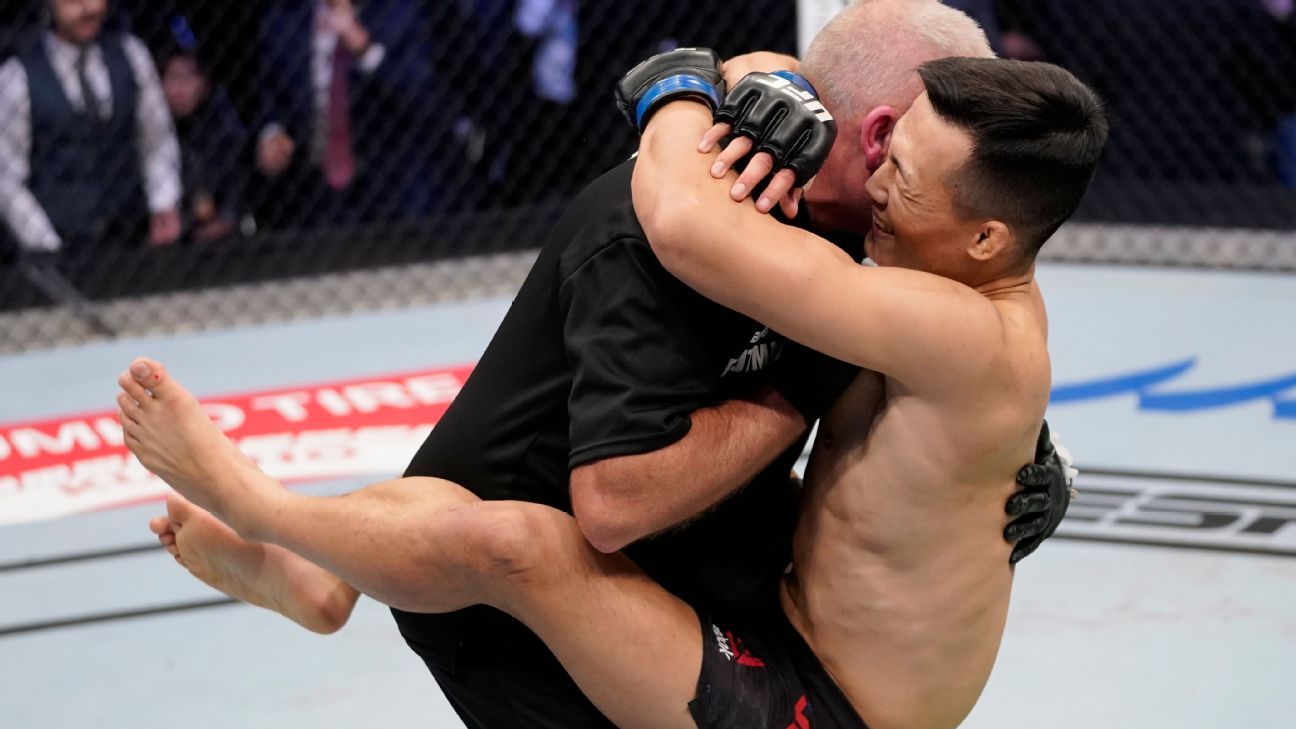 BUSAN, South Korea — The UFC’s last card of the decade showcased an exciting South Korean in his native country against one of the sport’s legends in Frankie Edgar.

When it was all said and done, it was Chan Sung Jung who took advantage of the opportunity.

Jung, known by the nickname “The Korean Zombie,” is ESPN’s No. 8-ranked featherweight. He solidified himself as a legitimate title contender. Edgar, meanwhile, will now face questions about his short- and long-term future.

And in the co-main event, No. 8-ranked light heavyweight Volkan Oezdemir picked up a needed win against one of the division’s hottest prospects in No. 10 Aleksandar Rakic.

Let’s take a look at who should be next for the top names from UFC South Korea.

Who should be next: Zabit Magomedsharipov

The ‘Korean Zombie’ is ready to fight for a title shot now. Unfortunately for him, Max Holloway is one of the greatest featherweights of all time and deserves an immediate rematch against Alexander Volkanovski, who ended Holloway’s title reign with a unanimous-decision win in UFC 245.

In the meantime, it would be a true No. 1 contender fight for Jung if he faced Zabit. Ranked No. 6 by ESPN, Magomedsharipov has looked unbeatable at times. The Zombie looks better than ever at age 32. This is a marquee fight that should headline a card in the spring.

Who should be next: Rob Font

This loss, although pretty drastic, doesn’t change a whole lot, in my opinion. Frankie is the type of guy to always jump at a fight even if it’s a short-notice fight against a featherweight who is at the top of his game halfway across the world in that fighter’s South Korean backyard.

You can make the case Edgar should never have taken this fight, but it further proves the best weight class for Edgar is 135 pounds.

I don’t know if Edgar will make his way to a title shot at 135, but I think he may have something to offer the division. That said, Cory Sandhagen is too tough an opponent for his 135 debut. Font has a fun boxing-heavy style, and that’s a good fight for Edgar.

All fights from UFC Fight Night: Egdar vs. Korean Zombie are available to watch on ESPN+.

Watch the complete card on ESPN+

Who should be next: Thiago Santos

This is a simple process of elimination. Just about everyone in the top 10 in the light heavyweight division already has a fight booked. Santos would love a rematch with Jon Jones, but I’d love $1 million — it’s not going to happen. Santos needs to win a fight to get another title shot, and Oezdemir, even though this fight was very close, has shown real improvement in his last two fights. Plus an Oezdemir-Santos fight offers a lot of knockout upside. It’s an entertaining matchup.

Who should be next: Jacare Souza

This might feel like feeding Jacare to the wolves, but that’s where he’s at in his career. He’s coming off a lackluster loss to Jan Blachowicz. Rakic is a dangerous fight for Jacare, but it offers a ton of upside.

If Jacare wants to continue his career, the only reason to do it would be to chase that UFC title he’s never had. Accepting a fight against Rakic, while dangerous, is the best way to get on that path.

And for Rakic, it’s a big-time name on the resume.