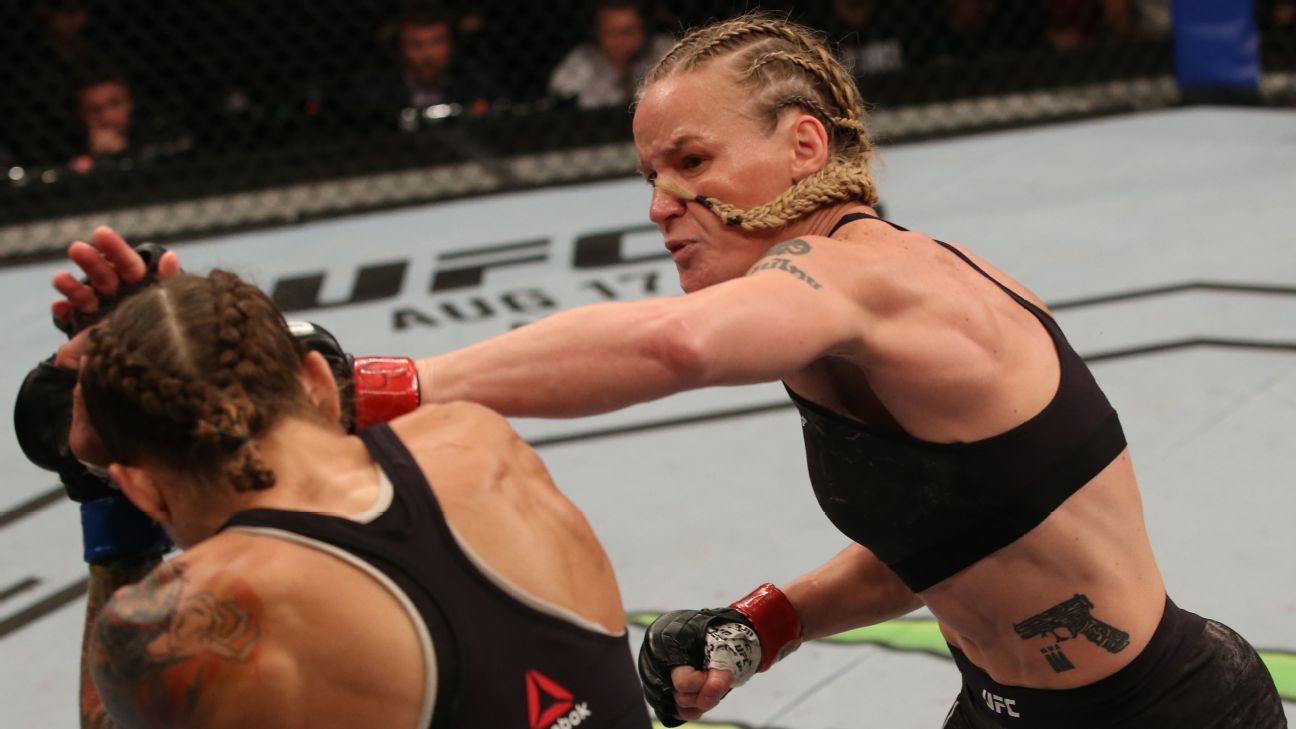 Valentina Shevchenko defended her UFC flyweight title on Saturday. Consider that a sentence you might see a lot in the coming years.

Shevchenko dominated Liz Carmouche in a five-round decision at UFC Fight Night in Montevideo, Uruguay. That’s two title defenses thus far, and it’s anyone’s guess where that number will ultimately end up. Anything can happen in MMA, but the 125-pound champion does not appear to have anything close to an equal right now.

Who should be Shevchenko’s next challenger? And what’s next for the two welterweights who fought in the co-main event? Here’s ESPN’s take.

Shevchenko has repeatedly said she wants to be an active champion, which could eventually turn into a problem, as she’s liable to clear out the entire division in the next two years. For now, however, there are plenty of potential challengers to line up — starting with Chookagian.

There isn’t a ton of anticipation for a Shevchenko-Chookagian matchup, but it’s the obvious choice. Chookagian is 5-2 in the UFC, and the two women she lost to — Carmouche and Jessica Eye — received the last two flyweight title shots. Chookagian hasn’t finished a single opponent in the Octagon, even though she’s arguably one of the best strikers in the division. She’ll be a massive underdog when she takes on Shevchenko, but then, everyone is.

There just isn’t much to say about Carmouche’s performance on Saturday. Attacking Shevchenko is easier said than done, for sure, but Carmouche never seemed to make a major adjustment or even try to pull off something spectacular or unexpected. She did nothing that would have even made it possible for a miracle to happen.

Carmouche will remain highly ranked after this result, but she could probably win her next 10 fights and it wouldn’t be enough for her to get another title shot. Not as long as Shevchenko is the champion. Carmouche originally was supposed to fight Modafferi last month, before the UFC booked her in the title fight instead. Both Carmouche and Modafferi are pioneers of women’s MMA. That matchup made sense when it was initially made, and it still does.

I suggested this matchup a few weeks ago, after Dos Anjos lost to Leon Edwards in San Antonio. Would a fight like this offer Luque far more to gain than Dos Anjos? Yeah, probably. But that’s, unfortunately, the situation Dos Anjos finds himself in. He’s lost three of his last four. Luque has won six in a row and has had finishes in nine of his 10 wins in the UFC. He is more than deserving of a big-name opponent like Dos Anjos, and this fight would look great as a main card appetizer at a major event.

Perry has absolutely reached that point where the actual results of his fights don’t really matter. Without peeking, can you tell me Perry’s record over his last 10 fights? His last five? You’re having trouble, aren’t you? Because it doesn’t matter. A Mike Perry fight has turned into an attraction in and of itself. The guy is an entertainer.

And he has already called out Gall before. Or, at least, halfway called him out. Apparently, Perry didn’t appreciate some of Gall’s “excuses” for his loss to Diego Sanchez earlier this year, and he let Gall know about it on social media.

Competitively, the fight makes plenty of sense, and there would be good banter between them beforehand. The problem, of course, is the terribly broken nose Perry suffered on Saturday. He underwent surgery Sunday morning, and his manager told ESPN there can be no contact on the nose for six months. Even if Gall takes another fight in the meantime, this one is worth booking when Perry is healthy.