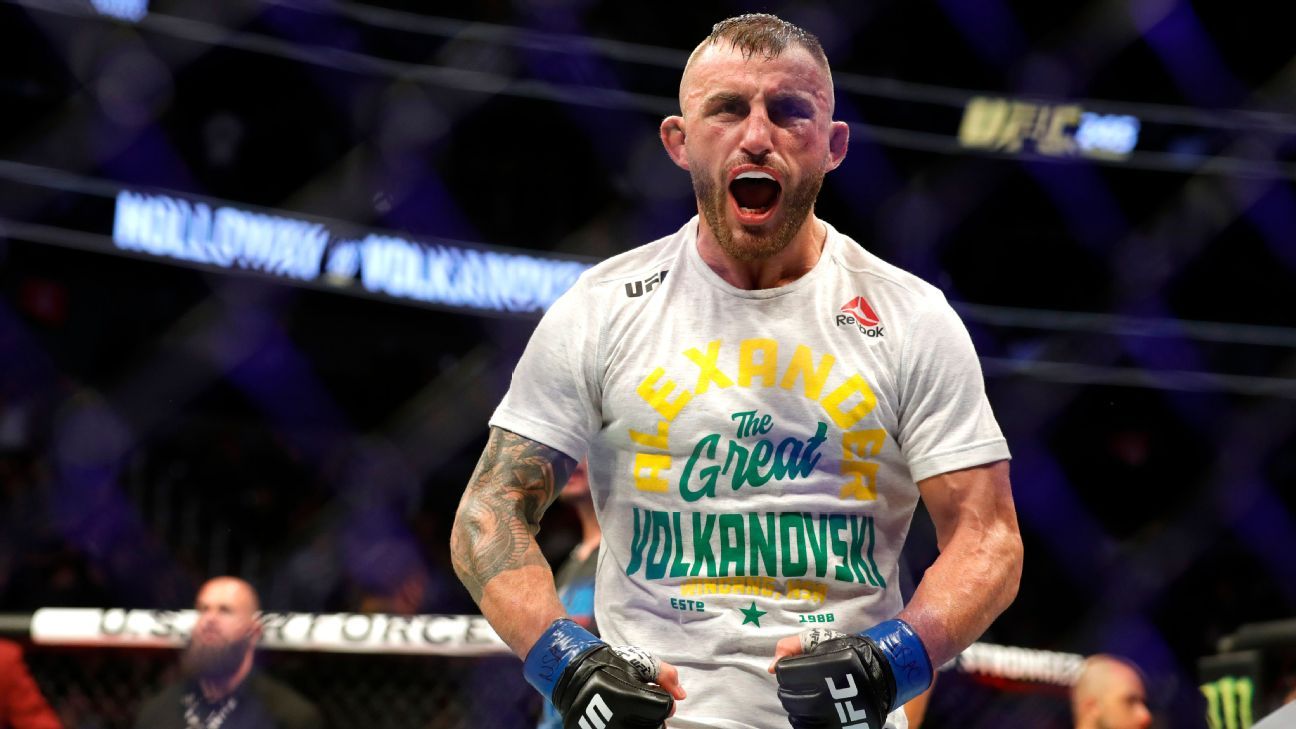 Australia started 2019 with one UFC world champion and finished with another, in what was another bumper and typically eventful year for the sport Down Under.

Alexander Volkanovski was on Sunday crowned the UFC’s featherweight champion as he rounded out a stellar 12 months with victory over Max Holloway in Las Vegas. The Illawarra product had long been on the record as saying he would one day be champion, and fulfilled his own prophecy with a perfectly executed game plan that saw him claim a unanimous decision win.

“I fought Chad Mendes, then [Jose] Aldo and then fighting Max Holloway, so three of the greatest featherweights probably our division’s seen,” Volkanovski said on his return to Australia. “So it’s a massive year for me and I said last year, or even earlier, I was going ‘2019 I’ll be the champ’ and I was lucky enough to get it done.”

While Volkanovski can now enjoy some “Christmas food” and plot an upgrade of his digs back at home in the Illawarra – he told ESPN pre-fight his current abode wasn’t befitting a UFC champion – before looking to a potential rematch with Holloway, fellow Aussie Robert Whittaker will look back on 2019 with no such delight.

The former middleweight champion was all set for a title defence against Kelvin Gastelum in Melbourne in early February, only to suffer a hernia injury on fight eve that forced him to withdraw. The Australian at last returned to the Octagon in October when he ran into an Israel Adesanya onslaught, a bout that ended in a second-round KO defeat for the man from western Sydney.

Whittaker has since been linked with a return against both with Englishman Darren Till and American Jared Cannonier as the Australian plots his route back to the top and, ultimately, another shot at Adesanya.

While UFC 243 didn’t fall the Australian’s way, the nation’s love of mixed martial arts was certainly on show as more than 57,127 fans packed into Marvel Stadium for an event that broke the promotion’s all-time attendance record which had come at the same venue in 2015.

UFC President Dana White said it best when asked to describe Australia’s growing affinity for one of the world’s fastest growing sports.

“Every time we come here, the fights are really good,” White said after UFC 234 in Melbourne. “I believe it has a lot to do with the energy here in Australia and the fans. Fighters feed off that. This is one of the funnest places in the world to come fight.”

But it hasn’t been all smooth sailing for the Australian fighting cohort, as Whittaker’s defeat and those suffered by Tai Tuivasa, Jim Crute and Jessica-Rose Clark and can attest. Tuivasa lost twice in 2019 – not that it has dented his enthusiasm as Sunday’s shoey in Las Vegas suggests – while Crute and Clark lost once each.

Crute went 1-1 in 2019 and will look to bounce back from his loss to Misha Cirkunov when he heads across the Tasman in February for UFC Fight Night Auckland. A graduate of Dana White’s Tuesday Night Contender Series, Crute will throw down against Michal Oleksiejczuk on a card that will feature a host of Australian and New Zealand fighters and one that is being headlined by in-form Kiwi Dan Hooker’s bout with American Sam Alvey.

Megan Anderson was another Aussie to return a 1-1 UFC record in 2019, one she will look to build on in Norfolk on Feb. 29.

But the big question on every Australian fight fan’s lips will be when Volkanovski returns to the Octagon and whether the UFC lets him defend the title on home soil. Sydney’s Bankwest Stadium and Qudos Bank Arena – located at Olympic Park – have already been thrown up as possible venues, which would allow Volkanovski the chance to fight just a couple of hours from his home town.

Bankwest Stadium could be the harder sell given White told ESPN in 2018 that outdoor arenas “scare me” just as the same venue had been thrown up as a potential host for Whittaker’s maiden title defence.

But it would also ensure a far greater crowd than the 21,000 or so that could cram into Qudos Bank Arena.

For his part, Volkanovski says he will fight whoever is put on front of him, which may yet mean a rematch with Holloway. But no matter who it is in the opposite corner, the 31-year-old Australian will view it as just another step on his journey to become a UFC legend and the clear featherweight GOAT.

“I’ve thought about it all year, I’m not cocky but I knew I was going to get it [ the title],” Volkanovski said when asked about what his title reign might look like. “I’ve had my eye on the division; obviously there are other guys fighting for [a title shot]. I’ve got my eye on them and I believe I can beat them all.

“Whoever’s in front of me, we’ll work out a game plan. I’m too well rounded, I would say there will definitely be a way to go to win every fight in front of me. But again, I’m looking to be probably one of the GOATs myself [and] I don’t reckon we’re far away.

“So beating Max really probably makes me skip a few fights, so now I’m right up there. Give me a couple of fights and then we’ll start throwing my name around as pound-for-pound No. 1 and then obviously the GOAT of the featherweight division.”