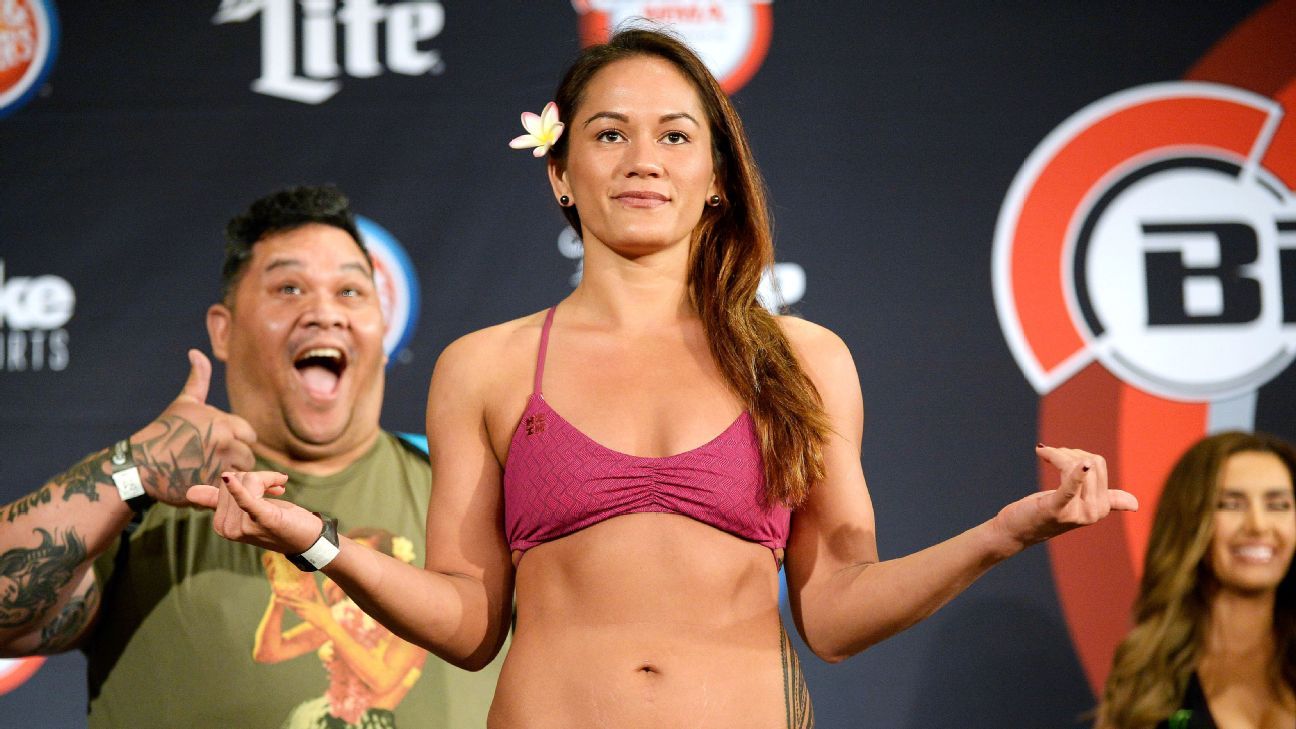 Macfarlane beat Kate Jackson by unanimous decision (50-45, 50-44, 50-44) to retain her Bellator women’s flyweight title Saturday night in the main event of Bellator 236 at Neal S. Blaisdell Arena. The native Hawai’ian was dominant in every round, further cementing herself as one of the best fighters in the world outside the UFC. ESPN has Macfarlane ranked No. 2 in the world at women’s flyweight.

“How could I not come here and represent for everybody?” Macfarlane said in her postfight interview. “I hope I made you all proud. I love you guys, my Hawai’i.”

Macfarlane nearly finished a bloody Jackson with an armbar at the end of the fourth round. She almost had Jackson again in the fifth with hard ground and pound as time ticked off the clock. Both times Jackson survived, but it was not nearly enough. Macfarlane outclassed her with pressure, wrestling, boxing and grappling.

“You guys are seeing the evolution of Ilima-Lei Macfarlane,” said Macfarlane, who was once considered strictly a ground specialist.

Macfarlane (11-0) now has four Bellator title defenses. She has held the title since November 2017. In December 2018, Macfarlane defeated former UFC title challenger Valerie Letourneau by third-round submission in her first fight in her hometown of Honolulu. Macfarlane, 29, had finished every opponent going back to 2016 coming in.

Jackson (11-4-1) had a two-fight winning streak snapped. The England native fought on “The Ultimate Fighter” in 2016, losing to current UFC standout Tatiana Suarez in the quarterfinals. Jackson, 33, has won four of her past six fights overall.

In the co-main event, blue-chipper A.J. McKee defeated Derek Campos by submission (triangle armbar) at 1 minute, 8 seconds of the third round in a Bellator Featherweight World Grand Prix quarterfinal bout. McKee is now on to the semifinals, where he will meet the winner of a January bout between Darrion Caldwell and Adam Borics.

McKee dropped Campos in the second round and looked to be possibly running out of steam before he cinched in a slick armbar out of a triangle from the bottom. It was arguably one of the most impressive submissions of the year in MMA.

“This is just the beginning,” McKee said. “I’m barely showing off jiu-jitsu skills. Welcome to AJ Jiu Jitsu 101. It’s really the beginning of what’s to come.”

The undefeated, versatile McKee (16-0) was rated ESPN’s top fighter in the world under 25 years old in October. The California native has finished five of his last seven fights. All 16 of his victories have come in Bellator and he is one of the promotion’s prized prospects. McKee, 24, trains under his father Antonio McKee, a successful MMA fighter in his own right, at Team Body Shop in Lakeland, California.

Campos (20-10) has dropped four of his last five against Bellator’s top featherweights. The 31-year-old Texas native beat former champ Daniel Straus in the grand prix first round to set up this quarterfinal fight at Bellator 236.

Also on the Bellator 236 card, the undefeated Juliana Velasquez likely set up a future title opportunity against Macfarlane with a unanimous decision win over Bruna Ellen. Jason Jackson beat Kiichi Kunimoto by unanimous decision in a welterweight bout.

Sharapova, Venus face uncertain futures and inevitable questions
McIlroy surprised by return to cusp of No. 1 rank
NHL Power Rankings: 1-31 poll, plus every team’s best decision this season
Who should be next for Conor McGregor, Donald Cerrone?
Light heavyweight Alvarez KO’s Seals in 7th