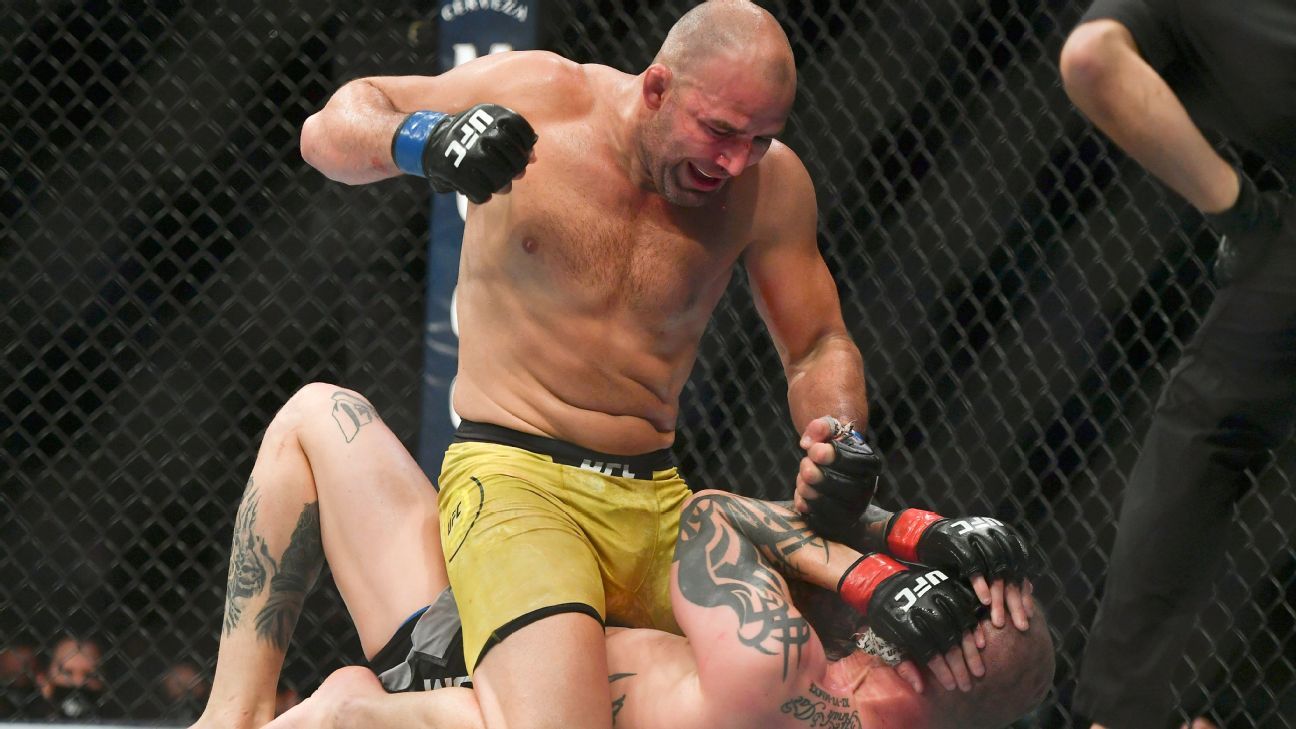 Between the fourth and fifth rounds of his main event bout against Glover Teixeira on May 16 in Jacksonville, Florida, UFC light heavyweight Anthony Smith walked to his corner, sat on a stool and told his team, “My teeth are falling out.”

And lo and behold, they were. Smith (33-15), who lost via TKO in the fifth round, told ESPN later that night he lost two teeth during the fight. He also suffered a broken nose, broken orbital bone and a cut under his right eye.

Many observers, including members of the UFC broadcast team, suggested Smith’s corner failed him by not stopping the bout when referee Jason Herzog didn’t. But Smith, who cross-trains between Kansas City and Denver, told ESPN this week he strongly disagrees with that notion.

“They’re in a tough spot,” Smith said of his coaching staff. “I don’t know if they wanted to stop it or thought about it, but I take that option away from them before we have ever gotten to that point … If you want to sit in my corner, that’s my rule. You don’t stop the fight. You just don’t. Leave it in my hands.”

The scenario brings up an interesting question, which many camps actively discuss before the moment arrives: When is it the corner’s responsibility to stop a fight?

ESPN spoke to several prominent MMA coaches, and their answers revealed a contrast in philosophies.

If I feel if there is permanent damage taking place — not just damage, but permanent damage — I will stop a fight. If it’s a title fight, I will let it go a little further, because that could be a once-in-a-lifetime opportunity, but I have only stopped one fight at the highest level, and it actually was a title fight.

I stopped Douglas Lima versus Rick Hawn, for the Bellator MMA welterweight title. Lima was kicking Hawn’s legs from Round 1, and I threw in the towel in the second round. I will tell you something about Rick Hawn, he was going to let himself die in there. He was never going to quit. In my opinion, there was less than a 1% chance he was going to win when I stopped it. His leg was really gone.

Can you die from leg kicks? The answer is yes. There are fighters who have gotten blood clots in their legs and died. I didn’t think Hawn was in mortal danger, that’s not what I’m saying. But I did think he could have absorbed so much damage to his legs that he would never fight again. His career was on the line. I stopped the fight and he wasn’t mad at me. HIs fiancé thanked me. Everybody after the fight told me I did the right thing.

Most people don’t understand, it’s rare that fighters complain about pain. The adrenaline is so high. You don’t feel pain until much later. I’m not saying there’s no pain, of course, but not as much as you might think. So, if a fighter is exhibiting pain, it has to be really bad.

My opinion is that coaches should never have to stop a fight, because we’re not trained to tell you if someone has permanent damage or not. You’re asking cornermen to do a job they’re not really trained to do. Well, guess what? You’re going to get a lot of controversy and a lot of error. There is a ringside doctor there. I believe the doctor should come in between every round. It makes no sense the cornerman has to make a decision whether you’re at risk or not, when there is a doctor there.

Daniel Cormier breaks down Glover Teixeira’s dominating win over Anthony Smith in the main event of UFC Fight Night Jacksonville and what’s next for the fighter.

There was a small show in 2005, one of the first weeks I moved to Florida. A guy at ATT named Marcel Ferreira was fighting Nick Thompson, and Marcel was beating him through the first two rounds, but he gassed in the third. He was taking a beating, really bad, but he was up on the scorecards, so they let him take a lot of punishment. Eventually they stopped it, but it went too long. He had problems with vertigo and brain issues, he couldn’t even roll jiu-jitsu. He was one of the better guys at ATT at that time, and never fought again.

Different guys react differently. Some guys will hate you forever if you stop a fight. Other guys really expect you to look after them. I think the big factor for me is if you truly think the guy can still pull off a win, and the magnitude of the fight. If it’s a UFC title fight, the highest stakes there are in the sport … these guys signed up for it. You let them take a few more shots. And I see the side where people might say, ‘Oh, that’s disgusting.’ But you can’t think about health all the time, it’s an unhealthy sport. If health is your No. 1 concern, you shouldn’t be fighting. As a fighter myself, it makes me lean towards leniency. Let it go. That’s what I signed up for.

It’s not an easy call. If I have a guy who doesn’t have a track record for winning late, usually if that guy falls into a hole, there’s no coming out. The one-punch power is gone. The ability to lock a submission is gone. Someone who is fatiguing really hard — a striker who is no longer striking and looking for a takedown, looking for survival — it’s usually only going to get worse from there. One minute on a stool between rounds is not going to be enough for him. He needs 15 minutes and water, and maybe he’ll be dangerous again.

I haven’t stopped a high-level fight as a coach, but I hope I would. I’d like to think I would, even if I knew the guy would hate me forever. This is an unhealthy sport, but there’s a line where you choose health. It’s about finding that line.

To put it succinctly: The time to throw in the towel is when you believe your fighter has no chance of winning.

In our ‘cousin sport’ of boxing, there is a culture of doing this a lot more than in MMA. Why? Because MMA is a new sport and there are unrealistic expectations from new pros to keep an undefeated record. Look at boxing. Odds are, a pro has probably had more than 100 amateur fights. Then he had a bunch of four-rounders, six-rounders, eight-rounders, before finally 10- and 12-rounders. The key point being the frequency of competition. Back in the day, boxers could fight every two or three weeks. A trainer would not hesitate to stop a fight, because their fighter can go again in two or three weeks.

I would have stopped the fight, corner could have saved their guy from getting finished. Some mistakes in that corner tonight. And I love those guys! Too much instruction, no crowd to filter it. Anthony Smith is a savage, but props to @gloverteixeira on big victory.

Compare that with MMA. Although it is somewhat changing with the emergence of a real amateur scene thanks to the [International Mixed Martial Arts Federation], it’s not unheard of for someone to come from a core sport like wrestling, have less than 10 MMA contests and end up in the biggest shows, such as UFC or Bellator. So, with less than 1% of the contests a boxer would typically have to reach a similar point, their number of contests have dropped to two or three per year (when it should be 15 to 20), with a huge emphasis on winning. Your paycheck is 50% what you hoped for if you lose in MMA, and one or two bad nights could see you unemployed. Think of that level of pressure, that is no doubt forcing trainers to hesitate when it comes to throwing in the towel.

All that being said, it is still the responsibility of the head coach to throw in the towel when they believe their fighter has no chance of winning. It’s the fighter’s responsibility to show the coach what he or she is capable of in the training room, and staying with that same team for many years to build that bond. If a fighter is a ‘gym hopper,’ then they cannot expect their coach to really get to know them.

Personally, I don’t talk about it directly with my fighters, but they have seen me throw the towel and they constantly hear me talking about ‘updating their software, while keeping the hardware safe.’ Pro MMA careers are short, and less than 1% of athletes will retire with ‘forever money.’ The majority will be looking to rejoin the workforce in some capacity, which is an important consideration, too.

I don’t ever judge any coaches or corners on this, because I don’t know the relationships they have or what’s been agreed upon between them. But I tell my guys, once you don’t have a chance to win and you’re taking damage, the fight is over. Even in practice, if they start getting dinged up by head shots, I call it. It’s just not worth it to me. I don’t care about MMA more than I care about my guys. We love what we do, but my No. 1 purpose with MMA is to see my guys and girls succeed in life.

Stopping a fight, it’s not even something I think is controversial. Once you know your athlete has no chance to win, what the f— is the point? And listen, yeah we’re experts in the corner and we know our fighters, but fans understand MMA. Reporters understand MMA. We can all kind of come to that conclusion around the same time. It might vary a little bit for some of us, but there’s kind of a place where you say, ‘This guy doesn’t have a chance to win anymore.’ And I would say, when you have that thought, more than 90% of the time, you’re right. I think you just have to look at it with an honest heart. Once you see that, you have to call the fight — and that’s not being disrespectful to your guy, that’s being responsible as a head coach for your team and your fighter.