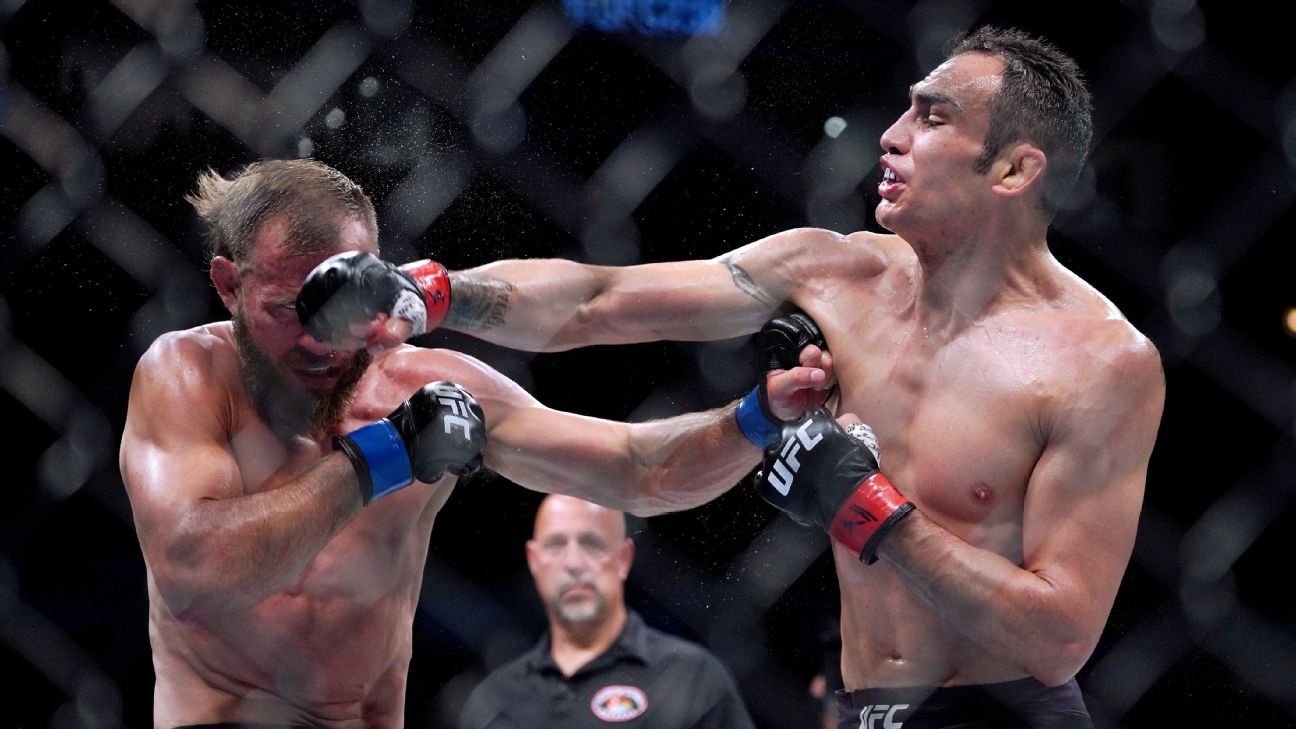 What a difference a day makes.

If you would have asked MMA fans on, say, Sunday if they still wanted to see the Khabib Nurmagomedov vs. Tony Ferguson fight happen on April 18, I’m certain the majority would have answered with a resounding yes.

However, now that it appears as though Nurmagomedov won’t be able to fight on that date because Russia has closed its border due to the spread of the coronavirus, the majority of MMA fans voicing opinions on social media are now telling Ferguson to stay home.

First, before we continue, a quick recap of how we got here:

Nurmagomedov left San Jose, California, over a week ago because he says he was told by the UFC the event with no home would happen overseas. He wanted to be closer to home, and who could blame him, right?

He first tried to go to Abu Dhabi because, according to what he says he was told, it appeared as though the event would happen in the United Arab Emirates. However, the UAE then said no to that idea, Nurmagomedov said.

So he went back home to Dagestan.

Over the past few days, the UFC has told fighters it is looking at locations in the United States, not overseas anymore. Oklahoma, California, Florida and Kansas have been brought up, I’m told. Most likely a Native American tribal land.

The problem is, Nurmagomedov is stuck in Russia, with the borders closed. He can’t get out anymore.

Now, Nurmagomedov said the UFC told him he could go home. However, privately, the UFC is telling people it never gave Nurmagomedov permission to do so, I’m told.

But during these uncertain times, who cares? Nurmagomedov has every right to want to be with his family right now, and if that is why he went home, I applaud his decision.

But the show is going on (for now).

So, the UFC offered Ferguson a fight against Justin Gaethje recently.

Great fight. But it’s not Nurmagomedov vs. Ferguson. Gaethje is in, but Ferguson is still weighing several options, I’m told.

The UFC has also talked to other fighters about populating the card, but again, there isn’t a location yet.

And that’s where we stand as of today.

But wait, the fans are now telling Ferguson to stay home?

I posted a poll on my Twitter page Tuesday. I asked the public what they would do if they were in Ferguson’s shoes: take the Gaethje fight on April 18 or wait for Nurmagomedov?

Over 70% of the votes said they’d wait for Nurmagomedov.

I disagree with those people.

First, let me just say this: I don’t think the April 18 event should happen. I don’t think WrestleMania should happen this weekend, either. I think when there is a pandemic and the entire world is being told to stay at home, asking fighters to compete — not to mention train for these fights — with other people in close contact goes against everything the government is telling us to do right now.

That said, if the UFC is determined to put on this card and the fighters are OK with competing on the card (and trust me, they are — I’ve asked many of them and not one has said otherwise), why should Ferguson stay home?

Because he might lose out on the Nurmagomedov fight? For his legacy?

Ferguson has fought only once since October 2018. Why turn down a high-six-figure paycheck right now for the possibility of maybe fighting Nurmagomedov in a few months? Fans like to talk about irrational things like titles and legacy. Those things mean nothing in the real world. You can’t deposit a title in your bank account. You can’t buy dinner with a lightweight title.

At the end of the day, this is prizefighting. If any fighter tells you that the money isn’t important to them, they are lying. It’s all about the money, and it should be about the money. What these men and women are doing is so dangerous, the money should matter.

I said last week that whenever normalcy resumes, I wouldn’t be surprised if the UFC books Nurmagomedov vs. Conor McGregor right away. Not because it’s the right fight to make, but because it’s the most lucrative fight to make. The company will need to make a lot of money quickly when this is all said and done, and that fight would do the trick. Everyone got mad at me when I suggested that because, I think, they thought I was saying McGregor should replace Ferguson right away.

No way. Again, it’s not what I want to see happen, I was just reading the tea leaves.

And guess what? I still think it’s a possibility. So what would Ferguson do then? He could be the odd man out … again.

So, Tony — if you’re reading this, take the money and run. Everyone else can worry about legacies and titles.

Daniel Cormier reacts to Jon Jones’ recent arrest, saying he can’t take any joy out of the troubles his longtime rival is going through.

Something has to change when it comes to Jon Jones. Is it changing training camps? Is it leaving New Mexico for good? Is it getting stripped of his belt again? Is it going to rehab for a considerable time? That’s not for me to decide. But I do believe that if everything just moves along like nothing happened — again — that would be a mistake and another indication that he isn’t seeing what the rest of us are. The status quo isn’t healthy for him right now. His statement was promising — I thought it was on point — but it’s just words at this point. He has to actually change his lifestyle and not just talk about it. I sincerely hope he gets the help that he needs. … Is “clout chasing” the most annoying term in MMA these days? No mas. … That being said, I do think there are some fighters who like to throw their names into the hat to “save the day” but then ask for a huge pay raise, ensuring that the fight won’t happen. A trick as old as time. … Why do I get the feeling Dustin Poirier and Colby Covington didn’t actually make up? … Sorry to hear UFC women’s flyweight champion Valentina Shevchenko had to go under the knife last week. Wishing her a speedy recovery. She told me Tuesday she’ll be ready to return to action in August or September. … Kudos to Conor McGregor for being a positive influence during these times. He has done a great job.

Looking for a classic fight to watch from back in the day? Go find Matt Hughes vs. Frank Trigg 2 from UFC 52 in 2005. One of the wildest endings ever, and a fight that UFC president Dana White has long said is his favorite fight of all time.

Hope you’re all hanging in there and enjoying the content over the past week. Until next time.