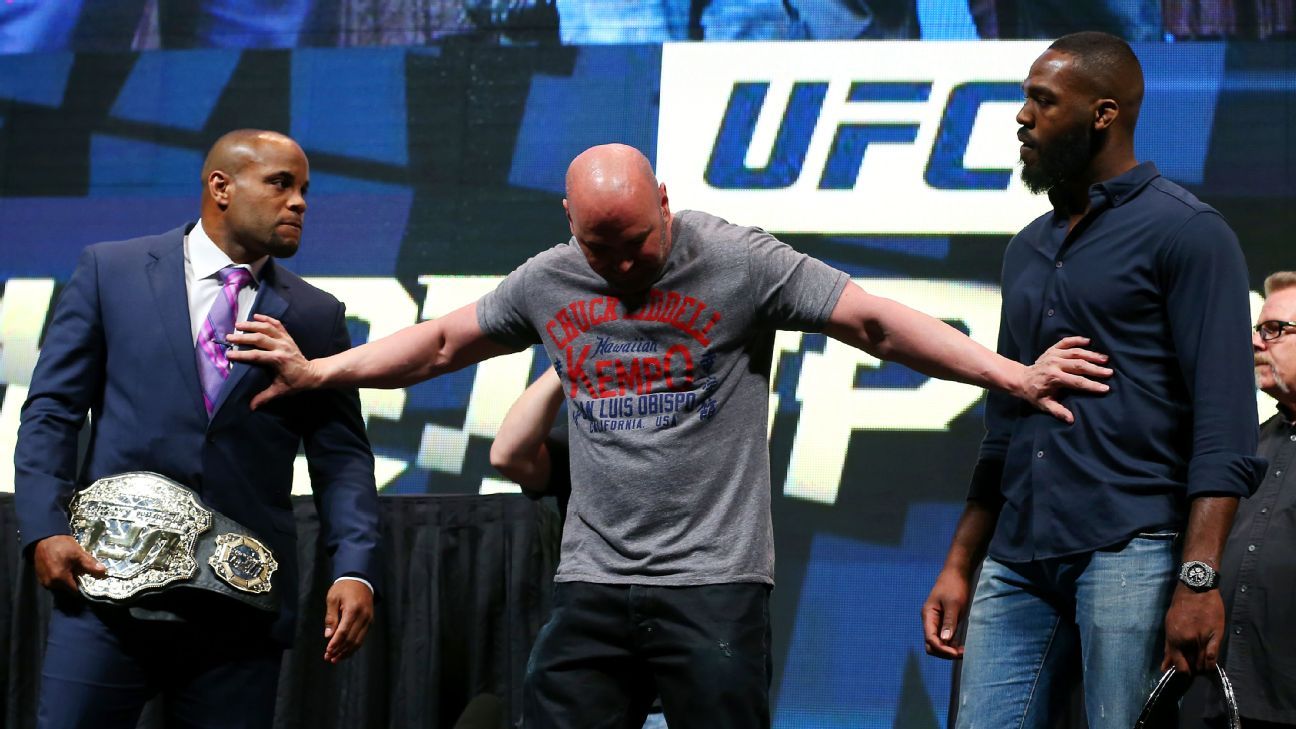 The latest episode of Ariel Helwani’s MMA Show on Monday featured a dominant UFC champion, multiple top trainers and prospects as well as one of the greatest pound-for-pound fighters ever.

Cormier is only open to Jones trilogy after Miocic bout

UFC heavyweight champion Daniel Cormier, who fights former titleholder Stipe Miocic in the main event of UFC 241, said he is comfortable leaving mixed martial arts after Saturday’s bout. The matchup is a rematch from a July 2018 fight in which Cormier knocked out Miocic in the first round.

“This fight can be the last fight,” Cormier said on Ariel Helwani’s MMA Show. “I’ll win the fight this weekend and see what happens. The reality is, if I have to walk away from this thing after Saturday, I’m OK with it.

“I’ve accomplished so much. My family is excited with the prospects of me being around more. The other side looks good, too. But right now I have to be focused for this weekend.”

UFC 241 features a heavyweight championship rematch and the return of one of the most popular stars in the UFC. Daniel Cormier will defend his title against Stipe Miocic, while Nate Diaz fights for the first time in three years, taking on Anthony Pettis.

Cormier, 40, most recently defeated Derrick Lewis by second-round submission at UFC 230 last November. He initially planned to walk away from the sport by the time of his 40th birthday in March, but decided to continue on a while longer.

Some believe part of the reason is he’s holding out for a trilogy fight with Jon Jones, Cormier’s biggest rival. They have competed twice before. In the first matchup, at UFC 182 in 2015, Jones won by unanimous decision. They fought again at UFC 214 in 2017, and it ended in a head-kick knockout by Jones. The result was later overturned to no contest after Jones tested positive for the banned substance turinabol. Cormier was reinstated as light heavyweight champion.

Asked about a possible third fight with Jones, Cormier said, “The ball is in my court now. I get to decide whether I want to fight Jon Jones or I let him continue to fight guys like Thiago Santos and Corey Anderson. Ultimately, for him to make the big bucks, we have to fight each other.”

Cormier added that if this bout were to happen, it would have to be light heavyweight so he could “make right what was wrong initially.”

Cormier said it is Jones or nobody. “It’s only big fights for me,” he said. “It’ll be Stipe Miocic and, if I fight again, it’ll be Jones. It’s not going to be anybody else.”

I feel like the move is inevitable but as of right now, Im dominating fights and making weight just fine. Daniels and I not reverie, but beef started at the light heavyweight division and that’s where it should end.(even though I could’ve sworn I ended this once or twice already)

Despite what he says to the media, I will guarantee you guys there will be no third fight. No way will he lose that weight again, no way will he be willing to reface those nightmares that comes when facing the beast.

Shevchenko on Cejudo’s challenge: ‘Be careful what you wish for’

Henry Cejudo is a UFC champion at both bantamweight and flyweight and — not sure if you know this — also an Olympic gold medalist. But he’s not done in his pursuit of gold. Cejudo took to social media over the weekend to playfully call out UFC women’s flyweight titleholder Valentina Shevchenko for a hypothetical “intergender championship” bout.

The following is a public service announcement for the supposed flyweight queen Valentina Shevchenko. Signed, Triple C and soon to be The IGC. #bendtheknee @BulletValentina pic.twitter.com/kUQbCnmIWd

Valentina Shevchenko says she is not afraid of anyone and would actually fight Henry Cejudo in the Octagon.

UFC strawweight contender Michelle Waterson has arguably the biggest fight of her career on Oct. 12 in Tampa, Florida, when she takes on former champion Joanna Jedrzejczyk. A win could propel her to a title fight with either champion Jessica Andrade or Zhang Weili, who compete at the end of August.Her biggest inspiration? Her father-in-law, who was recently in a car accident and initailly told he would never walk again.

Michelle Waterson shares the emotional story of her father-in-law’s car accident and the miraculous recovery he continues to make.

Anthony Pettis flat-out does not like Nate Diaz. The former UFC welterweight champion spoke with Ariel Helwani earlier this summer and did not hold back on why this fight was important to him.

“I can’t wait to hurt this guy. This is a personal fight for me,” Pettis said. “This is one guy I just don’t like. Me and Diaz got problems. Now we can solve them.”

Pettis’ coach, Duke Roufus, joined the show on Monday and described what he called “the best training camp of our career.”

Anthony Pettis’ coach Duke Roufus says Pettis has had the best training camp he’s ever had in his career ahead of fighting Nate Diaz. Watch the rematch at UFC 241 here on ESPN+ https://plus.espn.com/ufc/ppv.

Eric Albarracin knows a little something about champions. He coaches Henry Cejudo, the UFC champion at both flyweight and bantamweight. He coaches Patricio “Pitbull” Freire, the Bellator champion at featherweight and lightweight. And he coaches Paulo Costa (12-0), whose fight against Yoel Romero (13-3) on Saturday is, to Albarracin, a championship fight.

“In my eyes, Yoel already won the world title,” he told Helwani. “I think he is the world champion. I think he won that last fight. You know, three knockdowns.”

Albarracin is referring to Romero’s June 2018 bout with UFC middleweight champ Robert Whittaker, which Whittaker won by split decision. It was not a title bout, though, because Romero missed weight.

“I think he is the best 185-pounder that Paulo can fight right now,” said Albarracin. “I’ve been treating this like a world title fight.”

ONE Championship fighter Demetrious Johnson, arguably the greatest pound-for-pound fighter ever, defended his UFC flyweight belt 11 consecutive times before Henry Cejudo upset the longtime champion in August 2018. The two had fought once prior, a first-round TKO win for Johnson in 2016.

With the matchup at one win apiece, will we see a trilogy take place down the road? “Mighty Mouse” isn’t super interested.

“I’m focused on bigger things,” Johnson said. “Trying to capture my first-ever World Grand Prix and get a belt. Then go off and win another belt in a totally different organization.”

Demetrious Johnson tells Ariel Helwani he isn’t worried about a third fight vs. Henry Cejudo and is focusing on winning the ONE Championship Flyweight World Grand Prix.

Darren Till describes jail time in one word: ‘grim’

Former UFC welterweight title challenger Darren Till and several friends were arrested and fined in April for trashing a hotel room and stealing a taxi in the Canary Islands. Before their day in court, they spent four days in a jail cell.

What was that experience like? We’ll let him explain.

Darren Till tells the wild story of when he was jailed for four days after fire extinguishers were set off in his hotel.