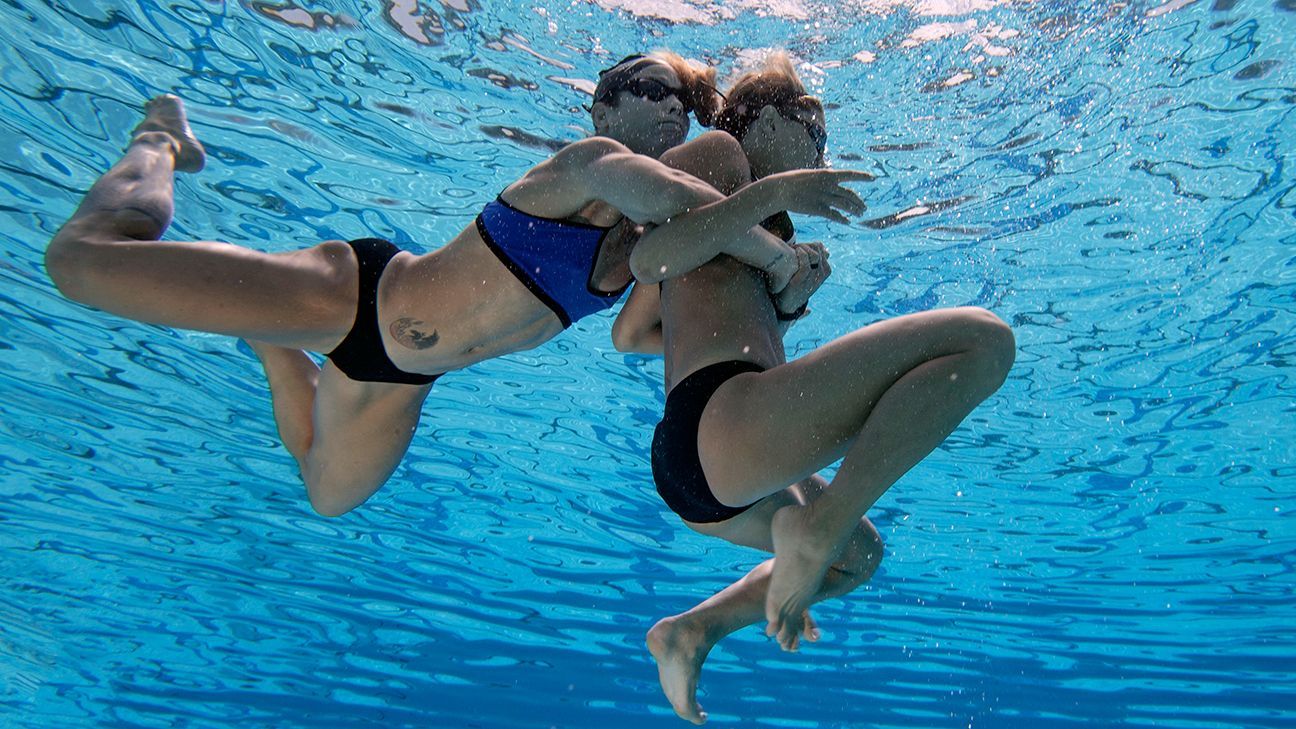 SAN DIEGO — LIZ Carmouche sat in her truck for 30 minutes, frustrated. She was physically and emotionally drained.

Carmouche’s MMA teammate Ilima-Lei Macfarlane had invited her to do underwater training, a program called Deep End Fitness, last November. Carmouche, while an exceptional athlete and veteran of the U.S. Marine Corps, had never been much of a swimmer. She didn’t even know how to float or tread water in the pool.

But she attended the session in Oceanside, California, anyway. It was a chance to learn something new, and she had seen Macfarlane’s improved cardio and confidence firsthand training at San Diego Combat Academy.

“The last thing I was gonna do was embarrass Ilima and not put out and not give everything I have,” Carmouche said. “That’s just not in my nature. So I was like, ‘yeah, I’m gonna have to drown today, but that’s OK.’ They’re all CPR certified. I’m confident they’ll bring me back to life.”

Carmouche described her first Deep End Fitness practice as “embarrassing” and “pathetic.” Still, she tried her hardest. And she wasn’t about to give up.

Nine months later, Carmouche is one of the standout athletes in the program, according to co-founder Prime Hall. She even became a certified instructor with Macfarlane in April.

Now comes the hard part. She’s entering the deep end again, but this time it’s not just to challenge herself. Carmouche is facing UFC flyweight champ Valentina Shevchenko on Saturday in Montevideo, Uruguay, and she’ll enter the Octagon as a massive +750 underdog.

Carmouche beat Shevchenko in 2010 — before either was in the UFC — when a cut caused a doctor to stop the fight. But these are different times. ESPN’s MMA team considers Shevchenko the UFC’s most untouchable champion.

Carmouche, 35, is hoping her unique training will provide an edge. If nothing else, she has proven to herself in the pool that she not only accepts fierce challenges, she also conquers them.

“If I can do all these activities – dumbbell carries with underwater crossovers, having to swim underneath the pool for 50 meters, do dolphin kicks for 50 meters, grapple underwater – without rest, without air, without oxygen and my muscles still being able to function at a high level, what will I be able to do with oxygen in the cage?” Carmouche said.

Sitting in her truck for that half hour in the parking lot after the first session, Carmouche was sullen. She also was motivated. She wanted to double-down.

“For me, if there’s something that I don’t succeed at, I’m not doing well, then I absolutely have to go back until I feel like I’m confident with it,” Carmouche said. “I was hooked.”

HALL, CARMOUCHE AND MACFARLANE utilize an intense training regimen they developed for MMA fighters at Deep End Fitness, and it has been a big part of Carmouche’s training camp for Shevchenko. She goes twice a week to supplement her MMA training and strength and conditioning.

The Wednesday sessions, Hall said, are for “mental focus.” They involve breath holding, warming up the lungs and bob drills, meaning floating up and down in the pool with your arms behind your back.

There is also a game element. The sister program to Deep End Fitness is Underwater Torpedo League, which is a combination of soccer, rugby and grappling underwater. Carmouche takes part in two-on-one drills underwater as she tries to score goals with a rubber torpedo against two defenders.

The Saturday sessions consist of exercises that keep Carmouche’s body at nearly full fatigue without going over the edge. Carmouche will do five, five-minute rounds in the pool to emulate a championship MMA fight. In the first round, she dives under, grabs two 50-pound dumbbells and runs them 25 meters across the pool to the other side. She comes up to get air for 15 seconds, goes back down and runs the dumbbells across the bottom of the pool.

“She’s just trying to keep herself at failure,” said Hall, referring to the point at which a person cannot do another repetition. “Just trying to run it as hard as she can for five minutes.”

Hall said Carmouche devised her own plan in June and has increased its toughness. Carmouche can now do six, six-minute rounds of the same exercises.

“She’s like a unicorn-type person that just grinds at a very, very high Olympic-athlete-type way,” said Hall, a former Marine Raider. “We train all kinds of athletes and she’s the one that sticks out most in my mind of someone who literally pushes their body, pushes themselves absolutely as far as they can. It doesn’t matter who is watching or if anyone is watching.”

Carmouche said she struggled to hold her breath underwater for 15 seconds at the beginning. Now, her personal record is two minutes and eight seconds.

That’s a long time, and a long distance from that parking lot.

MACFARLANE IS THE Bellator flyweight champ, and she understands the benefits of underwater training better than most.

“You see a lot of fighters hitting a rut, kind of. Kind of falling out of love with the sport. And when I started doing Deep End Fitness, honestly I hadn’t been as excited about anything since when I first started doing jiu-jitsu.”

“Being able to hold your breath underwater and staying calm and then being tired is so similar [to MMA],” Yoder said. “Because you’re in that position. If you’re in a fight with someone and you can’t breathe, you’re scared out of your f—ing mind. So, as different as they are, they’re so similar in training being so mental, training your mind to relax.”

Hall said water confidence is a major part of the program, and that it can extend into precarious positions into MMA. Carmouche said she has already noticed a difference when she’s doing jiu-jitsu training.

“I’ve definitely been in elements of grappling where I’m tied up and in a weird position and my mouth and my nose are covered and I can’t breathe,” Carmouche said. “You still have to be able to escape. The last thing you want to do is tap in that scenario when you have an opportunity to escape.

“What [underwater training has] done is given me the confidence and the capability. Yes, my mouth and nose are covered, but I can still get out of this. Whereas before, it was like, ‘I’m tapping, I’m done, I can’t breathe.'”

All of this is a far cry from where Carmouche was just nine months ago. She couldn’t float, couldn’t hold her breath underwater for any significant amount of time and was just glad the instructors had CPR training. Carmouche, who famously fought Ronda Rousey in the UFC’s first-ever women’s fight in February 2013, believes she has revitalized her career by training underwater. Even after that arduous first session, she never considered not going back.

“I’m that person, if I’m not good at it, that means I have to go back and master it,” Carmouche said. “I’m not satisfied with walking away from something and letting it beat me. That’s not my spirit.”