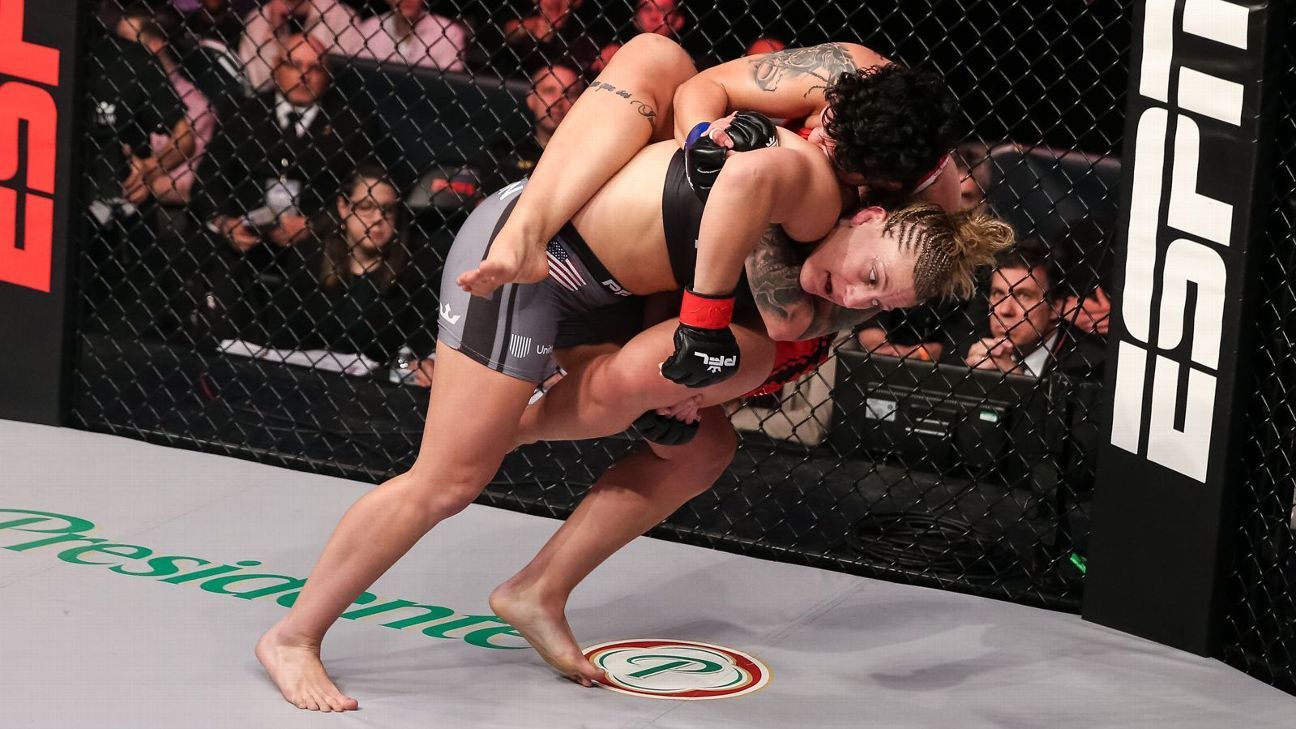 New Year’s Eve is drawing near and the second PFL finals will take center stage at the Hulu Theater in New York City where 12 fighters will vie for six $1 million prizes. Jeff Wagenheim, Brett Okamoto and Marc Raimondi break down each of the six matchups, including a major last-minute change.

Featherweight: No. 1 Lance Palmer vs. No. 4 Alex Gilpin

Palmer will face Gilpin with $1 million on the line. Gilpin is the same man Palmer defeated by unanimous decision in the semifinals Oct. 17. He is also the same man Palmer beat by unanimous decision on May 23 in his opening fight of the PFL season. Palmer vs. Gilpin 3 is the first time in major MMA that two men will meet three times in a single calendar year. It’s the first trilogy in the two-year history of the PFL, and the 222 days between the first and third fight dwarfs the UFC record of 517 days, which belongs to Andrei Arlovski and Tim Sylvia. This is actually Palmer’s second trilogy fight of the year, the first coming against Alexandre Almeida in his PFL quarterfinal playoff bout.

Gilpin (14-3) is being slotted into the finals despite the semifinals loss due to Daniel Pineda‘s failed drug test. The Nevada State Athletic Commission (NSAC) will hold a disciplinary hearing for Pineda in January, but he is suspended pending the results of that hearing. So, Gilpin, a 27-year-old from Wisconsin, gets the chance of a lifetime. No one knows Palmer better right now than he does — he has spent a half-hour in the cage with him just within the past seven months. Despite a clean 30-27 sweep in both fights, Gilpin’s late surge in the third round of the semifinals bout offers some hope of reversing his fortunes.

Can Palmer beat the same man three times in such a short amount of time? We’ll find out before the ball drops in Times Square.

Women’s lightweight: No. 2 Kayla Harrison vs. No. 4 Larissa Pacheco

Wagenheim: This is not the finale the PFL had been banking on all season, but it’s a fitting one. First of all, Pacheco earned her spot by beating up No. 1 seed Sarah Kaufman, who was finally exposed as a bantamweight in a lightweight’s domain. Who’s to say if Harrison would have done the same if a much-anticipated matchup with the UFC veteran had come to be? But the more important question now is not a hypothetical. It has to do with what’s real: Harrison vs. Pacheco, a rematch of the only fight this season Harrison did not finish in the first round.

You might remember the video clips of Harrison (8-0) having her arm raised on that night in May, a winner by unanimous decision, and then leaving the cage red-faced and sobbing. She was heartbroken by her performance. She expected so much more. And truth be told, there was and still is a lot of pressure on the two-time Olympic gold medalist in judo, who is the face of the PFL. But did that fight go the way it went because of Harrison’s failings, or is Pacheco (13-3) a serious threat?

The latter appears to be the case, based on how the lightweight semifinals played out. Of course, Kaufman was undersized, but she has experience on her side, having been in the cage with the likes of Valentina Shevchenko, Ronda Rousey and Miesha Tate. Harrison, by contrast, has the size to handle Pacheco — as we saw the first time — but little experience. Then again, she now has two more fights under her belt than she did going into her first meeting with the Brazil native. Pacheco beat up Kaufman everywhere, but against Harrison, she will need to keep the fight standing. Perhaps her three rounds in the cage with the Olympian five months ago taught her that. Likewise, Harrison has felt the power of Pacheco’s punches, so she knows where she has to take the fight. Who will get to do what she wants to do?

Light heavyweight: No. 1 Emiliano Sordi vs. No. 7 Jordan Johnson

Wagenheim: All season and through the playoffs thus far, Sordi has looked like the class of the light heavyweight division. Johnson, however, has a way of taking opponents out of their game plan and making them fight his way. He arrived for this season undefeated and fresh off of four UFC victories, giving him the best pedigree of anyone in the promotion. Then he proceeded to lose his first PFL fight. But Johnson has gone unbeaten since that point, and while his skill set seems limited to a strong wrestling game, he has found a way to make his fights play out in that world.

Sordi has shown himself to be fully capable of fighting his fight. He has found something — maybe just confidence, maybe something more. He went unbeaten in grabbing the top seed for the 2019 light heavyweight playoffs, and while other No. 1s faltered at that point, the 28-year-old Argentine continued to roll. He has finished all four of his opponents, between the regular season and playoffs.

During the playoffs, Sordi took out both of his opponents in the first round, finishing his quarterfinal by knockout in barely a minute, and then submitting Bozigit Ataev — the last man to beat him — in the semifinal. He is not simply winning, he’s doing it with poise and efficiency. If his momentum follows him to New York City, Sordi is going to be tough to stop.

Men’s lightweight: No. 1 Natan Schulte vs. No. 7 Loik Radzhabov

Okamoto: Who can beat Schulte? The answer is “no one,” at least over his past nine fights. And there’s a real possibility that Schulte already faced his toughest stylistic assignment in the semifinals, in Akhmed Aliev. Aliev is an unpredictable but technical and accurate striker with plenty of knockout power. He’s also well-rounded with a heavy top game.

Radzhabov showed a ton of confidence though, in his impressive semifinal win against Chris Wade. If nothing else, Wade will always test his opponent’s defensive grappling and mental will, and Radzhabov certainly rose to both of those challenges. He showed zero respect for anything Wade attempted in the playoffs, and it showed not only in the success he had, but his body language as well.

And as good as Schulte has been, undefeated in the PFL cage, he found himself in trouble more than once during October’s playoffs. Ramsey Nijem floored him with an overhand right and nearly submitted him in the quarterfinals. Aliev worked into side control in their semifinal bout, before ultimately going out to an arm triangle choke.

Radzhabov has a gas tank and, as he showed against Wade, competent takedown defense. He’s the kind of lightweight who is tough to slow down, once momentum is going his way. Schulte will be the favorite — and if he wins, he has to be considered one of the best fighters in PFL’s brief two-year existence. But Radzhabov has a shot, based on what we saw the last time he stepped into the cage.

Welterweight: No. 5 David Michaud vs. No. 6 Ray Cooper III

Wagenheim: The 2019 PFL season is one fight away from ending a whole lot better for Michaud than it started. In May, he made his PFL debut against Sadibou Sy, and he didn’t get much time to make a good impression. Sy knocked him out with a body kick in just 17 seconds. But then Michaud earned a playoff spot by scoring a first-round KO of his own, and in both of his fights in the playoffs, he showed off his well-roundedness and the discipline to stick to what is working.

Against the explosive Cooper, he is going to have to control distance and find safe entry points to make it a rugged clinch and grappling battle. He’s going to have to wear down Cooper, and take some of the oomph off of those power punches. That will test how well-rounded and disciplined Michaud (18-5) truly is.

Cooper (20-7), who lost in last year’s final to Magomed Magomedkerimov, had been aiming for a rematch with the Dagestani fighter, but that matchup fell apart when Magomedkerimov became sick after his quarterfinal victory. Cooper adjusted well to a change of opponent and the letdown that comes with learning that a shot at revenge isn’t coming after all. The prospect of a cool $1 million payday can soothe feelings like that in a hurry.

Cooper showed poise and maturity in both of his playoff fights. That’s a good sign for a guy who sometimes, in the past, has been a wild man in the cage, for better or worse. If this disciplined approach carries over to Dec. 31, Cooper is going to be a handful.

Heavyweight: No. 5 Ali Isaev vs. No. 7 Jared Rosholt

Wagenheim: Rosholt is all wrestler — the winningest heavyweight in the history of the fine program at Oklahoma State. But he’s no Olympian, and Isaev represented Azerbaijan in the 2008 Games. And Isaev is not all wrestling. He is capable of spinning attacks on his feet, and he has power in his hands, as he displayed in his last-second KO of top-seeded Denis Goltsov in his semifinal fight. He’s dangerous anywhere the action plays out in the cage, and he has what it takes to make the fight play out where he wants it to.

Isaev has only eight pro fights, and inexperience could be to his detriment against a tricky opponent. But Rosholt is not that guy. He’s going to wrestle and wrestle some more, and Isaev has seen that his whole career. Rosholt is 33 and has said he could be done after these playoffs. Might he have one last hurrah in him on New Year’s Eve?

Rosholt has been in the cage with better fighters than the 35-year-old Isaev. He owns wins over UFC heavyweights Stefan Struve and Walt Harris, and has shared the cage with Derrick Lewis and Roy Nelson. But all of that was years ago. In the here and now, he could be in over his head against the powerful, well-rounded Isaev.