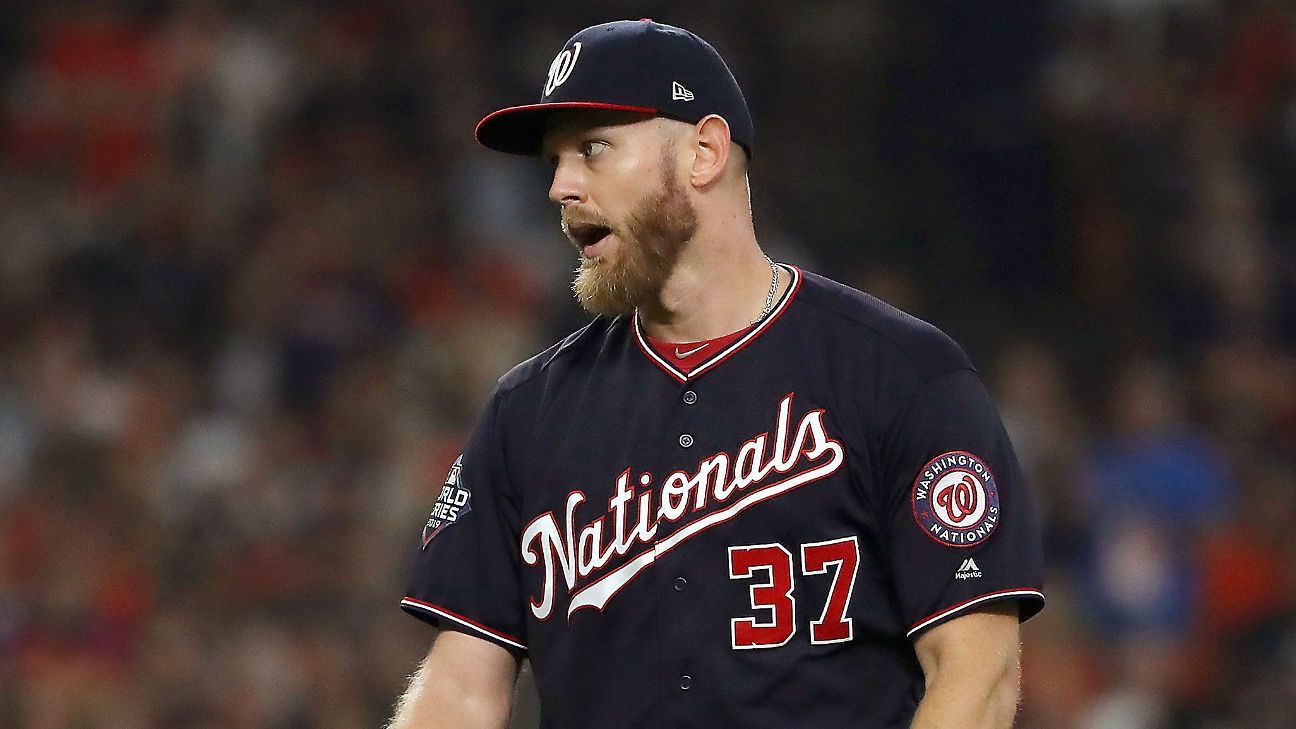 WASHINGTON — Naturally, Stephen Strasburg thought of himself pitching for a team other than the Nationals.

After winning and being MVP of the World Series, Strasburg opted out of his contract and hit the open market. The possibility was real that he’d played his last game in a Washington uniform.

Instead, Strasburg followed the lead of boyhood idol Tony Gwynn by signing a $245 million, seven-year deal that could allow him to play his entire career with the Nationals. This contract has no opt-outs, no options and a full no-trade clause. Strasburg will be 38 when it expires and could become just the eighth pitcher in major league history to spend 17-plus seasons with the same franchise.

“It’s really hard to come by in this game,” Strasburg said in his re-introduction to Washington Tuesday. “When you’re given an opportunity to be in one spot and grow as a person and a player, to be a part of an organization like this, you can’t really let those opportunities go by.

“It’s great for me to say that I am going to be a National for life.”

The Nationals put a focus on bringing back Strasburg, continuing their organizational model of prioritizing starting pitching over everything else. More than anything, they let it be know they wanted their homegrown star back. Strasburg was taken by the Nationals with the first pick in the 2009 draft.

“[General manager Mike Rizzo] kept in contact with me throughout, and I had the privilege obviously to talk with [owners] Ted and Mark [Lerner] about Stras’ situation,” said agent Scott Boras, who accompanied Strasburg and Rizzo to the podium. “We always had the dynamic as far as the organizational goals, and it was very clear that Stephen was a priority. … Those things are important for players to know.”

With Max Scherzer, who was in attendance Tuesday, and lefty Patrick Corbin under contract, the Nationals were positioned fine if Strasburg left. His $35 million average salary is a big jump from the contract he opted out of, and there was some uncertainty in Washington’s front office not knowing if it would be able to get something done with Strasburg.

“You play the ‘what if?’ game,” Rizzo said. “We had options A, B, C. You have to have multiple layers and multiple different ideas and opportunities and options to fall back on if you don’t get your primary target. It’s a little bit nerve-wracking, but we felt confident throughout the process that Stephen wanted to be here, we wanted him here and it was just kind of getting to the bottom line.”

The Nationals were not able to get to the same point with another Boras client, Anthony Rendon, who went from manning third base with the Nationals to signing a mirror-image (without deferrals) $245 million, seven-year contract with the Los Angeles Angels.

“For Anthony, what he did for this organization the way he played, I got all the respect for what he can do as a baseball player and wish him the best,” Scherzer said.

So the Nationals turn their attention to filling the void at third base. Rizzo confirmed interest in free agent Josh Donaldson, who spent last season with the Atlanta Braves.

“There’s a bunch of different ways to construct a roster,” Rizzo said. “We feel that we have great options both internally and in the free agent market and in the trade market, so we’ll explore those like we do every year and try and construct a team that Washington could be proud of and that gives us a chance to win another World Series.”

Replacing Rendon and filling the bullpen are the remaining offseason checklist items for Washington after bringing back Strasburg, NLCS MVP Howie Kendrick and catcher Yan Gomes. Soon, Strasburg and his teammates will take their talents to West Palm Beach, Florida, for spring training and try to do it all over again.

“It’s funny, you go win the World Series and everybody starts to write you off for next year,” Strasburg said. “I think that’s pouring gas on the fire for me and I think for a lot of other guys. There’s no stopping us now.”