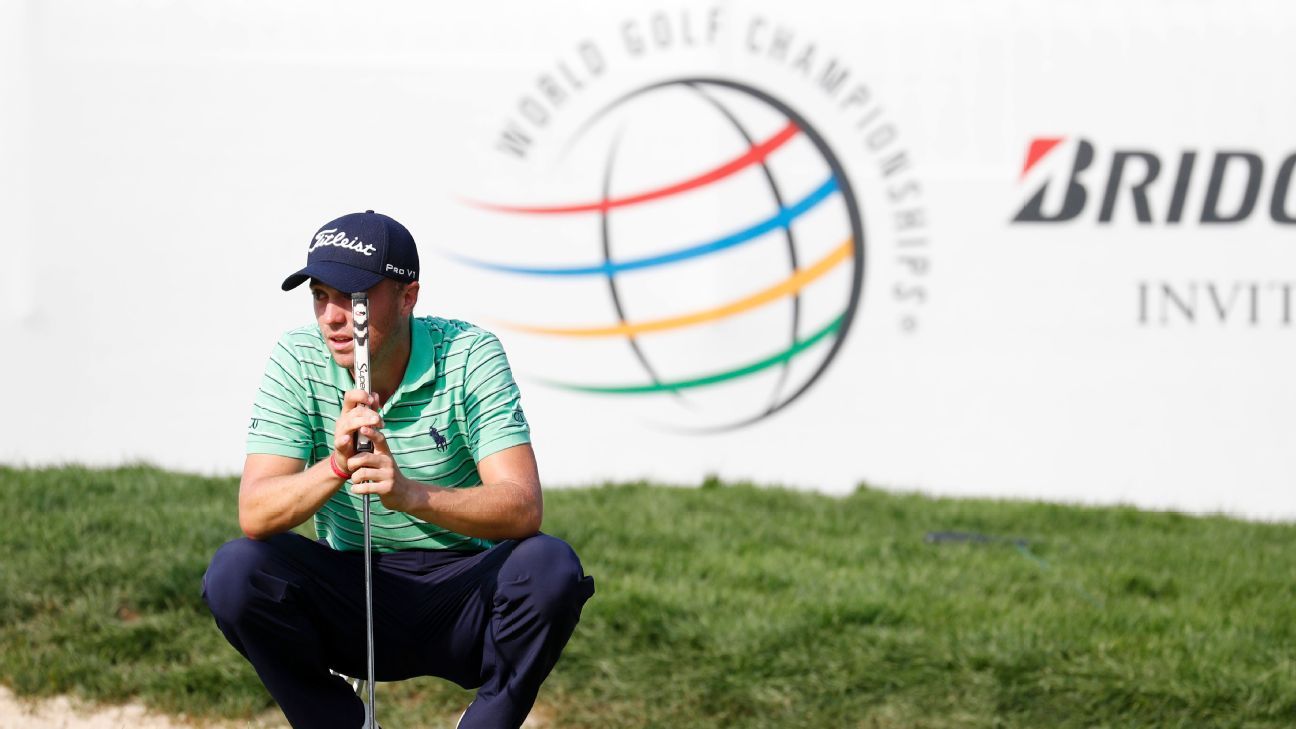 AKRON, Ohio — The last time Justin Thomas won a golf tournament, he was calling out rowdy spectators in the gallery and getting more attention for that controversial move than for capturing the Honda Classic.

That win was five months ago, not that big of a deal in the overall scheme of things but an eternity to a guy like Thomas, who was getting a bit antsy before closing the deal on Sunday at the WGC-Bridgestone Invitational.

A five-time winner during the 2017 season, Thomas, 25, was always going to have a tough time living up to that Player of the Year season. And heading into defense of his PGA Championship this week at Bellerive Country Club in St. Louis, it was bugging him.

“It’s been hard, too,” Thomas said of trying to temper expectations. “I mean, it feels like I haven’t won in forever.”

Of course, a four-shot win at Firestone and a first World Golf Championship victory will make that angst go away quickly. Thomas took care of that nagging victory question with a final-round 69 to easily win over Kyle Stanley while winning a PGA Tour event for the first time with his grandparents in attendance.

While there was some emotion involved, Thomas might also step back for some perspective.

All he needs to do is ask his good buddy, Jordan Spieth, what it has been like this year. Spieth has not won since the 2017 Open at Royal Birkdale.

And so while Spieth heads to Bellerive trying to complete the career Grand Slam, it is Thomas who takes a good bit of momentum, now having won three times this season to join No. 1-ranked Dustin Johnson and Bubba Watson as the only players to win that often.

Funny, that friendship/rivalry with Spieth — who tied for 60th and shot three rounds in the 70s this week.

Their relationship goes back more than a decade, back to junior golf days and at rival colleges, where each could hold their own share of bragging rights.

But Spieth clearly blossomed more quickly as a pro than Justin Thomas, who always praised his good buddy’s success through an amazing early run on the PGA Tour, including his third major title last year at The Open and into the PGA Championship where he was getting all the hype.

Spieth was gunning for the career Grand Slam and Thomas was … well, searching for his first major championship, which came with a final-round 68, as he overtook a few of the game’s other young stars in the process at Quail Hollow.

Now, three victories later, he has closed the gap on Spieth — 11 PGA Tour victories for Spieth, nine for Thomas. And since the start of 2017, Thomas has won seven times, had a brief time at No. 1 in the world, and now sits No. 2 to Johnson.

“I think what he learned is that he has to play his game and not force it,” said Thomas’ caddie, Jimmy Johnson, who has been working with Thomas for three years after a long stint with Steve Stricker. “Let the course come to him, and play a little smarter. He was trying too hard, maybe. I don’t think he was so much frustrated as he was trying too hard. He’s just letting his potential go through now.”

But his only top-10s since then were a tie for eighth at both the Memorial and the French Open. He was not a final-day factor at the Masters and U.S. Open and he missed the cut two weeks ago at The Open.

“I just want to have more chances to win tournaments,” he said. “I’ve had a lot of really solid finishes, a lot of top-10s, or a lot of top-15s, but a lot of those have been because of a pretty good last day, as opposed to having a chance to win. That’s what I’m out here for.

It is that kind of attitude that quickly drew Rory McIlroy to Thomas when he first came on tour a few years ago. They live near each other in South Florida, so they often practice and play together.

As it turned out, they were grouped in the final pairing Sunday, with McIlroy unable to make a charge and settling for a tie for sixth.

“I like J.T.’s attitude over everything else,” McIlroy said. “He’s got a nasty streak in him, which I think you need out here. He has that. When he gets himself in the hunt, you can see like a little twinkle in his eye and he really enjoys it.”

What made Sunday even better for Thomas was having his grandparents on hand. Both Thomas’ dad, Mike, and his grandfather, Paul, were PGA of America pros — and Paul Thomas played in the 1960 PGA Championship at Firestone. Paul and Phyllis Thomas live in the Louisville, Ky., and this is the first time they saw Justin win in person on the PGA Tour.

“It was pretty special,” he said. “I can’t put it into words, honestly. I saw my grandma and grandpa and just had to put my head down. I never have gotten like that on the golf course before. You just don’t know if they’re ever going to see me win if I don’t win here, so it was pretty cool to get it done.”