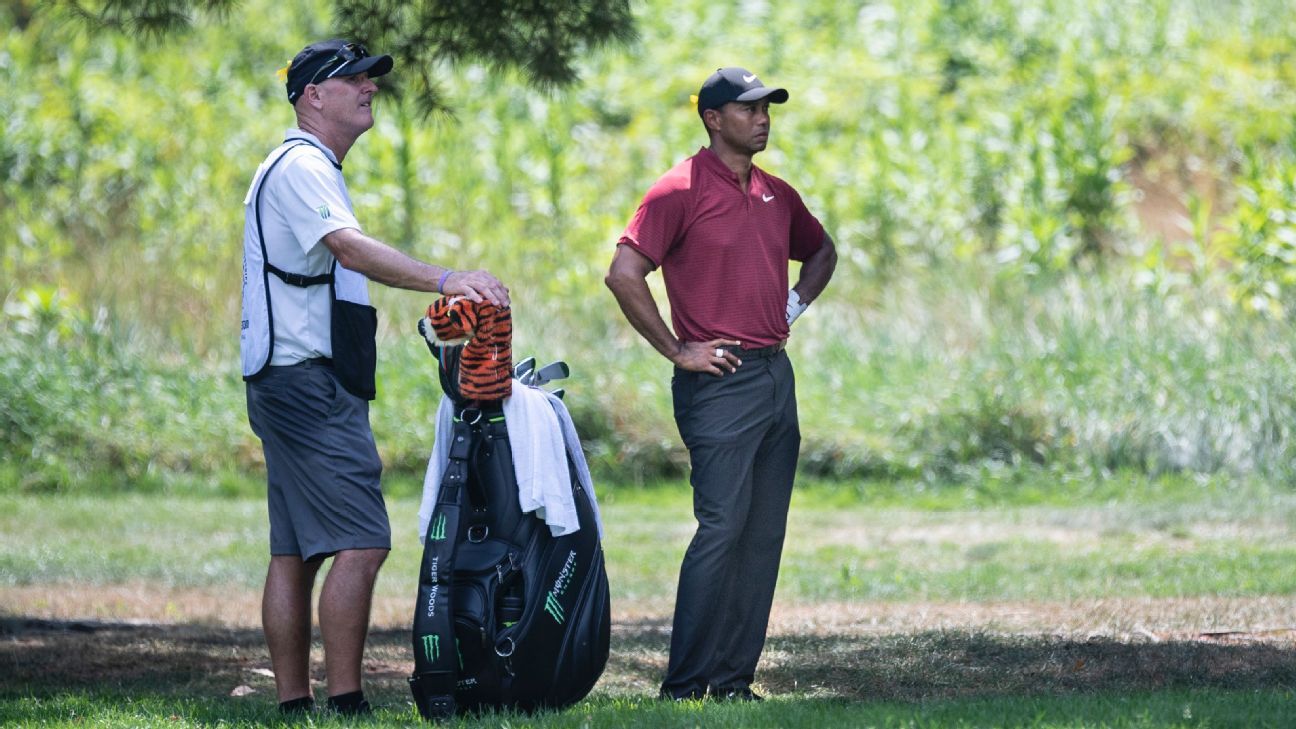 Not even 10 days ago, he held the lead in a major championship with eight holes to play before eventually tying for sixth, raising hopes that victory was imminent and making him a heavy favorite to win at Firestone, where he was an unexpected, last-second qualifier.

Today, he faces doubts about the PGA Championship at Bellerive Country Club because of a couple of lackluster 73s on the weekend, the possibility of a stiff lower back, reduced clubhead speed and a heavy upcoming schedule for which he might not have the physical fortitude to endure.

Dealing with all the noise would be more exhausting than playing five of six weeks — the current expected schedule — but Woods has always been good about shutting out such distractions and going about his business.

Woods seems less concerned about it than the rest of us.

“Sometimes it works out, sometimes it doesn’t,” Woods said Sunday after his disappointing tie for 31st at the WGC-Bridgestone Invitational, where he has won eight times but was not a factor on the weekend.

Woods appears at peace with his current predicament. Others, not so much.

At age 42 with a bad back, there will be dips in form and high scores and wayward drives. There will be rounds of 73 — just like Rory McIlroy, Rickie Fowler and Jason Day shot on Sunday. And there are likely to be more struggles than success.

The 14-time major champion has done plenty to raise expectations — six top-12 finishes, Sunday runs at the Valspar Championship and The Open and a scoring average of 69.678, which is 12th on the PGA Tour.

All of those things portend that Woods is “close” to winning again.

Then he has a poor weekend, in which he couldn’t find fairways at Firestone, looked tired, seemingly had a stiff lower back and wasted a good opportunity to earn FedEx points, world-ranking points and Ryder Cup points.

Couple that with his inability to close out several rounds this year or put together four solid rounds in a tournament and statistics that show his club speed has decreased and doubts arise.

“It happens,” he said Sunday. “I didn’t really play well at the U.S. Open. That was three tournaments ago. It is what it is, it happens. This week [at Bridgestone], I wasn’t as sharp as I needed to be, and I only putted well the first day. Got three more days to clean it up, and I’ll be ready come Thursday.”

Woods did not play Bellerive on Monday, choosing to get rest and perhaps some rehab. That leaves him just two days to prepare for a course that he has not seen since practicing for the 2001 American Express Invitational that was canceled due to the Sept. 11 terrorist attacks.

The amount of time he has to prepare is certainly not ideal, but Woods noted that he has to balance practice time with being prepared physically. A physical trainer accompanies him on every trip (although he was not at the Bridgestone) to help him prepare for each round. Although Woods rarely discusses what he goes through to get ready, you can bet there is a lengthy regiment he endures before he comes close to stepping onto a driving range.

“I want to play well and win tournaments through this,” Woods said when addressing his heavy schedule at the end of this season. “I feel like my body is good; I need to keep it that way. I need to train really hard and limit how much I do in practice, the wear and tear on the body, because I’m going to be putting it through its paces in tournament play.”

The PGA Championship will be Woods’ 14th tournament, the most he has played in any year since 2013. If he qualifies for the Tour Championship — he is 47th in the FedEx Cup standings and would need to be in the top 30 prior to the final FedEx playoff event — that would be 18, a total he has reached just once in the past 13 years. It would also mean a stretch of five events in six weeks.

It’s a lot of golf for a guy who a year ago at this time didn’t know if he would be playing anymore.

And yet, every swing, every round, every tournament is picked apart and chewed over, moods changing from swing to swing unlike any of the top players in the game.

There will undoubtedly be more of that this week in steamy St. Louis, given that it is the final major of the year.

Of course, a bit of perspective is in order, something Woods seems to have now more than at any other time.

As he said after the final round at Carnoustie: “Given where I was to where I’m at now, blessed.”

England Lions call up Essex seamer Sam Cook as injury cover
NBA Power Rankings: Second-half storylines for all 30 teams
China’s Zhang cleared to fly to U.S. ahead of fight
Burrow: Bengals have top pick, I have ‘leverage’
Wolves’ Towns out indefinitely due to injury