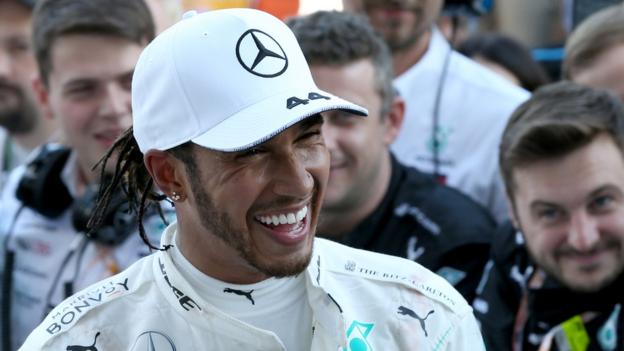 Mercedes say they are expecting a difficult time at this weekend’s Mexican Grand Prix as Lewis Hamilton seeks to tie up the drivers’ title.

Hamilton will secure a sixth world championship if he out-scores team-mate Valtteri Bottas by at least 14 points.

But that task will be made harder by the fact Mercedes do not expect the Mexico City track to suit their car.

“The four remaining races are not going to be easy and we expect Mexico to be the most difficult,” said Toto Wolff.

The Mercedes team boss added: “The high altitude of the track brings some fairly unusual challenges as the low air density affects the downforce of the car, the cooling and the engine performance.

“It’s a combination that doesn’t particularly suit our car, but we will give it everything to try and limit the damage.”

Hamilton has clinched his last two titles in Mexico but says he does not expect to be able to repeat the feat this year.

He is expecting the weekend to be dominated by Ferrari, whose straight-line speed advantage allied to improvements to their car has meant they have set pole position for the last five races, have won three of them and lost the other two only because of errors or bad luck.

Hamilton said after the Japanese Grand Prix: “Mexico is generally our worst race of the year because of the way our car is set up and it’s going to be a tough one for us. The last few have been pretty shocking, even though we’ve won the title there.

“I’m hoping for a better weekend but I think it’s going to be very hard to beat the Ferraris with those long straights.

“We have no hope of getting by on those straights, that’s for sure, but even if you look at the others, the McLarens are picking up some serious speeds on the straights, so are the Red Bulls so I think it will be a tricky one.

“I don’t anticipate it will be Mexico. I think we will be battling for a good few races.”

Ferrari team principal Mattia Binotto said: “After two races in which we could have done better, we arrive in Mexico determined to win. We will be aiming for our sixth consecutive pole, before looking to convert that into victory.”

Ferrari driver Sebastian Vettel, who took pole position in Japan before making a mistake at the start and losing the lead, said: “Racing at altitude has an impact on how the car feels. We are racing with maximum downforce level in terms of car set-up, but, since we are racing so high above sea level, the air is very thin and the cars actually produce very little downforce.

“On the long straight, I think we see the fastest top speeds of the season, which makes it difficult to manage the corners, because we’ve got so little downforce physically on the car.

“The car is moving around a lot and it’s difficult to get the tyres to work, in fact it’s hard to get the whole car to work and to get the right feel from it. It’s a relatively short lap but not an easy one.

“Over the past couple of years, we have been on an upward trend in Mexico, although Red Bull has been the team to beat. But I think the gaps between us are getting smaller, so let’s see how we get on this year.”