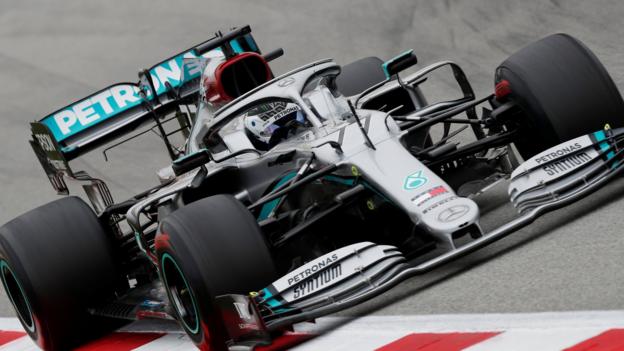 The Finn’s performance underlined impressions that the world champions are in strong shape ahead of the start of the new season in Australia next month.

But rivals Ferrari and Red Bull both showed pace on the final day, and Racing Point have impressed as well.

The Dutchman was running tyres one grade harder than the other drivers in the list of top five fastest times, with Renault’s Daniel Ricciardo third, ahead of Ferrari’s Charles Leclerc and Mercedes’ Lewis Hamilton.

And it appeared as if Verstappen could have gone faster still when he was on a quicker lap at the end of the day, but slowed down in the final part of the circuit.

On the final day of the second week of testing, no-one got close to the 1:15.732 lap Bottas managed a week ago at the end of the first week’s test.

Headline lap times in testing are notoriously unreliable guides to actual competitiveness because teams do not reveal the specifications in which they are running their cars, and fuel loads and engine settings can make a significant difference to performance.

After an unconvincing first five days of testing, Ferrari finally showed some pace, on both short runs and long, as Leclerc added a strong race-simulation run in the afternoon to his improved one-lap pace.

Hamilton said he was satisfied with his preparations for the season, but was concerned about the reliability problems with engines Mercedes had suffered.

“We’ve had a good winter test,” Hamilton said. “It’s not been perfect and we’ve found that we’ve got plenty of problems that we are trying to iron out. I don’t know how long it will take to iron out but that’s never a bad thing necessarily to discover them through testing.

“But otherwise I think our performance has been good in the sense of the amount of laps we’ve got, the mileage, and the actual processes and the things we’ve discovered along the way.

“I have no idea where we stand compared to others, the team will probably have a better idea than that. I don’t know where everybody else is.

“I think I understand the car well so I’m comfortable and confident in terms of getting in the car for Melbourne and knowing that I’ll be able to attack and extract the most from it but whether that’s going to be enough to be ahead of others, we’ll find out.”

Ferrari team principal Mattia Binotto reiterated his belief that they were behind main rivals Mercedes and Red Bull at this stage.

“We are certainly not the fastest car during winter testing,” Binotto said. “Our main competitors are faster but it is only the start of a long season. There will be time to address development where we are weak.”

How the home of US Open is transforming into a makeshift hospital
Jazz undergo layoffs amid coronavirus stoppage
F1 in very fragile state, says McLaren boss
The art of faking injuries in college football
My sporting hero: Callum Skinner on Michael Phelps