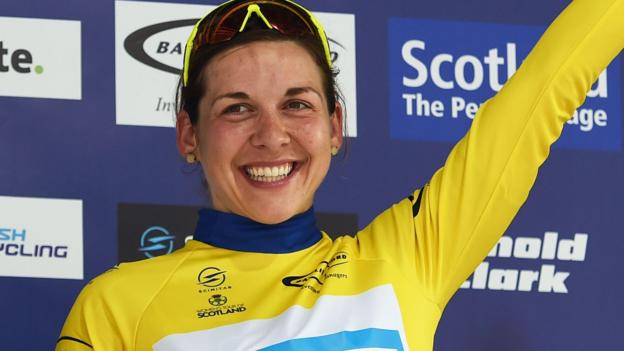 Alison Jackson won a sprint finish to claim the first-ever stage victory on the Women’s Tour of Scotland.

The Canadian Team Tibco-SVB rider clocked 3:24:37 to edge out America’s Emma White and Stine Borgli of Norway in a thrilling end to the 139.4km route from Glasgow to Perth.

Jen George finished as the best-placed Scot in 13th.

Friday’s opening stage, from Dundee to Dunfermline, of the inaugural race was abandoned because of bad weather.

“It was all just heart and desire and wanting to win for the team,” Jackson said. “It’s really exciting to have the first leader’s jersey in the first tour of Scotland. Tomorrow we’re going to try to win the day and keep the yellow jersey.”

The race ends on Sunday with a 118.3km stage three starting and finishing in Edinburgh via the Borders.

What just happened in the AFC? Barnwell on how the Ravens failed (and the Chiefs didn’t)
Mickelson sets goal to make Ryder Cup team
UFC 246 viewers guide: McGregor returns with big plans; can Cerrone cancel them all?
Player confidential: The truth about slow play in golf and how to fix it
Sources: Women’s event set for All-Star Weekend