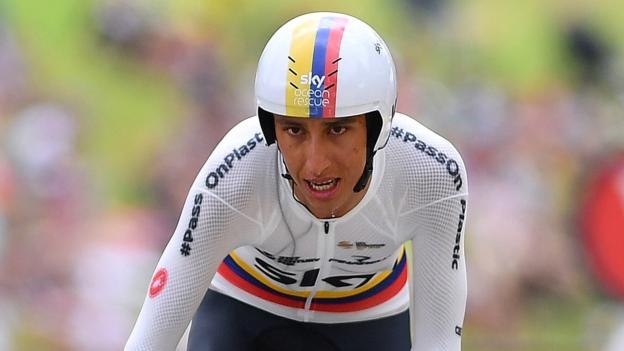 Team Sky rider Egan Bernal is out of hospital after suffering a “small bleed on the brain” following a crash in the Clasica San Sebastian on Saturday.

The Colombian, 21, was discharged on Monday after surgery to reduce a nasal fracture and repair a split top lip.

“[Egan] will continue to be closely monitored by our medical team and we will bring you updates as he continues his recovery,” said Team Sky in a statement.

“We would like to thank everyone who has sent Egan their best wishes over the past few days.”

The highly rated Bernal finished 15th in his maiden Tour de France in July and was a key support rider for champion Geraint Thomas and Chris Froome, who finished third.

Dimension Data’s Ben King was the first rider to go down in Saturday’s incident, bringing down several others behind him.

The American posted on social media to apologise for causing the crash, adding: “It’s terrible when something like this affects yourself but worse when it affects others – I hope everybody is OK.”

Movistar’s former Team Sky rider Mikel Landa, who finished seventh in the Tour, is also out of hospital after suffering a back injury in the crash.

The Spaniard sustained a “fracture to the spinous process of his lumbar vertebra” and will be out for two to three weeks, potentially keeping him out of the Vuelta a Espana, which begins on 25 August.

National tennis center to become medical facility
‘If you are too self-centred, you are looking for ways to get out’ – Virat Kohli
Recruiting dead period extended through May 31
PGA Tour approval for Tiger-Phil event on hold
The best of Texas, USC players and coaches live-tweeting 2006 Rose Bowl