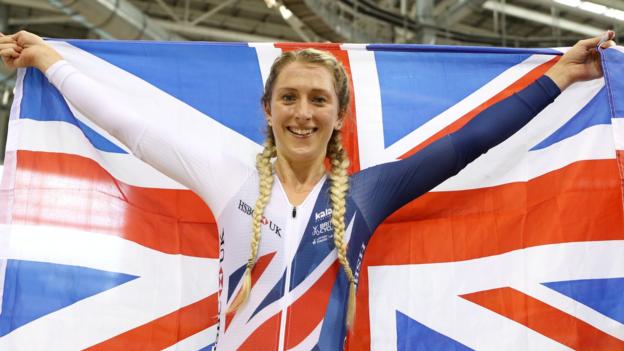 Britain’s Laura Kenny won her second gold medal of the European Championships in Glasgow with victory in the women’s elimination race.

“To be honest, I didn’t feel good out there,” she told BBC Sport.

“It was much faster at the beginning than I expected it to be. Before I came into it I wasn’t sure if I’d be able to do it because it’s been a year since I raced one of these and I was so nervous before it.

Kenny returned to racing earlier this year having taken time out after Rio 2016 to start a family with husband and fellow multiple Olympic champion Jason Kenny.

“I was thinking I didn’t want to leave Albie for nothing because he wasn’t very happy this morning,” she said.

“I’m glad I’ve got another medal to take home to him – and he needed another seal mascot because the dog got the last one.”

Kenny will go for a third gold medal on Tuesday when she teams up with Katie Archibald in the madison.

Archibald won team pursuit gold with Kenny on Friday, and took silver in the individual pursuit on Saturday.

‘She’s better than anyone else in the world’ – analysis

Laura Kenny loves the elimination race because it’s so unpredictable and so chaotic and she thrives on the chaos.

She rides this race better than anyone else in the world – male or female. She’s got a calm head, the tactics and the legs.

She’s still really on the comeback trail – she’s not really 100% yet – but this has been her best showing since Rio.

It will be exciting to see what she can do in the madison with Katie Archibald.

No road race medal for Rowe

With less than two laps to go, Commonwealth Games bronze medallist Rowe was one of a leading pack of three alongside Dutch Olympic champion Anna van der Breggen and Italy’s Elisa Longo Borghini.

But Rowe was quickly reeled in by the chasing peloton, and they closed down Van der Breggen and Borghini with 1km to go, before the race ended in a sprint finish.