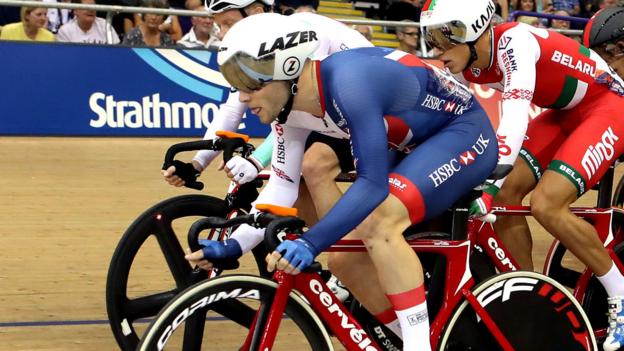 Britain’s Matthew Walls won gold in the men’s elimination race on the track at the European Championships in Glasgow.

Laura Kenny and Katie Archibald, who won five medals between them, were fourth in the madison, while Olympic and Commonwealth bronze medallist Katy Marchant finished fourth in the keirin.

Kenny triumphed in the elimination race and was in the victorious team pursuit quartet with Scot Archibald, who has also picked up silver medals in the individual pursuit and omnium.

However, Kenny admitted the British pair made mistakes in the madison and “should not have left it that late” to challenge for a medal in the final sprint.

“It’s the mistakes that count in the end, but it’s reassuring that I know we’re not on top form because if we can race like that and come fourth,” she told BBC Sport.

“We’re in a good place for the future. It should be an upward curve from here.”

Archibald added: “If you’re writing a fairytale maybe you don’t want to win now – we want to win in two years’ time. We’ve got a lot to work on before then.”

Walls, who has been making his senior major championship debut, said: “I was strong enough to lead from the front and that is what I did.

“It is a great competition and I’m just glad I got selected for it. It’s been a fantastic week.”

Britain’s tally of four golds, three silvers and three bronzes put them second overall in the track cycling medal table behind the Netherlands.