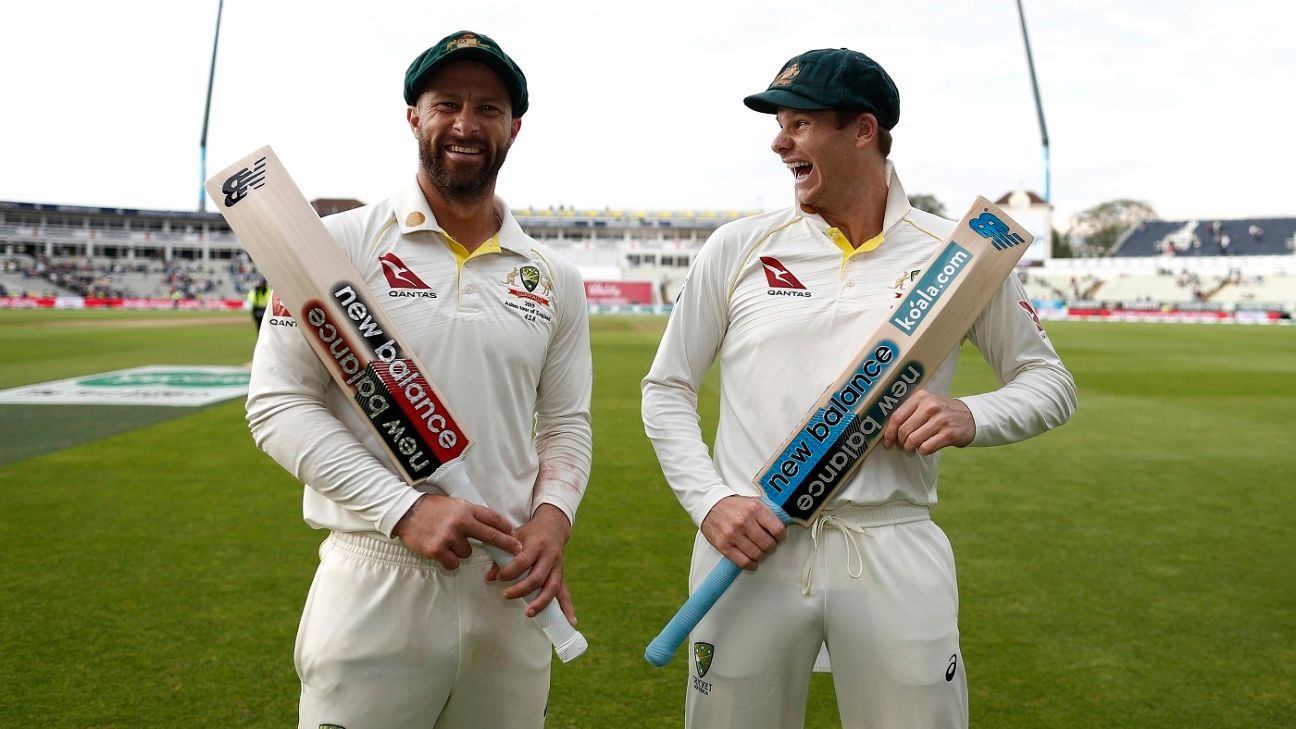 Behind all the talk and beneath the abrasive exterior, Matthew Wade hid a well of anxiety in each of his first 22 Test matches as a wicketkeeper-batsman.

It’s only in the aftermath of his 23rd, and first as a specialist with the bat, that Wade has been able to reveal the fact that, in reality, Edgbaston 2019 was the first Test in which he was able to actually enjoy himself – a sensation writ large across a second-innings century that played its part in setting up Australia’s resounding victory.

First chosen for Australia’s Test team a few months after his 24th birthday, Wade was in many ways seen as part of the new breed, selected by a set-up led by a captain and selector in Michael Clarke and a coach in Mickey Arthur, who were aggressively pursuing results in the wake of the Argus review the year before.

When he was chosen to keep wicket for Australia a second time, in late 2016, Wade’s was the selection of a desperate national panel, trying to find fighters after the loss of five consecutive Tests. Both these circumstances, while not altering the competitiveness instilled in Wade from his earliest days as a backyard cricket opponent of Tim Paine in the Hobart suburb of Lauderdale, certainly enhanced his feeling of needing to be striding, competing, fighting all the time.

“When I was batting out there [at Edgbaston], I was looking at the crowd and I was just enjoying being in the moment. I don’t think I’ve ever done that at Test level,” Wade told ESPNcricinfo. “I’ve probably been chasing the next game, chasing the next score, feeling anxious and feeling the pressure. But I really enjoyed the other day, it was cool to be back out in the middle of a Test match with a big crowd. It’s a little bit different to playing first-class cricket when there’s not too many people around.

“When I was batting out there [at Edgbaston], I was just enjoying being in the moment. I don’t think I’ve ever done that at Test level”

“When you’re a younger player you’re chasing every game, you’re chasing every tour, selection’s always on your mind and you think that’s the be-all and end-all, to be honest. You never want to be on the other side of being dropped – it’s a fear factor. I’ve been on that side and it’s not as bad as what you put in your mind. You get dropped, you go home, you go and play cricket, you make yourself better. I’m not scared of that anymore, and I’m really relaxed off field. So it’s been a cool two years to reinvent myself as a person and as a player.”

The reinvention had its roots in the circumstances around Wade being discarded from the national team in 2017, ironically for Paine’s return as part of that year’s home Ashes squad. He had spent much of his playing life trying to fit a model of player – the Adam Gilchrist-inspired batsman-keeper – that Australian cricket fervently desired, only to find diminishing returns the older he got.

Those who saw and were critical of some of Wade’s performances behind the stumps, notably his struggles at times to hold chances presented off Nathan Lyon, did not see the mental strain Wade experienced each time he tried to fulfil the role. At Edgbaston, able simply to run around the field and even bowl, Wade could not help but notice the difference.

“To go out and sing the anthem, to go out and play the first session, the first ball, they’re things I probably haven’t enjoyed in the past,” he said. “The anxiety of playing and the pressure and selection and doing your job is probably something you’re thinking about in those moments… and keeping, always thinking you’ve got to go out and keep.”

In winning his 2016 recall and then being dropped again the following year, a few months before the Newlands ball-tampering scandal engulfed Cricket Australia, Wade came to realise, too, that his reputation for abrasiveness and a football-inspired mentality were hindering him as much as it helped. Not least to be chosen in place of Peter Nevill at a time when his performances in first-class cricket were less of a point of difference than his vocal presence in the field.

“I probably wasn’t in my best form. At that stage they were after people who would compete and it’s just in my nature,” he said. “It doesn’t really matter what I’m doing – if I’m at home with my cousins playing basketball in the backyard, we’re a competitive family and we like to do things well and we like to win as much as we can. It’s just been bred into me.

“Perception is huge in cricket and I thought maybe my opportunity was going away slowly and that I’d been pigeonholed and I wasn’t going to get back in the Australian cricket team. But once you get to know me off ground, I’m a completely different person than what I am on ground. I think it takes people a little bit of time to know that, so I probably thought I wouldn’t be back here.”

But in that conclusion came a valuable move towards self-awareness. Irrespective of whether he would play for Australia again, Wade wanted to make the most of his life in the game and also the years beyond it. To that end, he committed to making the most of his batting talent, in particular, while also taking on a carpentry apprenticeship while building a new family home in Hobart – where he had moved back to in 2017 after a decade in Victoria.

“I’ve got an interest in property development when I finish,” he said. “It just so happens that we moved back and we were starting to build my house, so I jumped into it. It was the first winter I’d had off for probably eight years I think, so I wanted to do something different.

“I’ve always been driving to play for Australia but I think I made up my mind that I just wanted to be the best cricketer I could possibly be. I think every player, if you can do that at the end of your career, then hopefully you’ve played a long time for Australia. If you haven’t, as long as you’re getting the best out of yourself, then it doesn’t really matter what level it is.”

Much of the playing method Wade found was underpinned by close work with Tasmania’s batting coach Jeff Vaughan, who was a source of reassurance even after Wade’s brief first innings at Edgbaston, providing reminders that all their groundwork together, and the avalanche of runs for Tasmania, Hobart Hurricanes and Australia A that it reaped, would hold up in the Ashes. Come the second innings, Wade was far calmer than he might have been in earlier years.

“I didn’t get any runs in the first innings and I spoke to him [Vaughan] briefly a few times, backwards and forwards texts, just making sure that I was still trusting what I’ve done for two years and not running around in circles trying to change things,” Wade said. “It’s my defence and being able to leave the ball and make the bowlers come to me a little bit will help me score. I probably chased the game a little bit hard when I was a younger player and playing as a specialist batsman after you follow Gilchrist, the perception is that you’re going to be an attacking batsman.”

That evolution includes an acknowledgement that, while ostensibly the back-up gloveman on this Ashes tour in the event of an injury to Paine, Wade knows his final few years in the game will be primarily as a batsman. He is, at long last, completely comfortable to be playing that one, single role.

“I don’t think that I’ll keep very often in the longer format,” he said. “I’m comfortable if something happened [to Paine] I could jump in and keep in a game, that’s no problem at all. Probably, mentally, the pressure of not having to keep day to day to day in longer formats, you’re more relaxed in the mind, so you probably keep better anyway.

“I feel like I’m a different player, I almost feel like I’m starting my Test career again, but an Ashes hundred, it probably hasn’t sunk in, it’s definitely the best moment I’ve ever had as a cricketer. It’s nice to put all that work in and then get a little bit of reward. It was fun.”

Who could step in as Josh Taylor’s new head trainer?
Everything you need to know about MLB’s sign-stealing scandal
Saracens relegation threat intensifies
The Wysh List: Five essential traits of an NHL pest
NFL playoffs conference championship round: Biggest injury questions for all four teams