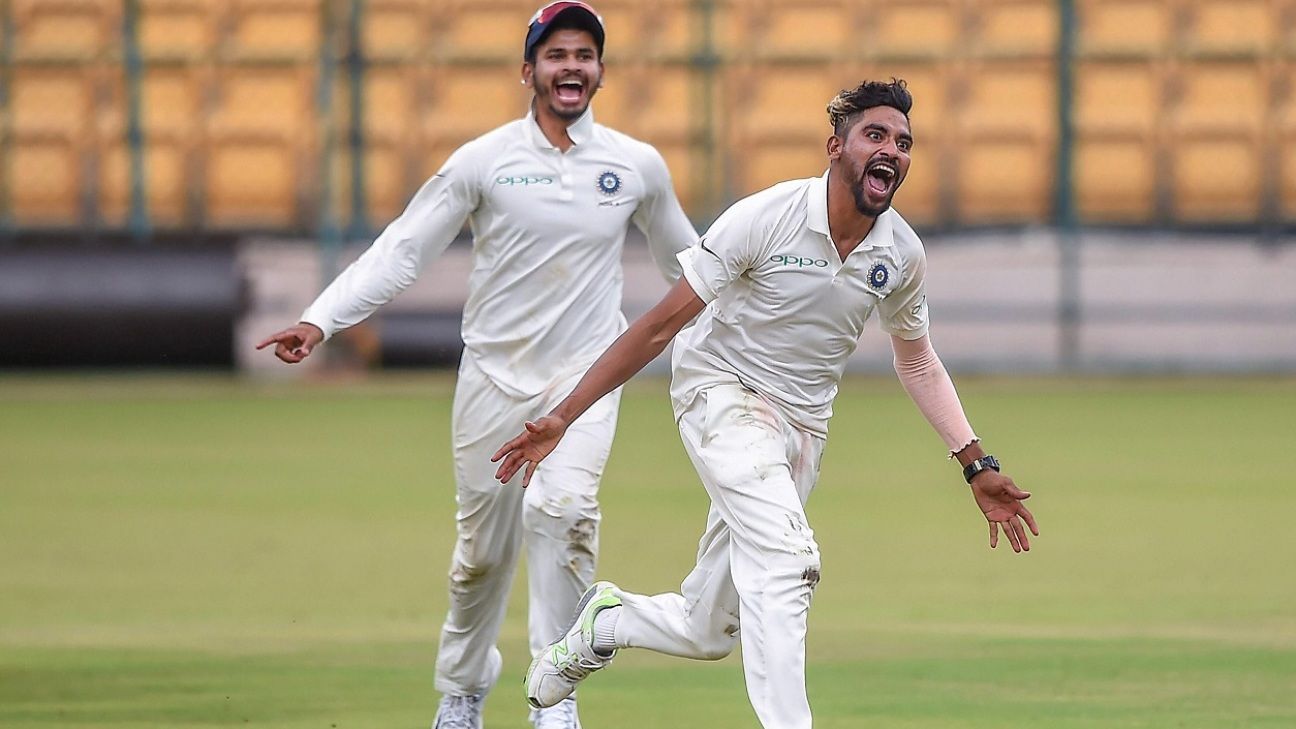 South Africa A wicketkeeper-batsman Rudi Second wore down India A’s attack for the second time in the game and threatened to hold them off to a draw amid fading light at the Chinnaswamy Stadium. But Mohammed Siraj‘s maiden first-class ten-wicket haul sewed up the hosts’ thrilling innings victory with 1.1 overs remaining on the final day.

Yuzvendra Chahal, who was playing his first red-ball match since the Ranji Trophy quarter-final against Jharkhand in 2016, bowled as many as nine front-foot no-balls in the game and struggled for rhythm, but he struck when it mattered, to nab Second and leave him six short of a hundred again.

“Chahal has had a lot of success in white-ball cricket,” India A coach Rahul Dravid said after the win. “Even for us, I have been seeing from two-and-half years, when he first came to South Africa, he wasn’t considered a red-ball player as such. But we wanted to give him opportunity to showcase how he does in red-ball cricket. It’s about what he can do in red-ball cricket and that’s really what A team is about. We are here to supplement and do what is best to make the national team stronger. We want to create good options for India team. Chahal, they [selectors] were very keen to know how he performs in red-ball cricket. The more he plays red-ball cricket, the more experience he gets.”

When the last hour began, South Africa A were 286 for 7 in 115 overs, still facing a deficit of 52. Soon, Chahal trapped Second with a slider to break the game open for India A. Malusi Siboto, Beuran Hendricks and No. 11 Duanne Olivier ate up 93 balls collectively and ticked down the overs, defending resolutely. However, Siraj, who had set the game up for India, fittingly returned to provide the coup de grace.

“Maturity is one thing [that stands out about Siraj],” Dravid said. The last three four-day games, in England and here has been terrific. To get 26 wickets in the last three games is terrific.

“He is someone who has played very less first-class matches. He hasn’t been really part of the system as he hasn’t played much junior cricket. So he is learning all the time. So even in white-ball cricket I won’t be too harsh on him too quickly because he hasn’t played that much, maybe a little bit of IPL, he had one good season and then he was in and out. It’s been great to give him the chance to perform. He has been bowling in much better areas and he has grown better physically.”

Such a tense finish did not appear as likely in the morning, when Vidarbha’s Rajneesh Gurbani had overnight batsman Zubayr Hamza jabbing a catch behind for 63. At that point, South Africa A were 121 for 5. The overnight rains in Bengaluru had juiced up a pitch that already provided seam movement and variable bounce to the bowlers. Siraj, Nitin Saini and Gurbani simply did their thing: throwing the bait outside off but the other South African batsmen showed greater restraint outside off.

Second, who displayed the tightest defensive technique among the South African batsmen, however, held nothing back against the loose balls. He cracked a Chahal full-toss through midwicket and then eased him through the covers.

While Chahal did turn some past the outside edge of Shaun von Berg, he could not find it. Whenever Chahal overpitched outside off, Second and von Berg leant into the drive and handsomely stroked the ball through the covers. Second also employed the flat, hard sweep effectively: the shot that brought him his fifty off 115 balls. Von Berg, who had conceded 107 in 20 overs with his legspin, had some joy with the bat and scored a fifty of his own.

All told, the Indian bowlers could not find a way past Second and von Berg for 50.4 overs. They even resorted to the short-ball attack but the two batsmen evaded them or comfortably fended them off. Von Berg is a fairly competent batsman with five first-class hundreds to his name, and he reminded everyone of that when he slapped Siraj on the up through the covers.

Gurbani then returned, after another spell of rain that had forced early tea, to have von Berg nicking off twice in two overs. While R Samarth dropped the first chance, a more difficult one diving to his left from slip, he pouched the second without any fuss at the same position. The reprieve cost India A nothing: von Berg’s innings ended on 50 off 175 balls, the sixth-wicket partnership on 119, the visitors’ only century stand in the match.

Second continued to give South Africa A hope of pulling off a coup, when he stretched forward and drilled a drive between Siraj and wide mid-on for four in the 109th over. However, seven overs later, Chahal, who had frequently erred in lines and lengths in the first two sessions, finally found his groove and bowled an accurate flat dart to leave Second and his team heartbroken.

The state of the heavyweight division is strong — and full of hope
McIlroy: ‘Freedom’ tops golf league’s big money
DeChambeau birdies way to 1-shot lead in Mexico
Kyrie replaces Pau as a VP of players’ union
The great American heavyweight is back. His name is Deontay Wilder