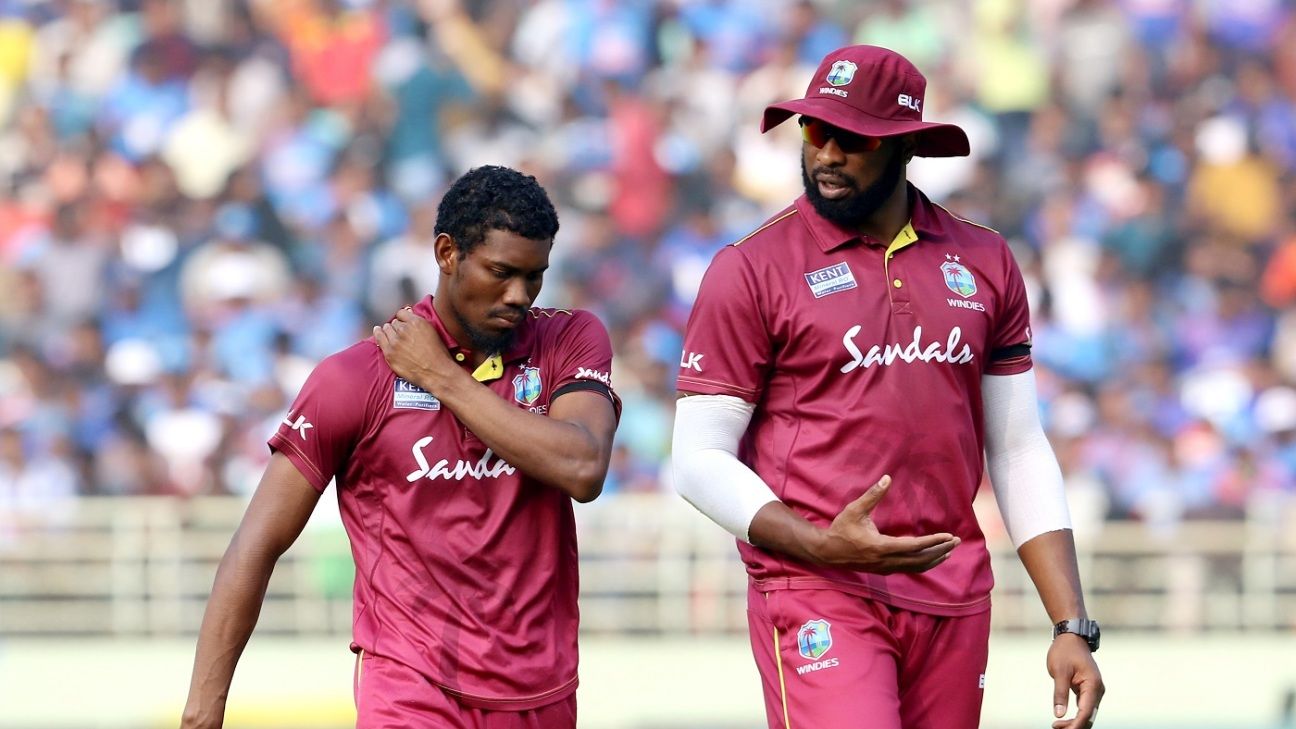 After KL Rahul and Rohit Sharma had given India a rousing start, West Indies’ bowlers tightened up and bowled 12 successive dot balls to Rohit. Fast bowler Alzarri Joseph found some seam movement and beat Rohit’s outside edge while debutant left-arm fingerspinner Khary Pierre attacked the stumps. The build-up of pressure resulted in a near run-out and then a top-edge from Rahul that landed in front of deep square leg.

West Indies, however, couldn’t sustain the pressure for long enough and India’s openers cranked up the tempo, with both Rohit and Rahul rattling off centuries. Rohit was in such crazy ball-striking form that he scooped the ball for six over extra cover, despite falling on the floor. Rahul also showed off his range, and even launched a low-flying helicopter shot. West Indies then had a brief opening when Joseph had Rahul carving a catch to third man for 102, in the 37th over. However, from thereon, West Indies ended up conceding 160 in their last 13 overs, including 127 in their last 10. There would be no way back for the visitors.

“The last 10 overs went for [so many] runs. And that’s where we lost the momentum in the entire game,” captain Kieron Pollard said at the post-match press conference. “Before that, we were neck and neck with them [India]. It was a good track, we knew it was a good track, and we didn’t really execute at the back end, which has been the storyline for us in terms of when we get a flat track when there isn’t much for the bowlers.”

Offspin-bowling allrounder Roston Chase had a bowl at the death, giving up four sixes and a four to Shreyas Iyer in a 31-run over. In contrast, Jason Holder, who had found extra bounce and swing in the early exchanges, and Joseph, who had found seam movement with the semi new-ball, didn’t finish their quota of ten overs. Sheldon Cottrell, who plucked the wicket of Rahul and Iyer, didn’t complete his quota either. However, the left-arm seamer was going at more than nine runs an over.

Pollard defended his decision of looking at other options in the slog overs, saying the frontline bowlers were also proving expensive.”At the end of the day, you make a decision, [and] you can talk about why they didn’t bowl. But, when they were [bowling], they were going for runs as well,” Pollard said. “Sometimes there are decisions you have to make at a certain point of time. Sometimes it works and sometimes it doesn’t. You crack on and look back as to where you could’ve done things different and you move on… It was a spur-of-the-moment decision. Cricket is a game of luck and chance. Sometimes it works, sometimes it doesn’t. A lot of guys haven’t bowled ten overs in this series. It’s going to happen in the series going forward. We have options and you see how it goes.”

“It is what it is,” Pollard said of the middle-order collapse. “It happened in a situation [when we were] in a good position and anytime when you lose wickets frequently, you’re on the back foot. Again, that’s one of the areas in the chase where we faltered and we accept that.”

Amid the faltering, wicketkeeper-opener Shai Hope and big-hitter Nicholas Pooran stood out. Hope posted his fourth fifty-plus score in five innings in India, the latest coming at a strike rate of 91.76 as opposed to a career strike rate of 74.19. Pooran was more brutal at the other end, shellacking 75 off 47 balls, including 41 from Ravindra Jadeja alone.

“There are some youngsters, some talented ones and they are exciting as well,” Pollard told host broadcaster Star Sports at the post-match presentation. “It’s just a matter of going out and expressing themselves. Shimron [Hetmyer] in the last game, Shai Hope has been consistent in the way he goes about his stuff, and Nicholas Pooran – you got a glimpse of him today. Again, it’s a matter of putting in the pieces of the puzzle together.”

Pollard backed his side to brush off this heavy defeat and bounce back in the decider, in Cuttack on December 22.

“We’re going to go back and try to go over the mistakes that we’ve made, try to correct it in terms of practice and again come out fighting like we’ve done throughout the series,” he said. “Nothing is going to change for us in terms of how we prepare, the guys have been really, really good when it comes to that. So, it’s just a matter of flying tomorrow and get back on the training pitch and trying to put on a show in three days’ time.”