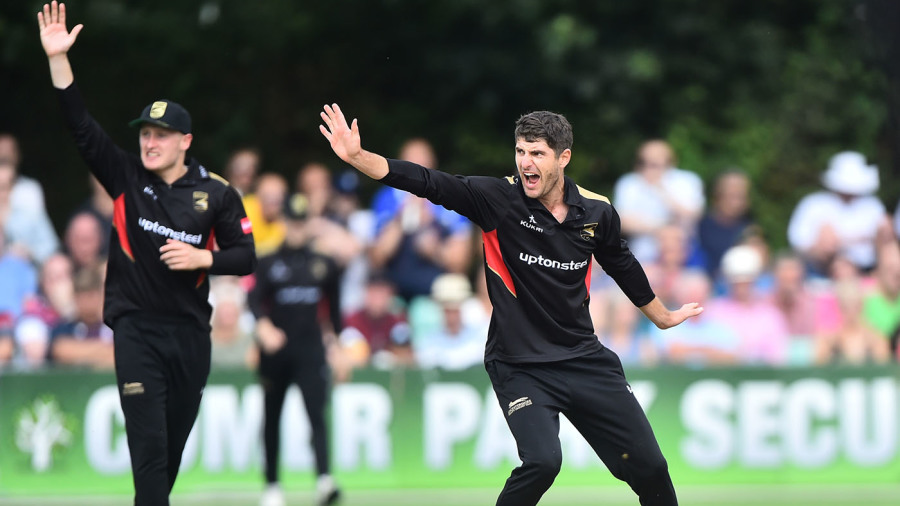 Colin Ackermann went into this match with 31 wickets in 90 T20 matches, a few gathered now and then in England and South Africa. Now he can add the best bowling figures in the worldwide history of Twenty20 cricket to his record. On an astounding night at Grace Road, he returned 7 for 18 in four overs against Birmingham Bears, looking upon the gifts bestowed upon him with a growing sense of wonderment.

More than 30 bowlers have taken six wickets in a T20 tie but nobody had ever taken seven. When he came on six overs from the end to bowl his third over, with only one wicket to his name, nothing could have been further from his mind. But Birmingham, still 72 short with six wickets intact, capitulated in extraordinary fashion to lose by 55 runs.

Ackermann, Leicestershire’s T20 captain, just planned to be a solid pro doing an intelligent job, but the naivety of a young Bears batting line-up was evident as he banged his off-breaks in short of a length in search of turn and bounce and reaped the benefit, taking three wickets in each of his last two overs. They failed to work him for singles; they flailed him to eager fielders in the deep. They could not have got it more wrong.

“I’d never have believed this in a million years – I count myself as a batting allrounder,” Ackermann said. “It was the first time it has turned at Grace Road so I tried to use my height and get a bit of bounce. Even if it turns a couple of centimetres it’s an advantage. I tried to get the batters to hit into the biggest part of the field into the wind and just mix my pace up a little.”

Leicestershire deserved such a night. They are the T20 side that will not lie down. Rank outsiders at the start of the Blast season, they have no high-profile overseas players to lift expectations and one of the most tranquil crowds in the country is not about to gain a mention on an ECB PowerPoint presentation about the future of T20 cricket. Yet rouse themselves they have, with Birmingham Bears the third county to come a cropper against them this summer.

By the time Birmingham’s innings crashed to a halt, they had moved from eighth to fourth in one night. Presumed to be no hopers at 6.30pm; in the quarter-final positions in the North Group less than three hours later. “I’m delighted because times are tough,” said their indefatigable coach, Paul Nixon.

Worcestershire, last year’s winners, Nottinghamshire and now Birmingham, all at sea as they faced Leicestershire’s 189 for 6, have now fallen to the Blast’s least-fancied side. Nixon experienced two Championships and three T20 triumphs within nine years as a player with Leicestershire and, even if the odds seemed more heavily stacked against them these days, such nights will fire his belief that anything is possible.

Ackermann’s first wicket might never have materialised. Michael Burgess was splendidly caught at short extra cover by Harry Dearden, only for the fielder’s obvious reluctance to claim the catch to cause the umpires to turn to TV replays with umpire David Millns even giving a soft signal of not out. Patently, the catch was clean and the first stage of a world-record night was reached.

Three wickets in Ackermann’s third over then confirmed Leicestershire’s victory after Birmingham had prepared the ground for an assault that never materialised with a third-wicket stand of 91 off 58 balls between Sam Hain and Adam Hose. Ackermann bowled Will Rhodes and Alex Thomson and held a return catch from Liam Banks, all of them attempting nothing more ambitious than trying to get Hain back on strike.

Then three more wickets in his final over: Hain’s 61 from 44 balls was a forlorn cause by the time he was caught at long-on. Henry Brookes charged through his own red mist and was bowled. Jeetan Patel, knowing the game was up, swung the last ball of Ackermann’s spell to long-on. Patel, a superior offspinner, who had bowled three overs for 42 on the same pitch, was gracious in his praise. “He asked the ball to do things,” he said.

From the moment that Ackermann replaced Paul Horton as Leicestershire’s one-day captain in May, Leicestershire’s accent has been on youth. That reaped dividends against Birmingham with the bat as Harry Swindells and Lewis Hill made maiden T20 half-centuries. Swindells’ 63 from 50 balls at the top of the innings was a spirited affair and Hill’s assault in the second half was even more profitable as he whacked 58 from 28.

It is not often that Patel, so often Birmingham’s matchwinner, fails to complete his spell, but that was the outcome as Hill dispatched him for 17 off four balls. He dealt well with Fidel Edwards’ pace, too, taking 26 from 10. A short ball from Brookes silenced him as he hauled a short ball to midwicket.

When Brookes yorked Dearden with his next ball, he belied his tender years with a show of satisfaction that was all jutting jaw and angular, don’t-mess-with-me strut. He had dropped Swindells on 37 at long off, off Rhodes, and every affronted delivery from then on sought retribution. He relied predominantly on a mix of short balls and yorkers and finished with 3 for 26.

Birmingham will need that spirit in the weeks ahead. They had suffered two injury blows on the day of the match, with England pace bowler Olly Stone ruled out with a recurrence of a back injury, quickly followed by confirmation that Australian spinner Ashton Agar would miss the remainder of the tournament after breaking an ankle at Headingley on Sunday.

Lamar struggles as Ravens shocked by Titans
How the Titans pulled the stunner to beat Lamar Jackson, and what’s next
Cavendish likely to miss out on Olympics place
Stone Cold Stunners, King Cobras and the People’s Elbow: Inside the Bucks’ pregame routine
Chiefs sound drained at mere prospect of facing Derrick Henry again