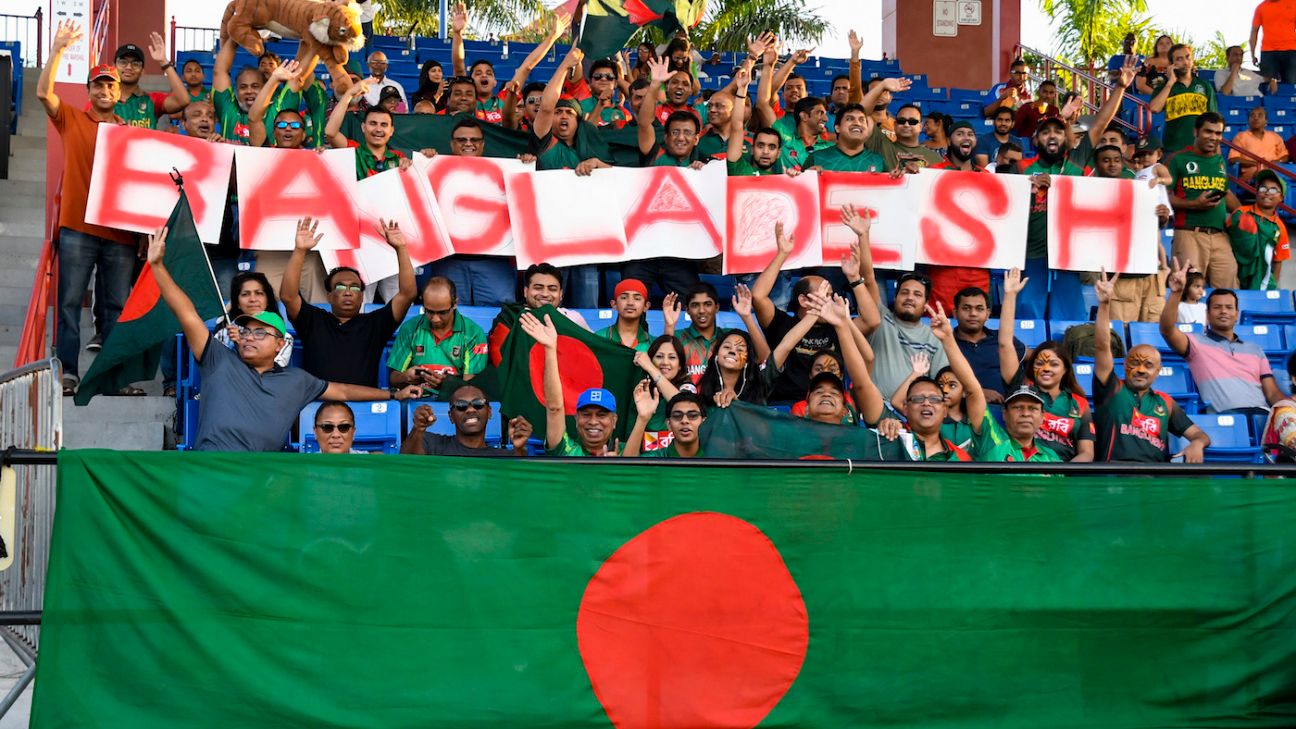 Not only were they 1-0 down after a series-opening loss in St Lucia, but Bangladesh were heading to a venue for the remaining matches where West Indies were not only undefeated but had recorded two of their three highest totals in the format: 209 for 2 against New Zealand in 2012, and 245 for 6 against India in August 2016.

A little after midnight on Sunday, Bangladesh etched a page in their own history books by completing a remarkable comeback courtesy of a Lauderhill sweep of West Indies to win the T20I series 2-1. With 2.5 overs to go in the match and West Indies well behind the par score in the chase, a second rain interruption occurred, but the majority of the overwhelmingly partisan Bangladesh crowd stayed back even after the match was called off. They were rewarded with a victory lap through the rain led by captain Shakib Al Hasan who paid tribute to the crowd for giving his squad an emotional lift in a series win.

“So many Bangladeshis, they came from different parts of the US,” Shakib said at the post-match presentation. “They were supposed to fly back today but they stayed back because we won yesterday. Thanks to them because we never felt like we were away from home. Obviously, it was a long series and in the end the support we got, I think they played as 12th man.”

Shakib was declared the Man of the Series for the role he played in a stirring pair of victories in Florida. The captain scored 84 runs and took a combined 3 for 41 in eight overs across the final two wins, his bowling figures especially impressive considering the traditionally high-scoring venue. He said his 60 off 38 balls while batting first in the second T20I spurred him on to deliver with the ball as well.

“I think I was batting well throughout this series,” Shakib said. “I was hitting the ball well. I think that gave me a lot of confidence. That helped me bowl well and captain well. I was planning to prepare myself as well as I can to perform well and as I said, really proud of the boys the way they showed their character.

“Everyone, even the guys who are not playing put the hard yards, they are always in the game for the team. Whenever they are needed, they try to help the team out so nothing more I can ask from the team.”

The captain was especially proud of the way the rest of the squad stepped up after being behind in the series heading into Lauderhill. The openers provided fiery starts with Tamim Iqbal scoring 74 off 44 in the second match and Liton Das hammering 61 off 32 in the decider. Mustafizur Rahman also took three wickets in each win.

Nazmul Islam took 3 for 28 in the second match but suffered a freak injury on the third ball of his spell the next day when he got tangled up with Chadwick Walton at the non-striker’s end while attempting a diving stop to a straight drive from Marlon Samuels. Walton momentarily lost his balance after Islam’s dive resulted in a collision and he inadvertently stepped on Islam’s left hand, with the spikes producing a nasty gash to force Islam off the field for the rest of the night. But Soumya Sarkar stepped up to fill in his overs and struck two balls later to get Walton. It was emblematic of a collective team effort.

“After losing the first game, we showed a lot of character,” Shakib said. “We had the belief that we can win matches. Everyone had that belief that we can come back strongly and win matches. We played against the world champions and the way all the boys showed their character, we take a lot of confidence from here on. Because our record doesn’t show this, it’s a great performance especially in T20 so from now on hopefully we can kick on.”

The T20I series win was part of a limited-overs double for Bangladesh, having won the preceding ODI series 2-1 as well. Considering the way West Indies dominated Bangladesh in the two Test matches to start the tour in a 2-0 sweep, Shakib was proud of the way his squad rallied to end the tour and hoped it would be a spark for more consistent performances away from home.

“We have been doing really well in ODIs for the last three-four years,” he said. “Since the 2015 World Cup I think we have been really good. This T20 series will give us a lot of confidence that we can beat the big teams and we know now how to win matches, especially tight, tight matches.

“We kept on losing so many matches that went close but now we are starting to win. This is the confidence we can take. Obviously, we need to work on our Test cricket but obviously back home we are doing really well. Just now we have to go overseas and try to do our best and get some results.”